Full-day kindergarten will be on ballot 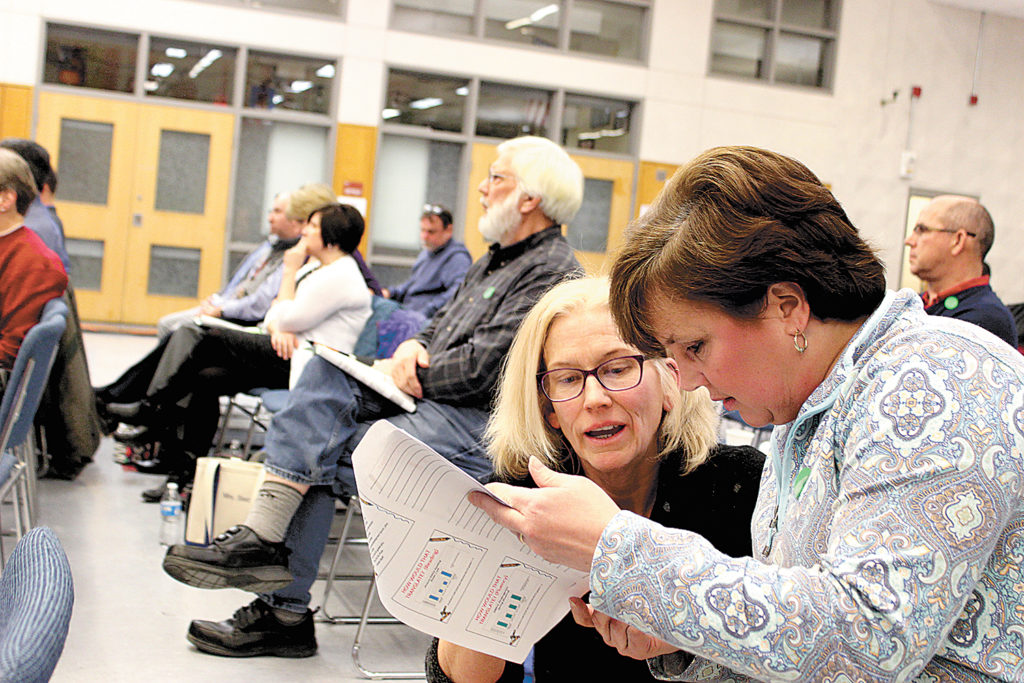 MILFORD – Full-day kindergarten will be on the school ballot with mixed support from the school board and budget committee.

The $582,500 proposal would pay for starting a full-day program at Jacques Memorial School beginning in the 2018-2019 school year.

The school board is divided, 3-2 in favor, and at the Feb. 8 school district Deliberative Session, budget committee Chairman John Wynne, who had abstained, said the committee’s most recent vote was 4-3 in favor.

Superintendent of Schools Robert Marquis told the 33 voters present that Milford children are falling behind with only a half-day program, and it takes them until fifth grade to be where they should be socially and academically.

Rick Wood, a former school budget committee chairman, asked for data showing public kindergarten is better than private. Board member Robert Willette questioned whether 5-year-olds have the stamina for an all-day program and Steve Takacs talked about how years ago kindergarten was just for learning socialization skills.

Bob Thompson, of the budget committee, said “the research is overwhelming” that there is a significant increase in reading and math skills with full-day, particularly for low-income kids.

“You have to ask why 80 percent of New Hampshire schools offer full-day programs,” he said. “A good private kindergarten in Milford can cost $800 a month,” putting it out of reach for low-income families.

“Let’s not have the dubious achievement of being the last” town in New Hampshire to have an all-day program, Thompson said.

And Selectman Gary Daniels asked school officials about working with private kindergartens to coordinate the curriculum.

Marquis countered saying part of their intent is to “level the playing field for all children,” and having the only option be private schools doesn’t do that.

This is the second year in a row kindergarten expansion is on the ballot.

Last year voters approved a plan for a tuition program, with families who could afford the $510 a month supporting the cost of children getting free and reduced lunches, but not enough children signed up.

The district’s $41.2 million operating budget, up by 1.54 percent, also gets a mixed verdict from the budget committee. And though the default budget is actually higher than the budget, Wynne said the committee, is definitely not in favor of the default, and the four committee members who voted no “felt they are taking a principled stand.”

Daniels warned the committee that the message they are sending is in favor of the higher default budget.

He made an unsuccessful motion to cut the total by $200,000, decrying the increase in teacher salaries and benefits while the district has lost more than 500 students over the past 10 years, and an default budget that forces voters to pass the operating budget.

School board member Jennifer Siegrist blamed the state Legislature, which responded to the recession 10 years ago by ending all retirement and school building repair funding. State Rep. Joelle Martin said Milford should demand more from Concord.

“The adversarial dynamic” pitting taxpayers against schools “doesn’t have to be that way,” she said. “We can have tax relief and high quality schools.”

If all warrant articles, including the budget, pass the school tax rate would increase by 57 cents per thousand, or 2.65 percent.

The Deliberative Session is the first of a two-part voting process that continues with ballot voting at the Milford Middle School on Tuesday, March 13 from 6 a.m. to 8 p.m.