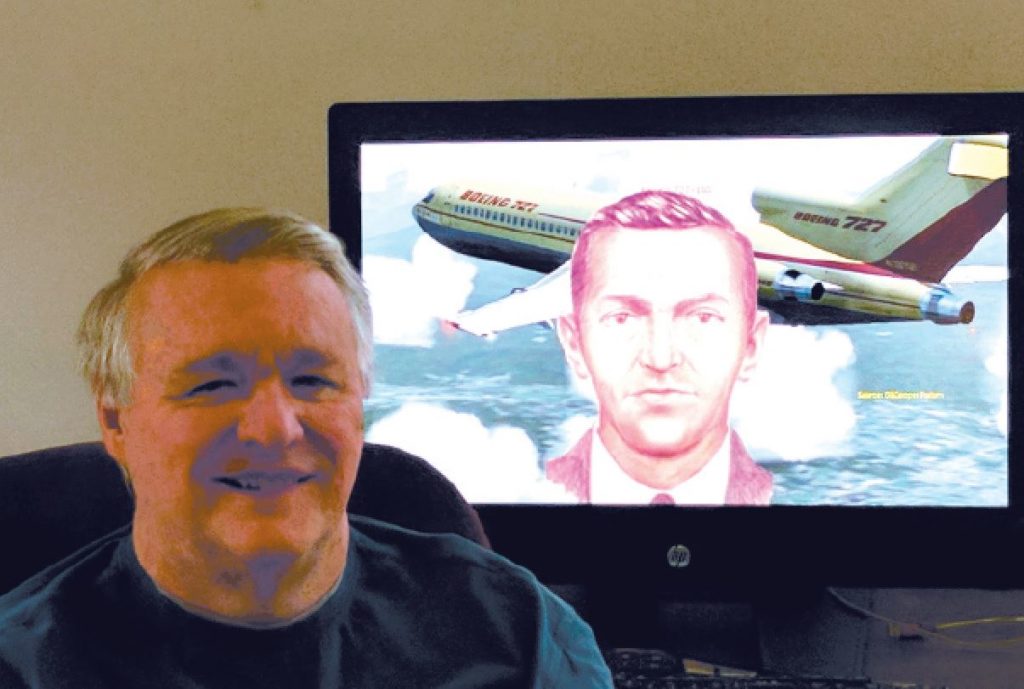 Courtesy photo Bill Rollins will be at a book signing for his new book about legendary skyjacker D.B. Cooper at Milford’s Toadstool Bookshop on June 3.

MILFORD – In November 1971, a Northwest Orient Airlines flight was highjacked between Portland, Ore., and Seattle, and the assailant parachuted from the Boeing 727 into a forested area with $200,000 in ransom money.

The man was never seen or heard from again.

In 2016, after what the FBI calls one of its longest and most exhaustive investigations, the agency gave up.

It’s a mystery that has fascinated people for 45 years, the only unsolved air piracy in commercial aviation history.

Bill Rollins thinks he knows the identity of the skyjacker the FBI dubbed “D.B. Cooper,” and he has written a book that lays out his theories.

Rollins, a professional engineer and inventor from New Boston, had a casual interest in the case until last July, when he watched a History Channel program called “D.B. Cooper: Case Closed?” in which the FBI said it called a halt to the investigation.

So Rollins decided to look at the evidence, particularly one piece: a necktie that Cooper took off before he put on a parachute and a 22-pound bag of cash and jumped from the plane. The tie had traces of rare earth materials, including titanium, that were only used in a few industries.

Perhaps the FBI had underestimated its quarry? And if it had, why would a smart, highly skilled professional risk his life in such a spectacular way?

Following that line of inquiry, Rollins came to believe that all of the clues point to Cooper being a professional engineer and retired Army major named Joe Lakich. He has written a book about the case called “The Elusive D.B. Cooper: How He Escapes.”

“Something tragic happened to this man,” Rollins said in a phone interview.

Something indeed tragic happened to Joe Lakich. Less than two months before the Northwest hijacking, his daughter died in another airplane hijacking. Susan Lakich and the pilot were shot and killed by her estranged husband after federal agents shot at the small plane instead of allowing it to refuel at the Jacksonville, Fla., airport.

Rollins said Joe Lakich had warned the FBI that George Giff, the husband, was emotionally unstable and always carried a gun. Later, the case would become an example of how not to deal with a hijacking.

According to Rollins’ theory, the Northwest hijacking served as an elaborate form of revenge against the FBI. The agency considered more than 1,000 suspects and examined countless items in a fruitless, decadeslong search, all while the mysterious D.B. Cooper became a folk hero.

There was even a D.B. Cooper’s Restaurant in Nashua at one time, with the story of the hijacking on the front cover of the menu.

“Lakich was extremely critical of the FBI, and in a television interview, he said it ‘made a gross error,’ “ Rollins said.

Lakich died in February. Rollins said he doesn’t consider him a criminal, “just an ordinary man who was pushed to the brink.”

Rollins will be signing his book at the Toadstool Bookshop in Milford at 3 p.m. Saturday, June 3.

Another local author, Cathy Burnham Martin, will be signing her newest book, “The Bimbo Has Brains,”for readers struggling with challenging relationships or wanting to make a good relationship stronger.

Book signing for “The Elusive D.B. Cooper: How He Escapes” by Bill Rollins

Where: Toadstool Bookshop in the upper Lorden Plaza in Milford.