Bedford Lions Club: All you can eat 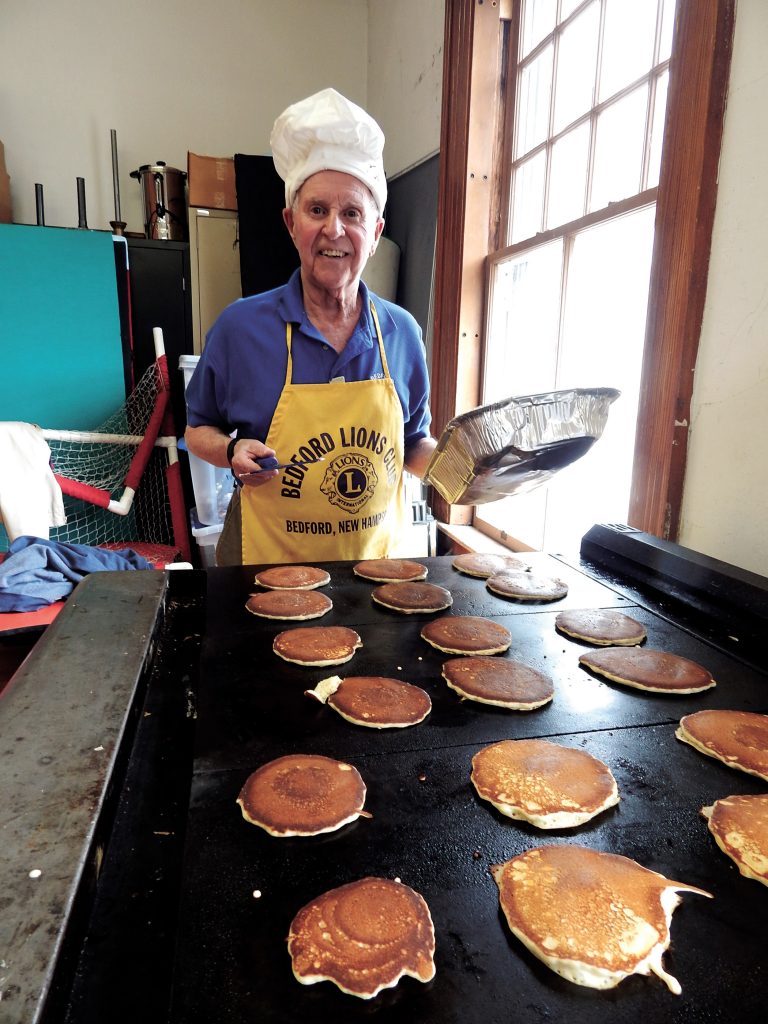 Photo by LORETTA JACKSON Volunteers manned the grill to produce dozens of tender pancakes, while waffles were made elsewhere.

The aroma of warm pancakes and waffles wafted towards guests from many towns as they added to their plates plump little sausages, or a helping of eggs.

It was the day of the 41st annual “All You Can Eat” pancakes and sausage breakfast hosted by the Bedford Lions Club to benefit the Bedford Lions Charitable Foundation. Club secretary Jeanne Bellemore and others replenished the coffee and condiments and packets of sugar with speed and grace.

“We really appreciate the work of the organizations that benefit from this event,” Sills said. “The food pantry, high school scholarships and many other recipients are assisted.”

Egg-cooking queen Mary Murphy, a member for around 10 years, gently covered her cooked eggs with sheets of foil.

“Some of the proceeds go for glasses and hearing aids and eyesight screenings with a special camera,” she said.

“This is a great event because its local,” Juliano said. “A lot of people have never been to the old town hall.”

Ernie Henrichon, club treasurer and a member since 1975, manned the cash box. He estimated around $1,200 in contributions was raised.

Meanwhile, Mo and Gary Redmond, of Bedford, took some time away from a home renovation project. They chatted with a first-timer who turned out to be a friend of relatives in the Redmond-Catania family.

Elsewhere, Valerie Witzel Tarbell commemorated with pancakes her dad, the late Walter Witzel, a club president three times. She said they both shared last year’s event. He passed on in November.

“We were here together, last year,” Tarbell said. “We always came, no matter what.”

Elda Cordero-Goodman, chairperson of the event since 1992, displayed a towering raffle basket. Thanks went out to Copper Door, Frederick’s Pastries and Starbucks, along with Carrabba’s Italian Grill, Dunkin’ and others for donations totaling around $200.

Youngsters paused fairly often at the table where pastries awaited that included cherry-topped danish, chocolate chip cookies and other delights. The desserts beckoned anyone with a sweet tooth, or full dentition. Among them were young locals Cadence Rivers, age 5, and her friend, Mia Gittleman, also age 5.