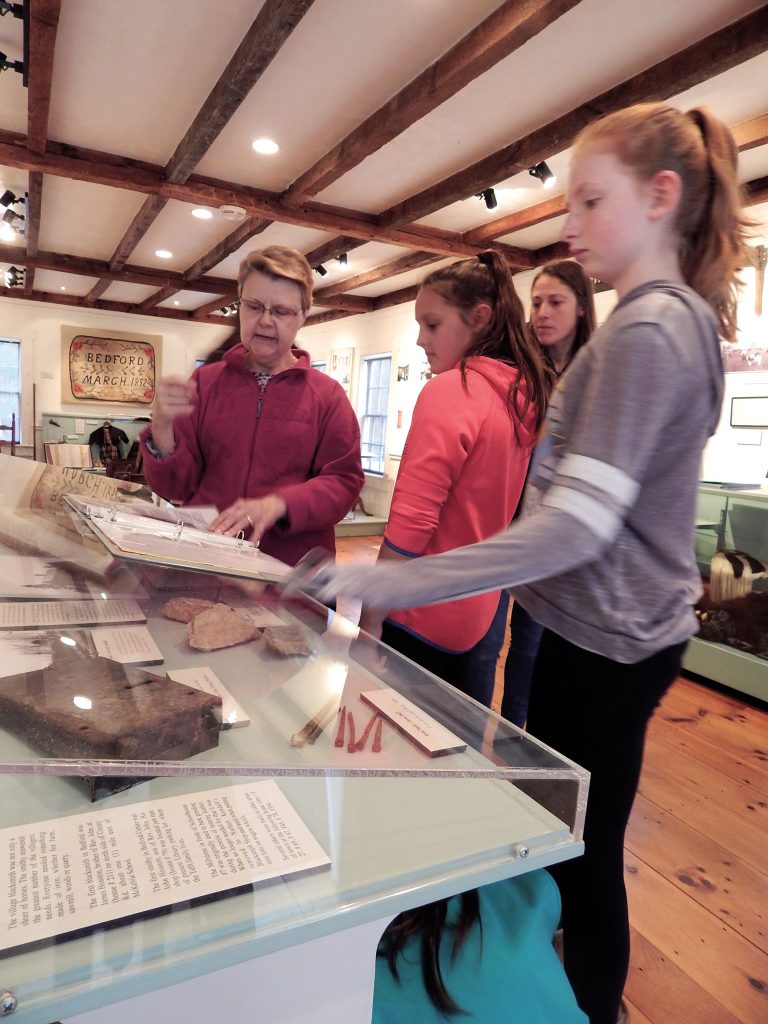 Photo by LORETTA JACKSON Jane Blais, left, a former board member of the BHS and an enthusiastic volunteer, describes some of the farming tools preserved in the BHS museum to members of Scout Troop 12385, based at McKelvie School.

The substantial progress of the renovation of the Stevens-Buswell Community Center on Amherst Drive will be showcased 2-4 p.m., on Sunday, April 28, during the Open House at the site, 18 North Amherst Road, adjacent to the Bedford Historical Society’s museum and gallery, 24 North Amherst Road.

The Bedford Historical Society since 1967 has been a hub for seekers of information about town history. Members of the BHS offer visitors a gallery and museum filled with memorabilia and artifacts. The restoration of the Stevens-Buswell structure, the town’s first two-room school built in 1921 and now named for war heroes, is a cherished commitment embraced by the BHS.

A recent gathering of scouts from Troop 12385 brought together scout leaders, girl scouts and some historians from the BHS. The scouts are learning about town history as a part of a project that will glean for them the Bronze Award, a lofty prize in scouting.

Jane Blais, a volunteer and former BHS board member, showed the girls on April 3 some of the society’s portraits and ledgers and documents. She said Bedford once was home to dairy farms and cheese-making businesses.

“Cheesemaking and dairy farming were the main thing,” said Blais. “The goods were sold at stores and that part of local industry is a part of Bedford’s history.”

Troop leaders Sue Russell and Pamela Gibson noted that the girls had been busy volunteering at the Educational Farm at Joppa Hill, in an effort to gain knowledge of the town’s history that would augment the push for the Bronze Award. The Joppa Farm site, a working farm on 35 acres owned by the town, is a backed by a nonprofit geared to preserving the region’s agricultural history through numerous programs and projects.

“The girls are learning the personal history of farming,” said Russell. “They are mastering lifelong skills including how to research a topic and find information.”

Jill Russell, age 11, a student at McKelvie school, admired a planting calendar that showed each season of the year and the various duties a farmer needed to perform during each span of time. Planting and reaping weeks were indicated.

“All the days of the week were there,” said Jill. “It tells the farmers what they have to do at different times of the year.”

Claudia DeLeo, age 10, who also attends McKelvie School, site of the troop’s twice monthly meetings, was drawn to investigate the spinning wheel and tools and farm implements on display in the BHS museum.

“It was very historic,” said Claudia. “I learned so much about the town.”

Information on the Bedford Historical Society is available online: bedfordhistoricalnh.org.