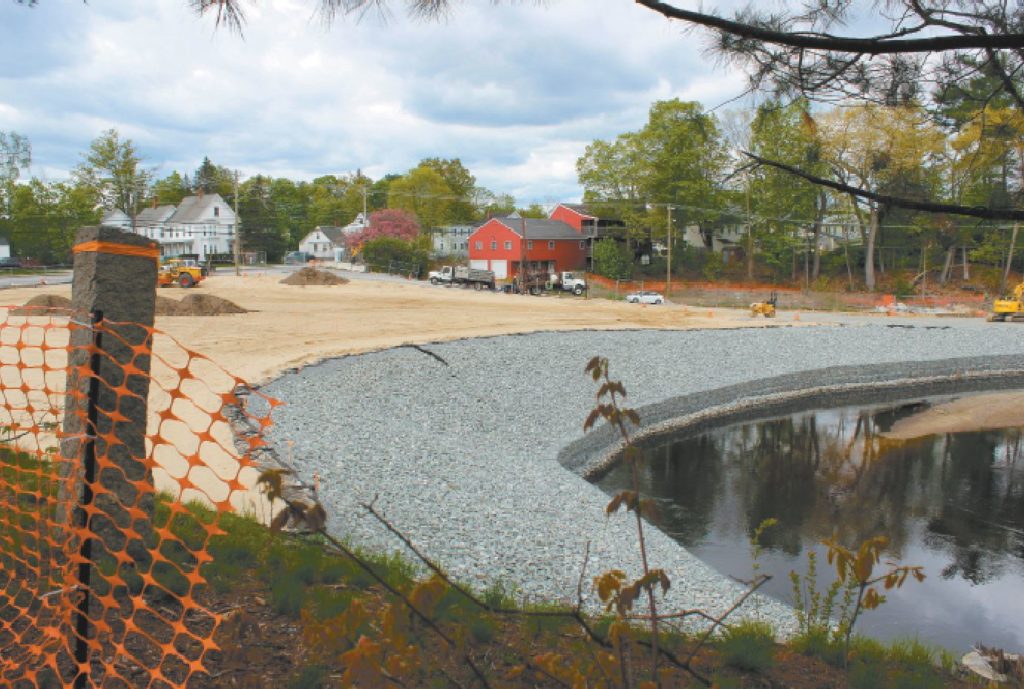 Photo by KATHY CLEVELAND Cleanup work for the Fletcher Paint Superfund site is wrapping up, and Milford officials are talking about plans for the Elm Street property. The view is from the adjacent cemetery.

MILFORD – Selectmen were given their first look at a plan for a Vietnam War memorial for the entrance to Keyes Memorial Park.

The memorial would be on top of the Fletcher Paint Superfund site, where cleanup work is complete.

Jerry Guthrie, a member of a group calling itself the Keyes Memorial Park Expansion Special Interest Group, showed drawings at the selectmen’s meeting on Monday, May 8, for a 40-foot long granite memorial wall, with engraved illustrations that tell the story of the war, including the Tet offensive, the bombing of a village and the fall of Saigon.

The retired landscape architect and Vietnam veteran said the Vietnam memorial would be a more private side, and that its street side would have sections illustrating American values with iconic American images, such as the Grand Canyon and an American eagle. Another section would illustrate the war on terror, with a timeline beginning Sept. 11, 2001. It would be paid for entirely with donated money, he said.

John Weidman, the Brookline artist who sculpted the eagle on top of Milford’s Eagle Hall in 1999, told selectmen at the meeting it’s too early to estimate a cost.

Town officials, however, said it’s important to come up with a cost, and donors will want to know when the project would be finished.

With an estimated cost, fundraising will be easier, Selectman Gary Daniels said.

“People will want to know if it will be done in their lifetime,” he said.

Board Chairman Mark Fougere said it would be nice to see something beautiful at the site instead a pile of rubble and a chain-link fence. But first, he said, the project needs public support, and voters next March need to approve fundraising. Get the drawings on a website and get feedback, he advised.

“This has to have a public vetting,” Fougere said.

“It’s been 41 years since the fall of Saigon, and it’s time these men were recognized,” he said.

Janet Langdell, of the Planning Board and the Keyes Park Expansion Committee, said some people have told her they are concerned about the war themes.

“We were always behind a Vietnam memorial,” she said, but “the details are new to us.”

The General Electric Co. is paying for the one-acre cap that covers the Superfund site, but isn’t paying for the park or for any memorial the town wants to put there.

Town Administrator Mark Bender said topsoil has been applied to the lawn area and it will be seeded by July 4. Parking spaces will be created along Keyes Drive, the entrance to the town park, and there will be more parking along the baseball field.