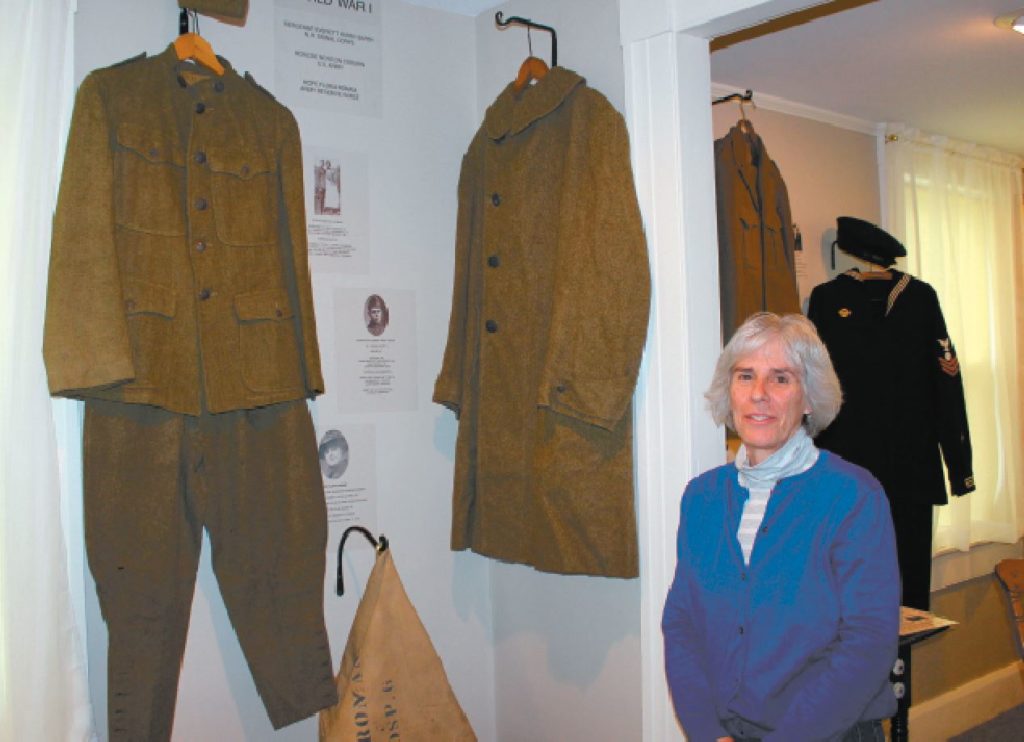 Photo by KATHY CLEVELAND Charlie Annand stands in front of World War I uniforms. Annand led the Carey House Museum’s effort to create an exhibit to remember men and women who served in wars, ranging from the Revolutionary War to more recent conflicts.

MILFORD – A Revolutionary War memoir by a Wilton soldier tells of his troop discovering a 2-year-old boy who Indians had captured and left behind.

The same day, a cow wandered into the troop’s camp in upstate New York, and one of the soldiers was “released from duty to care for the child, and directed that the milk of the cow be appropriated for its sustenance.”

The typed narrative, framed under glass, follows the story of Joseph Gray, who was 16 when he enlisted in the Continental Army and served under Capt. Isaac Frye in the Third New Hampshire Regiment. It had been stored upstairs in the museum of the Milford Historical Society and then forgotten. It’s the museum’s only item from the Revolutionary War, and Charlie Annand is thrilled to have it.

For the last two months Annand has been putting together an exhibit of local men and women and their war service. On Memorial Day, from 9:30 a.m.-1 p.m., the new exhibit and the entire Carey House – the Historical Society’s museum – will be open to the public.

All of the items are arranged in chronological order. Annand and other volunteers tried to match photos with items and uniforms. For example, a photo of Hope Flora Romani is near the duffel bag that the World War I nurse used.

“What’s great is that we’d start out with one item, and then somebody gives you a story about it,” Annand said during a recent tour of the exhibit.

For instance, when she and Marcia Nelson were updating the clothing in storage, they came across George P. Holt’s Civil War greatcoat and uncovered a canteen with “1862” painted in a bull’s-eye on it.

Dave Nelson, a Civil War expert from Wilton, identified the age of the canteen, but wasn’t sure about the date painted on it. Then society President David Palance steered them to a photo of a soldier wearing a coat that was similar to the one in storage. The back of photo is inscribed by Geo. P. Holt before it was given to the widow of Col. Oliver Lull, a Civil War soldier who was killed in the war.

The photo clearly shows Holt in his greatcoat with the painted canteen strapped around his neck.

All of those items are now on display, as is a shipping trunk that Annand thinks belonged to Carlo J. Calderara, of Milford. Inside the trunk is red, white and blue bunting that may have been used to decorate buildings on Union Square for the parade to welcome home soldiers after World War I.

From the beginning, Annand’s goal was to make sure everything on display is correctly labeled and to have an exhibit that is easily accessible for people who can’t go upstairs.

To keep things organized, each item is labeled with a unique “accession number,” as major museums managed by a professional staff do. Marcia Nelson and Barbara Tortorelli helped Annand catalog every item.

There is a Navy peacoat that belonged to Vietnam War veteran Jerry Guthrie and a camouflage jacket from the Iraq War donated by R. McIntire, but with the name “Smiley” on the chest.

The World War II Naval uniform of Timothy M. O’Connell was loaned to the museum as a result of a phone call.

“There is a pair of canvas gaiters on display, and these were simply marked ‘Tim O’Connell,’ “ Annand said.

So she called his son, former Milford state Rep. Tim O’Connell, to gather more information about the owner and the age of the gaiters.

“After describing the upcoming exhibition to him, he volunteered that he had his father’s Navy uniform from his service in the Seabees,” she said.

O’Connell loaned the uniform to the museum. It is now hanging on the wall near a picture of his father in uniform with his wife at his side.

“I was thrilled to get that uniform, and it is in such good shape,” Annand said.

They are still looking for some history and perhaps a photo of Dorothy Daniels. She was a Red Cross Motor Service volunteer during World War II, but they don’t know where she was stationed. Volunteers in the Motor Service transported the sick and wounded, delivered supplies, and took volunteers and nurses to and from their posts.

Most of the exhibits are intended to be as touchable as possible. Annand said she would love for people to linger in the rooms and soak up the history.

The only thing from the Korean War is an “Eisenhower jacket” that had belonged to Donald McIntire, a Marine who lived in Milford after that war.

But she is justly proud of the work done by her and other volunteers, including Palance and his son Ben, who did a lot of heavy lifting.

“It has come out so well, and people are enjoying it so much,” Annand said. “It’s been a lot of fun, and so wonderful to see it all done. … This has been a huge, huge community effort.”

After Memorial Day, the exhibit will make way for an exhibit called “Journey to Freedom,” about the Underground Railroad and Harriet Wilson, of Milford, who’s considered the country’s first female African-American novelist.