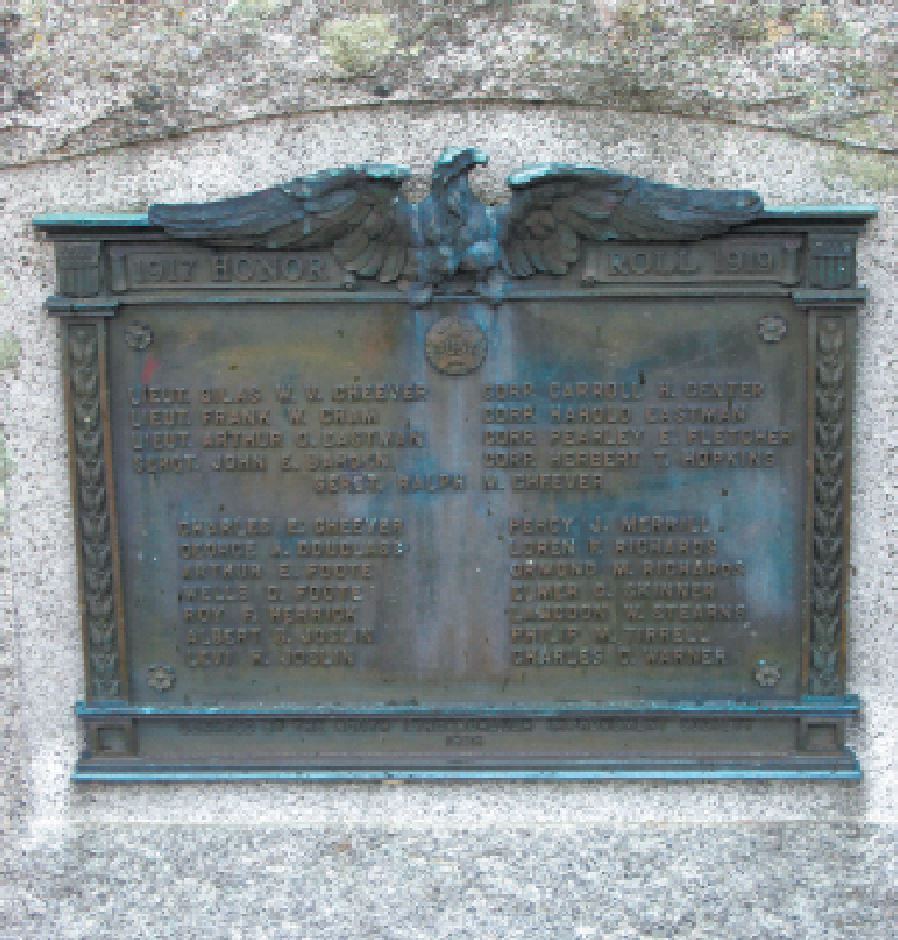 Photo by JESSIE SALISBURY The Lyndeborough Village Improvement Society erected this monument in 1926 to honor those who had served in World War I. It was originally in front of the library, and moved to the common when the library was expanded several years ago.

Memorial Day is dedicated to remembering those citizens who died in our various wars.

But most of the focus now is either on the Civil War, when the tradition of decorating graves began, or on World War II. Between them was “The War to End All Wars,” known now as World War I. It is frequently called “the forgotten war.”

This year marks the 100th anniversary of the U.S. entry into that war.

It is forgotten, perhaps, because about 25 years later we were involved in a much larger war.

Although the war began in Europe in 1914, the United States didn’t enter until Aug. 6, 1917. The war ended Nov. 11, 1918. That date was known as Armistice Day for many years, but changed to Veterans Day to honor those who had fought in wars since then.

World War I was the start of the Selective Service and a variety of home-front organizations, bond drives, savings stamp programs in schools and civil defense programs. People were encouraged to have gardens and raise their own food.

One of the legacies of that war is the American Legion. (The VFW, Veterans of Foreign Wars, was founded in 1899.)

In Wilton, Roy Bent Post 10 was formed on July 25, 1919. Bent, the only Wilton boy to die in the U.S. service, died of disease in Oregon, where he was stationed with the Air Force. Two other residents are believed to have died while serving in the Canadian army.

Bent was buried in Vale End Cemetery with full military honors conducted by the Lafayette Artillery Company, the only military organization available.

Wilton’s memorial to Veterans of All Wars was dedicated on May 30, 1924, on land donated by Henry L. Emerson, a veteran of the Civil War. The monument is in a tiny park between Forest Street and Stoney Brook, and now contains several other monuments.

The two trench mortars beside Town Hall were given by David Barry in 1932.

The Legion Post home on Maple Street is the former Liberty Christian Church.

In Milford, Ricciardi-Hartshorn Post 23 was formed on July 15, 1919, named for the first two Milford men who died: Rosario Ricciardi and Louis Sumner Hartshorn. Seven men gave their lives, four in battle and three from illness.

The war is also known for the worldwide influenza epidemic that killed thousands of people.

Milford’s World War I Memorial was erected on the town common in 1927 to honor all of the men. In 1925, a little triangle at the junction of Union and Beech streets was dedicated to Louis Hartshorn.

The Legion met in various places until it built its post home on Cottage Street in 1956.

The Lyndeborough Monuments Committee, which oversaw the placement of the monuments on the common when they were moved from the library, is currently raising funds for a new stone placed between the World War I and World War II/Korea stones. This one will honor Vietnam veterans, plus those who served in “all the little wars since.”

Lyndeborough’s World War I Memorial monument was erected in front of the Tarbell Library in 1926 by the Village Improvement Society. The list was compiled soon after the war, but grew to include men who had served in other places and men who were living in town at the time. It lists 22 men, none of whom died in the war.

May there be no need for any more monuments.