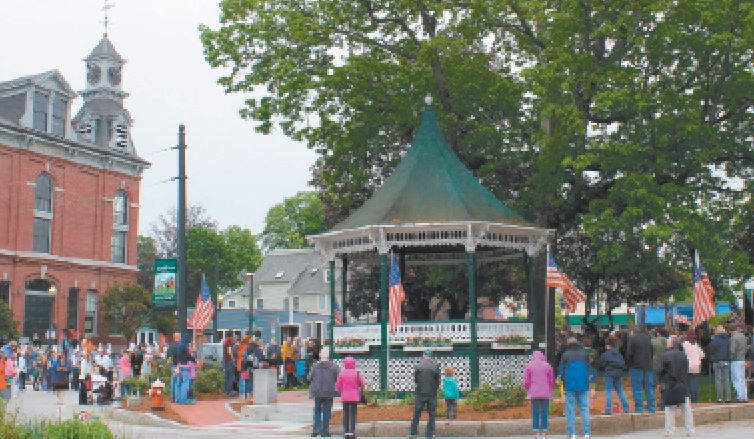 Despite darkening skies, a crowd gathered on the Milford Oval for the annual Memorial Day ceremonies.

LYNDEBOROUGH – Lyndeborough’s Memorial Day ceremony on Sunday, was traditional: a parade with veterans, patriotic music, Scouts and fire trucks, and the Lafayette Artillery’s 1844 cannon pulled by a team of horses.

Vietnam War veteran Paul Martin talked about the symbols used in military funerals: the three rifle shots, the playing of taps (“extinguishing the light”), and how and why the flag is folded like it is before being presented to the family.

Walter Holland, captain of the Artillery Company, spoke of the flags placed in the cemeteries – 307 of the in the town’s eight cemeteries. Those veterans are from all of the wars beginning with the Revolution on.

A box of last year’s flags, “which served a year in the cemetery,” were offered to residents who wanted them to display.

“These are special flags,” he said. “Put one on your mailbox.”

Music was provided by the Black River Fife and Drum Corps.

Earlier in the day, observances were held in the Center and South cemeteries byt the Artillery Company.

The library trustees held a book and bake sale, and the town’s new Democratic Committee provided bottled water and information.