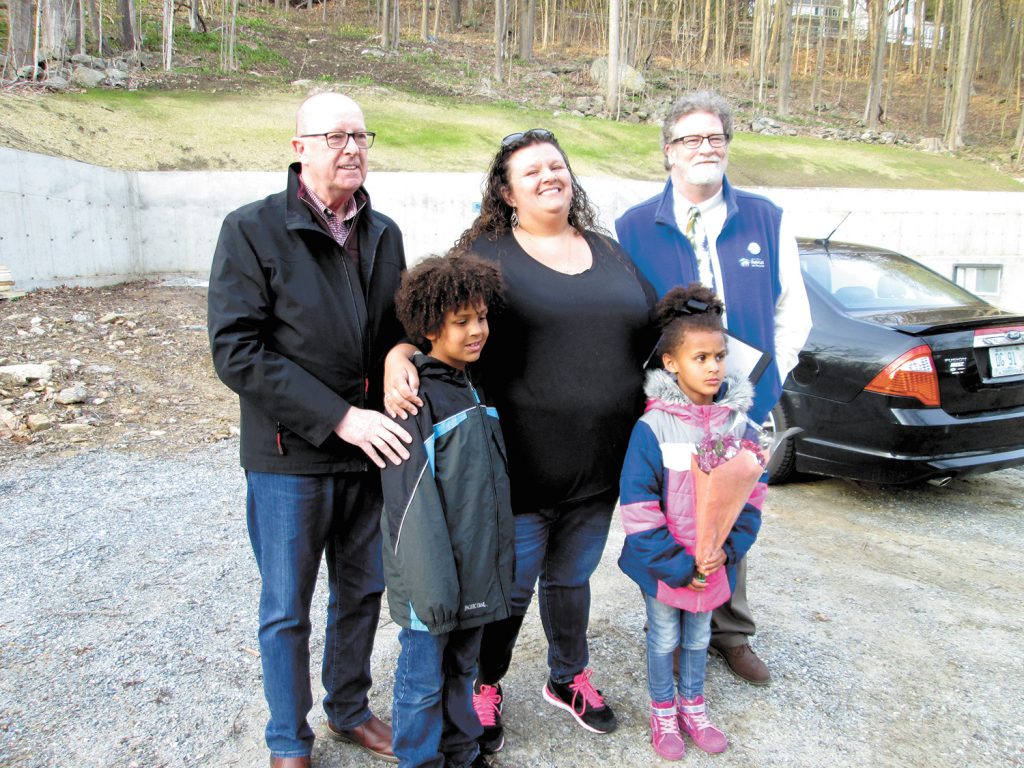 WILTON – Resident Jocelyn Benson will be a homeowner, once the house is built at 19 Pleasant Street by the volunteers who work through Habitat for Humanity. She and her children, Avian, 8, and Avery, 6, learned of their selection at ceremonies held at the site on Wednesday, April 30. The announcement was made by Scott Slattery, executive director of the Greater Nashua Habitat For Humanity.

Benson was unaware of her selection prior to the presentation, which was greeted by joyful tears from her and members of her extended family. About two dozen volunteers and well-wishers had gathered at the site to take part in the delivery of the news.

Receiving a house from Habitat is not easy. Board Member Nora Boyle, chairman of the selection committee, said they began the selection process in February, deciding among three applicants.

There are guidelines, she said. “The qualified family has to meet resident and income requirements, be willing to participate by putting in 350 hours of ‘swear equity,’ and make a nominal down payment of $1,000. We will sell the home to them with a mortgage they can afford.”

The house will take about 15 months to complete, Boyle said. “Volunteers work two days a week. Much of the labor and materials are donated.”

Town Administrator Paul Branscombe has been named Homeowner Coordinator and will work with Benson through the building period.

Slattery said, “To be a Habitat Family is not an easy thing. We are so blessed with our wonderful volunteers.” He added “a big thank you to the Town of Wilton” which donated the lot to the program last year.

The house site, previously an unsightly space overgrown with brush and containing the remains of a former house cellar, has been cleared, a large tree removed, and a foundation and retaining wall installed.

This is Habitat’s second house in Wilton. In 2010, a house was built on the corner of Russell and Maple Streets.