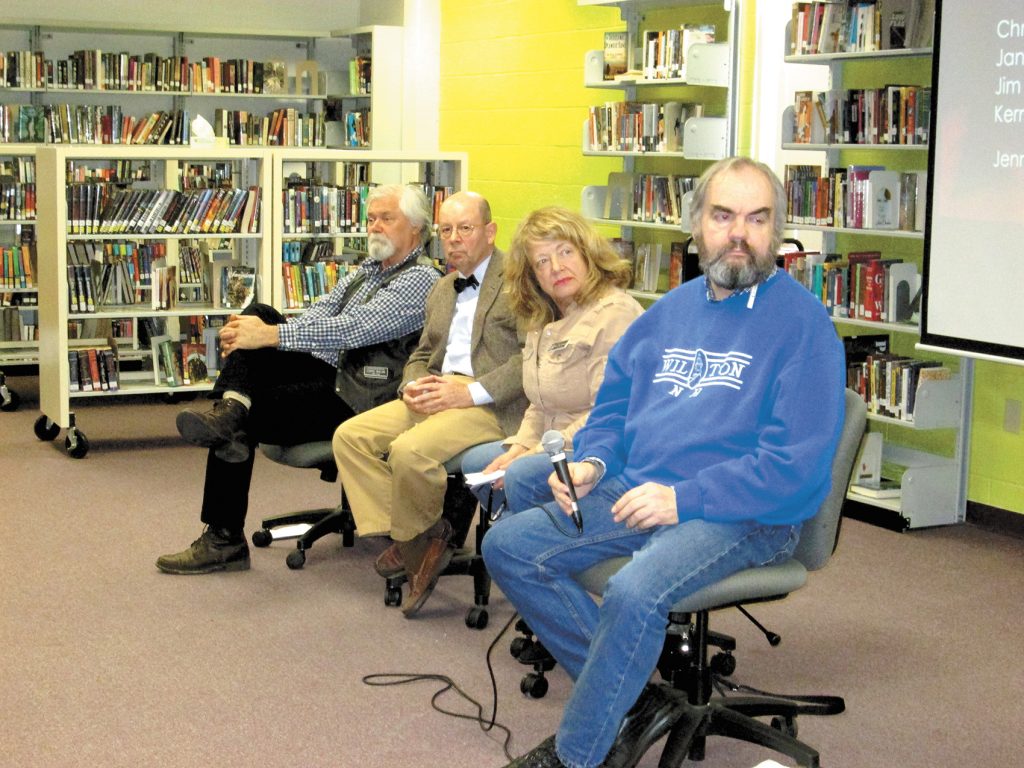 WILTON – The forum at the Sustainability Fair on May 4 was billed as “dual purpose.” Moderator Jennifer Beck said, “Economic health doesn’t have to come at the expense of the environment,” and cited a University of N.H. project, “Nature Economy.” She added, “You can have people, good health, and can preserve natural resources. You don’t have to sacrifice one for the other.”

The four legislators who made up the panel agreed. A dozen people attended and many also participated.

Kermit Williams of Wilton, serving in District 4, said, “We need to preserve irreplaceable resources.” One way is through the state LCIP (Land and Community Investment Program) grants. A proposal is currently in the legislature to raise the real estate transfer tax to $35, with the raise going to LCHIP.

Chris Balch, also of Wilton and in Dist. 38, discussed the legislative stand on renewable energy. “There are 30 bills dealing with sustainable energy. We need a coordinated plan, the governor has called for it.” He noted, “We will have to replace discontinued power plants. Wind is free. We need better storage batteries for solar energy.”

Jan Beaulieu of Manchester talked about “Nature Deficit Disorder,” the growing realization that children who do not get outdoors, do not experience nature, who spend too much time inside and playing games, do not do as well in school and tend to suffer from depression. It is also linked to the rise in childhood allergies.

“(Doctors) now believe it is a disorder. Get (the kids) outside, walking, looking at trees, listening to birds, getting into the dirt, and getting a passion for preservation.”

She agreed we need to protect the land, to be advocates. “Parents are afraid to let the kids play outside, they might get hurt, or picked up, (but) they need to experience the simple joys.”

Jim McConnell, a former legislator, is an adamant foe of pipe lines crossing the state and fought against Kinder-Morgan. Asked if the plan would return, he said, “Forget Kinder-Morgan. The price of overseas natural gas has collapsed. I don’t think they can make a case for coming back. The obstacles are great. If you have a project,” he said, “or are opposed to something” contact you legislator.

Williams displayed a thick sheaf of papers, the legislative rules from (the Department of Environmental Security). “The legislature works on paper. For every page of legislation, there are two pages of rules.”

He noted rules for wetlands: getting a permit for a project, definitions of wetlands and what can be done in each, lists of endangered species, mitigation which swaps one wetland for another. “Rules are a big part of the problem with preservation. There are those who want to preserve, and those who want to do business. Those who come to testify (at a public hearing) are those making money.

People have a chance to comment, but most don’t. It is important for people to speak up.”

McConnell said he was trying to get cameras into committee hearings so people can watch. “The opposition,” he said, “is mostly cost, but some don’t want people to know what they’re doing. We’re working for you and you ought to see what we’re doing.”

Merrimack resident George May, long-time preservation advocate, said every brook and stream should be identified. The Department of Transportation could put up a sign on every bridge they work on. “If you don’t indentify it, it’s hard to protect.”

The recycling problems were touched on – the current lack of markets.

Williams said, “There is a lot of technology being looked at,” particularly in new uses for glass and plastics.

It was suggested having “a free disposal day” for appliances and tires that now end up on back roads, disposed of by people who can’t afford the fees.

Beck repeated a philosophy stated at the beginning: Take care of the upstream problem, and you eliminate the downstream problem. It is something to consider and work toward.