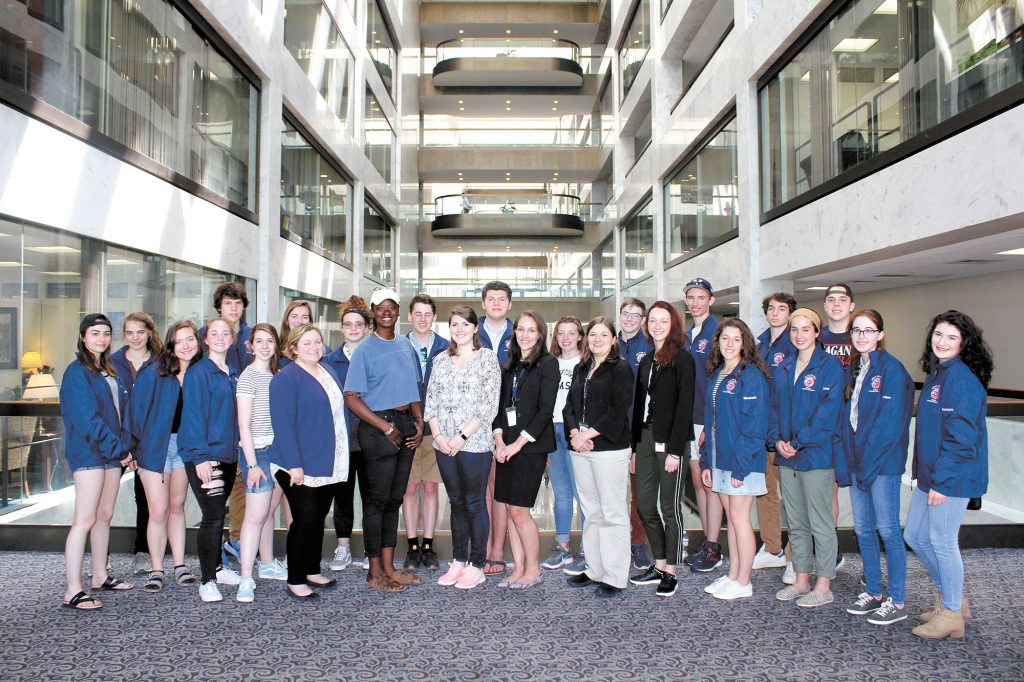 Members of the state champion Milford High School We the People team had a treat when they walked into Sen. Maggie Hassan’s, D-N.H., office during their academic trip to Washington, D.C. A number of former MHS We the People alumni were waiting to have lunch and a discussion with them. The MHS We the People team has been thriving at Milford since 1999. It’s a civics-based class that argues civic issues. It is administered locally by the New Hampshire Bar Association and nationally by the Center for Civic Education. Since then, Milford has won 17 state championships, including the last seven years in a row. A number of students have gone on to careers in government or related areas. More than 500 students have ‘graduated’ from the program since its inception at Milford, according to coach and teacher Dave Alcox, who said, ‘The importance of the program is not to set up students for a life of government or civil service, but rather to just be a responsible, engaged citizen. It doesn’t matter what profession you go into, ultimately you’ll retire. You’ll never really retire from being a citizen, so these skills are so fundamentally important if we want a flourishing democracy.’ The lunch was coordinated by Jillian Joyce, (WTP class of 2010 ) who currently serves as a professional staff member for Hassan. Joyce graduated from Villanova University and has been with Hassan since the senator’s days as New Hampshire governor. Also there were Pam King, (WTP class of 2005 ), a reporter for E&E Publishing, mock trial standout Kate Kennedy, who, after studying at Georgetown University, now serves as council member for the city of College Park, Maryland, and has been chief development officer of the League of Women Voters of the U.S. Kristen Bokhan (WTP class of 2005) graduated from Harvard Law School and now works for D.C. based law firm Kirkland and Ellis. Chelsea (Bucklin) Fairley (WTP class of 2006 ) graduated from Gettysburg College and the University of Maryland and is now an archivist at the Library of Congress. Jessica Wamala (WTP class of 2009 ) received a Rhodes Scholarship to Oxford University and is now working to ease currency exchanges around the world. Other D.C. alumni that couldn’t make it included Thom Parisi, (WTP class of 2006) who, after studying communications law at George Mason University is now working for a private law firm in D.C., Antonin Scalia Law graduate Jordan N Antonin Scalia Law grad Jordan Nye (WTP class of 2005), who works at Ackerman Brown Law firm, and Steven Place (WTP class of 2005).