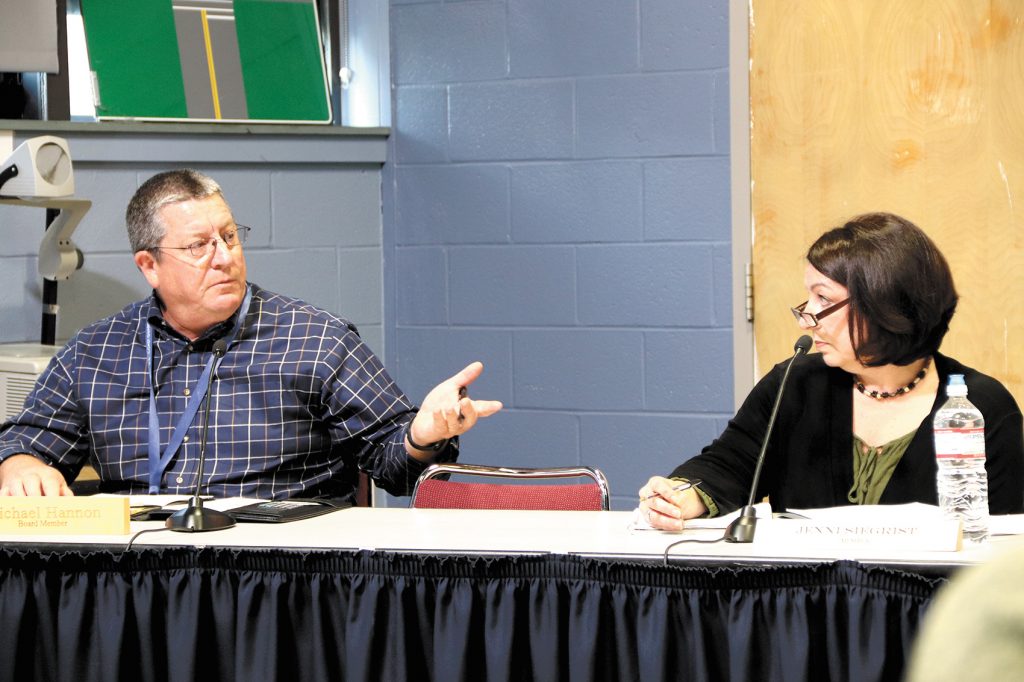 MILFORD – Residents wearing t-shirts, bearing the slogan, “Milford Strong,” showed their support, and at times, their dismay, at the June 17th Milford School Board meeting, over alleged text messages shared between board member Jenni Siegrist and former staff member Jamie Morgan were released to the public by an anonymous source, referred to as “Milford Citizen.”

The Cabinet Press has obtained a copy of the aforementioned text messages document. 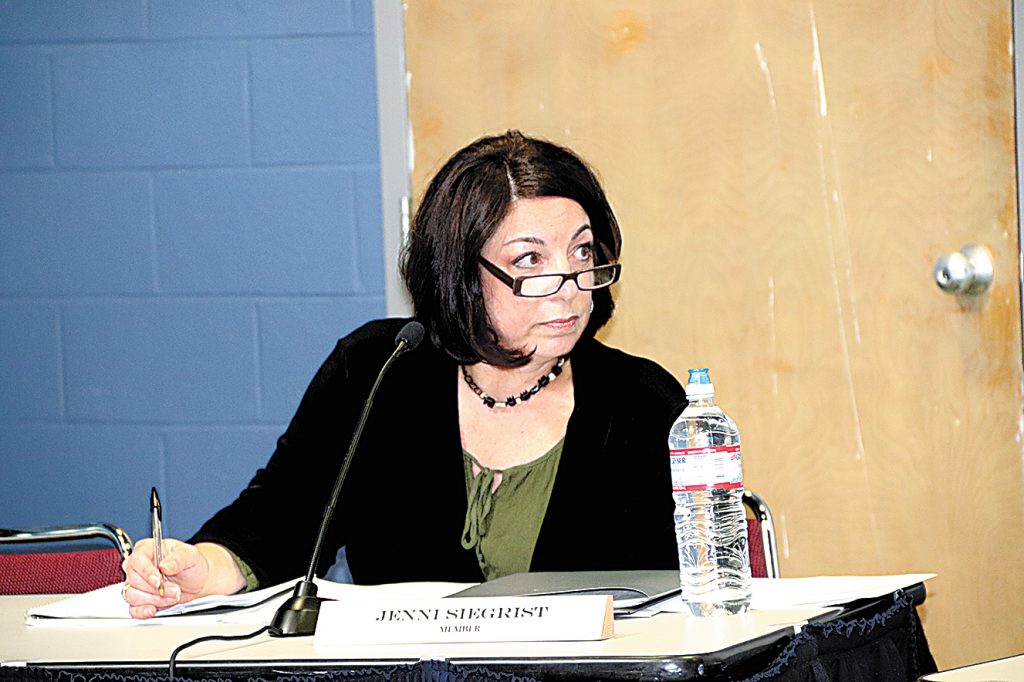 The meeting began with brief remarks from Dr. Huizenga, which included an announcement that Milford did receive Title 1 reallocation funds for summer programs from the state.

“We will not need to use funds from operational budgets,” she said. “We really worked on creating more data and putting more detail into the grant. That’s excellent news for us.”

The oft-embattled superintendent expressed wanting, “to continue an open dialogue, in the spirit of building bridges with the [teacher’s]association, a dialogue to be opened with our legal counsel and the association, to find common ground and move forward.”

Dr. Huzienga said she was excited about building a more collaborative and open communication and hoped to work to “turn a corner on this year.”

The hearing quickly turned sour when a discussion was opened regarding the conduct of board members. 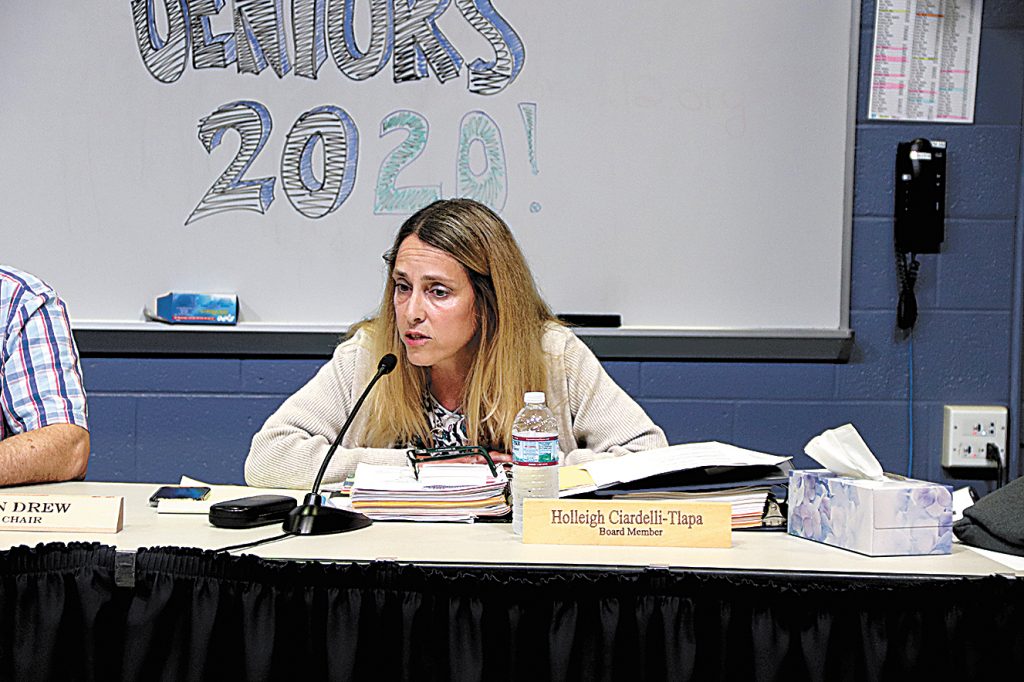 “As the board is aware, in the past several weeks, a former employee of the district has published private texts that were sent and received over a period of several months between a former employee and Jenni Siegrist, our board member,” said Carvell. “It is my understanding that the text messages that were released to the public have been taken out of context, to inflict political damage on a board member. Nevertheless, the message appears to contain confidential information regarding the district employees and hiring practices, that Ms. Siegrist only could have become aware of through her capacity as a board member. Maintaining the confidentiality of sensitive information is paramount in our roles as a board member. Failure to maintain confidentiality will result in this type of discussion.”

The board was reminded that the text messages involve active employees of district or students, and those individuals should not be referred to by name.

Carvell also asked that the board allow Siegrist to speak uninterrupted.

In a written statement, Siegrist read, “Recently the mass mailing of a series of libelous, poisoned-pen letters, regarding me, have been sent by Jamie Morgan, a disgruntled ex-employee of the Milford School district. In addition, some of these poisoned-pen letters were then shared by an anonymous person, ‘Milford Citizen.'”

Siegrist further read that the sole purpose of the release of these text messages was to defame her, “at all costs.” She called the release, “purely malicious,” and “intended to be spiteful and harmful.”

At no time did Siegrist take responsibility for her role in the conversation, one she said that was riddled with “half-truths.”

Siegrist elicited snickers from the crowd as she said, “above all, [they] do not provide any accurate representation of any private and confidential communication that I may have had with Ms. Morgan.”

Siegrist said that those that have been critical of her work, or that of Dr. Huizenga’s, have “latched onto these poisoned-pen letters,” and this was a “manufactured attack.”

She also blamed the text messages for promoting an agenda to remove Dr. Huizenga from her position.

“It should be clear to all, that in this digital era, anyone can send any kind of information that they desire,” said Siegrist. “Whether true, half true or blatant lies about anyone, far and wide with only few key strokes.”

As the public audience shifted in their seats, Siegrist called the “Milford Citizen,” a coward.

“I have no intention of giving these poisoned-pen letters any credibility by even attempting to defend myself against these half-truths,” she said. “This was simply an attempt to defame my character.”

Siegrist said until the unrevealed source came forward and until Jamie Morgan provided a complete and accurate, “carrier verified transcript of every text between us,” she would consider the matter closed.

Hannon also received rousing applause and cheers from the audience, as he said that, “It doesn’t sound like your taking any ownership of any of the conversation.”

Siegrist’s reply, “I’ll let my statement speak for itself,” earned audible groans from the crowd.

Tlapa then asked, “Are there any specific text messages that were shared with us, that were factual?”

Siegrist deferred to her read statement.

“In my opinion,” Tlapa shot back, “You crossed numerous, ethical guidelines, you not only discussed myself negatively, you discussed several employees who shall remain unnamed. You shared private information that you should not have access to, to begin with. It wasn’t an isolated event; it was a pattern of behavior that dates back for months.”

Tlapa spoke about board member guidelines, adding, “You’ve broken every bound of that guide.”

That sparked yet more applause from the crowd, as Siegrist sat and stared stoically.

“How can any employee of this district, trust that any confidential information that passes your fingertips or your lips, is not going to be shared with the greater public?” asked Tlapa. “Would you care to comment?”

Siegrist once again referenced her statement, to more moans, and awkward laughter.

Board member Kevin Drew seemingly defended Siegrist, saying that “there were discussions that involved employees. But I didn’t find anything in there necessarily that might have been information obtained as a result of being a school board member.”

He called sections of the text messages, “troubling,” but went on to say, “to me, what I was reading was an account that happens every day between to colleagues commiserating. I didn’t see anything in there that was divulged that only you would know about it. I would temper it with that.”

Tlapa, reading from board bylaws, said, in part, “Without limiting other causes for such a dismissal, it shall be considered a violation of a town officer’s oath, for the officer to divulge to the public, any information which that officer learned by virtue of their official position. Furthermore, the divulgence of such information would constitute an invasion of privacy.”

“Your words are deplorable to me and it makes me embarrassed to be a member on a board on which you sit,” Tlapa said, drawing raucous cheers and clapping.

After more tense and heated moments, the board presented a vote – led by Tlapa – who motioned for the dismissal of Siegrist from the board.

Harvell clarified, by saying that the board does not have authority to remove an elected board member.

“Do we have the right to ask that Jenni Siegrist respectfully resign?” asked Hannon through a crescendo of applause.

“I think basing all of this on a piece of unverified information, demanding that I apologize for something that has no legitimacy, that I have not said… until such time as ‘Milford Citizen,’ would lie to come forward, or until such time that Ms. Morgan produces a carrier-verified transcript, then I would be more than happy to address any specific you’d like to address.”

Tlapa provided a motion to remove Siegrist through whatever channel is permissible, in this case, removal proceedings.

“Do the right thing Kevin,” said one audience member.

“I can’t vote for this,” Drew said. “The reason is because the bulk of this discussion is an unflattering conversation between two people. Ms. Siegrist never thought it would become public.”

Carvell also provided the second nay vote. A tie results in the nay vote. But not before Tlapa asked Siegrist, if the cell phone number on the document belonged to her.

“I’d rather not comment,” said Siegrist, to a stupefied crowd.

Moving on, the board dealt with other matters on the docket – meeting dates, attrition rates, staff departure and policies – to name four – before audience members lined up to speak publicly. Those parties included parents, teachers, voters and tax payers.

“I am utterly disgusted with what happened here tonight,” said Steve Vetack of Milford. “It seems that every time this board has been challenged, you similarly dismiss any challenge. Now apparently the discussion of these comments by members of the board, are being similarly dismissed simply because they were on a spread sheet.”

Vetack reminded the board of their obligation to investigate the matter.

“Denying that an investigation should move forward is not the way to do it,” he added. “I would suggest that since it’s clear to me that this board has a serious problem with ethics- that policies going forward, that members of the public be in on this discussion, to determine what these ethics should be and how they should be carried out, and what penalties if any should be enforced with unethical behavior on the board. With no disrespect, I’m a voter. You work for me.”

Surprise attendee Jamie Morgan stunned the audience, when she presented her phone to Tlapa, who said, in essence, that her text messages with Siegrist seemed authentic.

“This whole thing is like a bad divorce,” said Morgan. “This is a derailment. We’re too good for this.”

Morgan also acknowledge that she has called the state department of New Hampshire, escalating the investigation into the text message fiasco.

Although, the earlier board vote could not be revisited, Tlapa asked that the board reconsider making a motion to request that Siegrist “do the right thing and resign.”

And after some back and forth between Tlapa, trying to determine what motion she could file.

Carvell seemingly played a game of semantics with Tlapa, when trying to explain the board’s case for action.

“You tell me, Ron,” said Tlapa. “You’ve been doing this for how many years? I think you can probably direct me, knowing what my intention is as to what motion to make.”

“I’ve already told you twice,” Carvell snapped, to another round of groans from the public audience.

Ultimately, Carvell asked, “Do I have a second motion to reconsider the previous motion?”

To the surprise of everyone in the room, Tlapa and Hannon were joined in their affirmative vote by Drew and by Carvell.

Lastly, it was Diane deHaan, a mother and grandmother in Milford, who scolded Carvell for not looking at her when she spoke and asked Siegrist to do the right thing.

“You can turn the air off. You can make me hot. But you can’t make me leave early,” she said.

George Pelletier may be reached at gpelletier@nashuatelegraph.com.