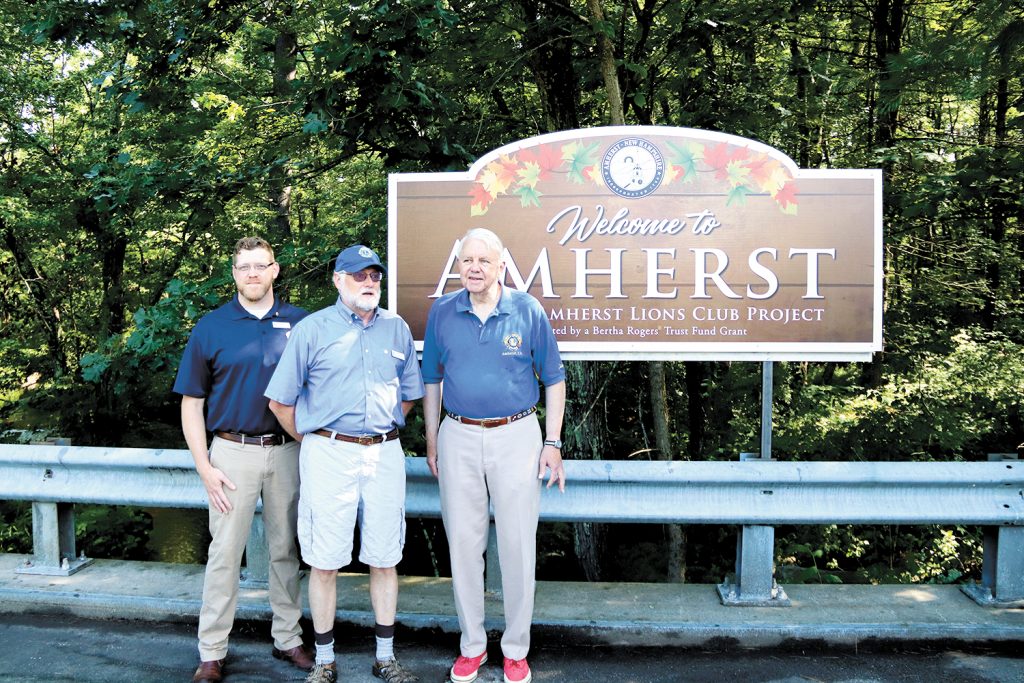 The Amherst Lions Club unveiled its latest project on July 13 – a closed bride that now features beautiful flowers, an irrigation system that uses water from the creek below to store and water the flowers and a new “Welcome to Amherst” sign.

The bridge is located at the corner of Boston Post Road and route 122 and is the result of many individuals and organizations who donated their materials and time in the design and construction of the concept. Those organizations include Novia, who designed and built the steel brackets for the plants, Speed Pro, who helped with the design and installation of the welcome sign, and members of the Board of Selectmen who approved trust funds for the start-up costs.

The Amherst Garden Club also played an important role in assisting with their expertise and donations of some perennials.

Ken Jones said the project started by driving down the neighboring road day after day.

“I would drive by and see this bridge just sitting there,” he said. “I’m talking years. And it was ugly. Trees were growing on it. And I finally said, ‘we’ve got to do something.'”

As the bridge was usable as a vehicle bridge, and it seemed fruitless to make it a pedestrian bridge, they decided to enhance the bridge and plant flowers instead.

“So, I drew up a sketch of what it would look like,” he said. “As my background is engineering, I went under the bridge to check the structure, which was sound, so it seemed like there was no reason not to find a use for it.”

The closed bridge itself was built in 1900 and some of its structure are granite blocks from the old Hillsborough Jail that was torn down in 1893.

As a member, Jones went to the Lions club, adding, “I got much more cooperation than I ever dreamed. It was through the roof.”

Reed Flowers had the task of creating the irrigation system that would regularly water the plants.

“We did a lot of brainstorming as to how to do this,” he said. “It became evident early on that we didn’t know if we could muster the resources to show up every day with buckets of water. So, we started thinking about it, and did some research, and we got a solar panel, a car battery and a battery charger. And the system is designed to turn on at dawn to water the flowers.”

Shirley Flowers said the garden club advised on what types of flowers could survive in the shaded area.

“The garden club donated the perennials,” she said. “The irrigation system has worked out so well. It’s our first year, so it’s a work in progress. But we couldn’t be happier.”