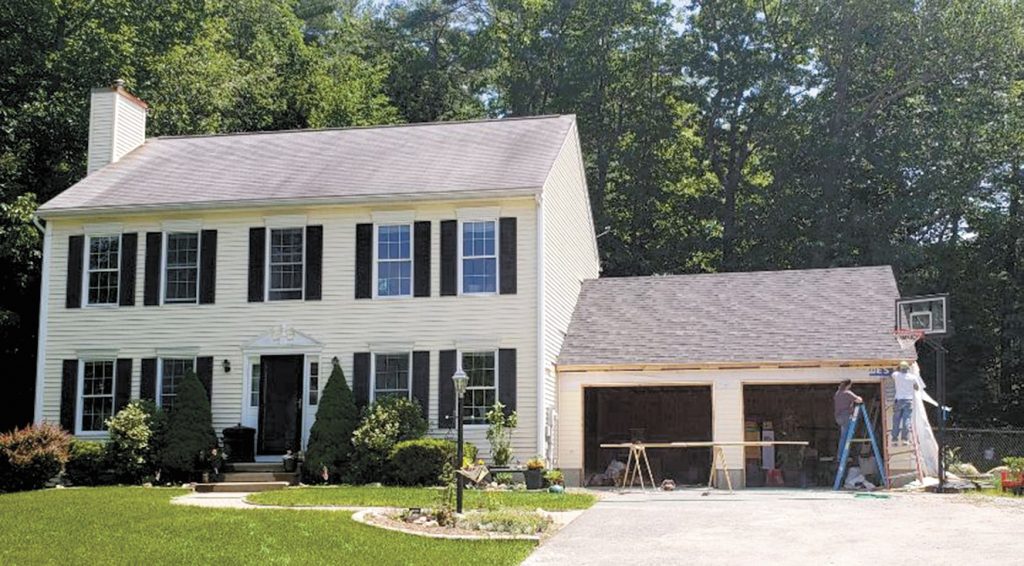 When Glyn and Ginny Reinders of Milford bought their new home in September 2019, all that was missing was a garage.

They chose Shawn Naylor, of Nailer Construction to do the job. And that’s where their troubles began.

“We paid $38,000 to Shawn over a period of time, and this included the deck and sliding glass door,” said Glyn Reinders. “Ginny and I got nervous when two guys that he subcontracted to do the work would come over about ten or eleven in the morning, and then leave by two or three in the afternoon.”

Donny Boyer (“a terrific guy,” said Glyn Reinders), came over to the excavation and ran into ledge- solid rock – that he had to rent another machine for,” Glyn Reinders. “It was a cost-over run that Shawn wanted me to pay, but it wasn’t in the contract. So that was an extra $3500 he wanted us to pay. And in the end, he stiffed Donny Boyer for that money. So, he not only cheated us, but he cheated Donny Boyer.” 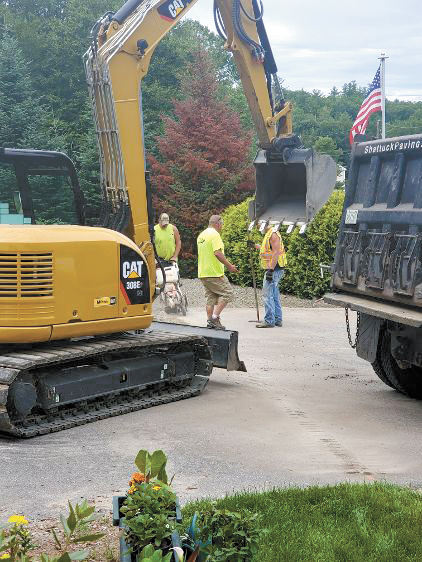 The Reinders suspect that Naylor took the money they gave him, and he used it to work on other projects.

“He was trying to shuffle a deck of cards and it collapsed on him,” said Glyn Reinders.

Glyn’s wife Ginny added, “He said, ‘I need my money up front. I’ve been stiffed so many times.’ So, we’re honest people, so we kept paying him and paying him.”

At this stage, work was getting done at a snail’s pace, said the Reinders.

“He was going to Florida and I wonder now if he was going to scope his new home,” said Ginny Reinders. “He said he needed $2,000 more for the door on the side and the two windows that we never ever got. So, Glyn being the kind hearted person that he is, okay, ‘I’ll give you the money, but I want to see the doors before you leave.'” 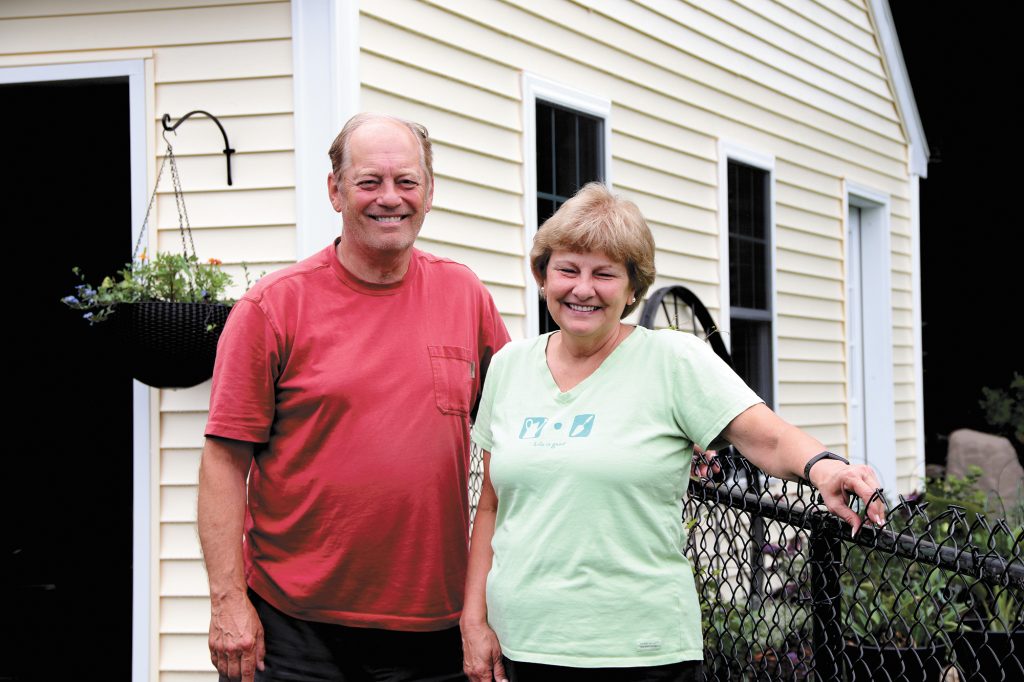 Initially, Naylor’s Home Advisor reviews seemed positive. But in the spring of 2019, with just the foundation work, and the walls and roof, things were at a standstill.

“He was a con man,” said Glyn Reinders. “We started battling about when he was coming. He always said he’d be here the next day. And then he started coming up with all these excuses- he had a serious illness, he went to the doctors, he was in a hospital for a week.”

Reinders kept meticulous documentation of his dealings with Naylor – from September ’18 right through spring of the new year and through today.

“When he left in October, nothing was cleaned up,” said Ginny Reinders. “We had piles of rocks, nails, debris. We have dogs. We finally hauled everything to do the dump when we had paid to have it removed and there was nothing from Shawn.”

At this point, Reinders asked Naylor a final time if they could work together to get the job done. The apparent answer was no.

“Finally, I called the New Hampshire Attorney General’s office and filed a complaint against Shawn,” said Glyn Reinders. “I did the same with the Consumer Protection Bureau and the Better Business Bureau. And Home Advisor. He had disassociated himself from Home Advisor.”

“He didn’t respond,” said Glyn Reinders. “He never responded to anything.”

Reinders would call Naylor numerous times each day, until, said Glyn Reinders, “he got tired of not answer the phone and would pick up.”

The couple began working on a lawsuit against Naylor but were financially strapped after paying Naylor the large sum of money.

Last month, the Reinders said his phone was now disconnected.

“We checked and there are two other active lawsuits against him,” said Glyn Reinders. “And I called the lawyer from the NH AG office and I told them that he left town.”

Through some recon by the Reinders, they discovered that Naylor bought a house in Port St. Lucie, Florida. Efforts, including a filing in small claims court, all have led to the Reinders not getting the job done and not getting their money back.

The Reinders were distressed and out a considerable amount of money but their luck was about the change.

“Winter had come and gone,” said Ginny Reinders. “And I asked Glyn to post something on the Badger Hills Estate Facebook page, saying how sorry we are for the mess that’s supposed to be our finished garage. Our contractor skipped town with our money.”

One day Ginny got a knock on the door by Joe Vaillancourt, a neighbor, who owned his own concrete company, and offered to pour the concrete for the garage floor, “in kind.”

“People like him give contractors a bad name,” Vaillancourt told Ginny Reinders. This brought her to tears.

Vaillancourt immediately took measurements and did the job. And then the Reinders received another knock on the door, this one from Todd Goodnow of TRG Contracting.

“I live three houses down,” said Goodnow. “I’m a contractor. Can you tell me what happened and show me around?”

Goodnow offered to put the windows and door in place and also do the siding, for free. And Donny Boyer came back, on his own accord, to finish the grading, landscaping and lawn. All pro bono.

With this momentum, Glyn Reinders wrote several letters, and made a few phone calls, including one to Carl Fimbel, who showed up at the Reinders’ home on a Sunday, to offer his help.

“He said we’ll take care of it,” Fimbel said. And with that, Fimbel donated his time and materials.

Next up at bat was Ron Shattuck, who called Home Advisor to get the lowdown on what had happened to the Reinders.

The Reinders were overwhelmed by the generosity of so many neighbors and strangers, all who became friends.

There were others: Brox Industries of Amherst donated the asphalt for the driveway; electrician Don Larabee offered his expertise with the wiring; and Chris Krol Excavating also lent a hand.

“We tallied what it would have cost us to finish the job,” said Glyn Reinders. “It was somewhere around $19,000.”

The Reinders have made some fast friends through this difficult ordeal.

“We told everyone that if by chance ever get a penny back from this guy, every penny is going back to these people,” said Ginny Reinders.

Glyn Reinders added, “They all said they don’t want the money back from us. They wanted to do it because they’re kind people. A couple of senior citizens needed help. So, the best we can do is pay it forward.”