‘PUMP’ UP THE VOLUME 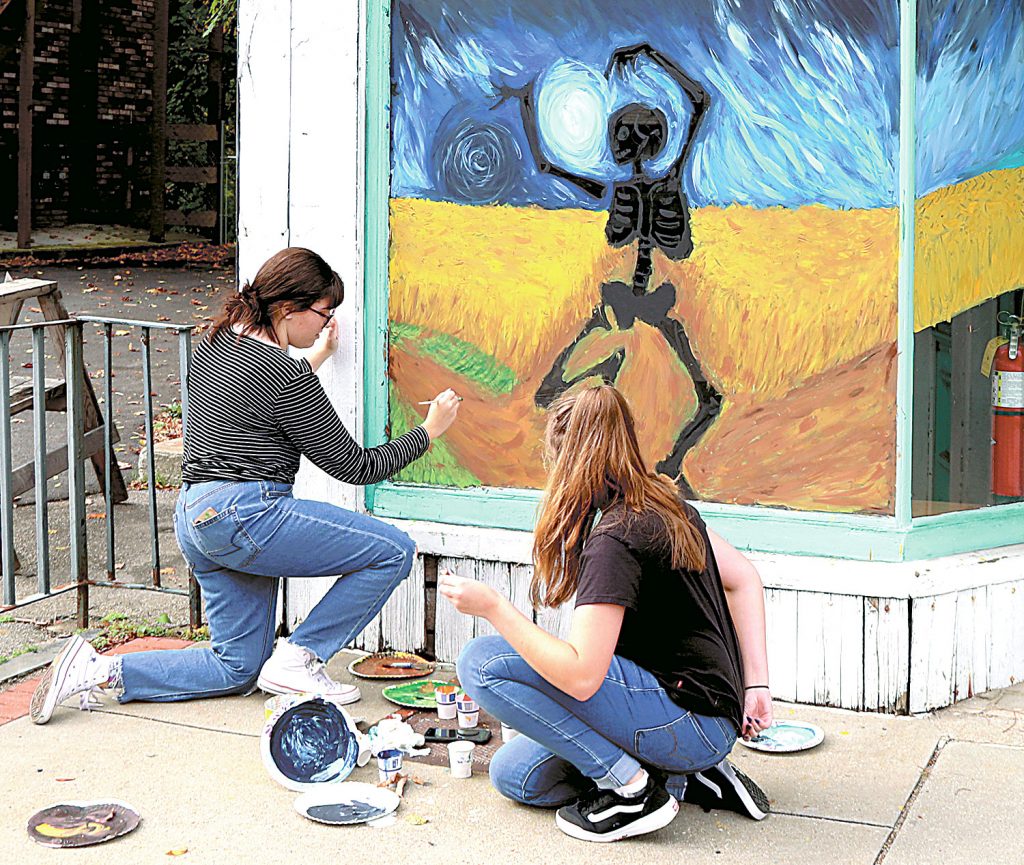 Students from Milford High School decorate businesses on the Oval in Milford with window preparation for this weekend’s 30th Milford Pumpkin Festival.

Tens of thousands of pumpkin peepers are expected to converge on Milford as the town celebrates its 30th annual pumpkin festival this Friday – Sunday, Oct. 11, 12, and 13.

The event will take place in downtown Milford on the oval, the community house lawn, Emerson Park, South and Middle Streets and the Milford Town Hall, as well as the Amato Family Performing Art Center on Mont Vernon Street, with visitors expected to come from the Souhegan Valley and Monadnock region, and Nashua and Manchester areas, as well as folks from Boston and greater New England.

Droves of volunteers have been feverishly working to put the finishing touches on the three-day fall festival, which features over two dozen musical acts on three stages, fun activities for the whole family, and over one hundred craft and food vendors.

Signature events include the great pumpkin weigh-in, pumpkin and face painting (don’t confuse the two!), a pumpkin catapult, arts and crafts, as well as scarecrow making, the Masons’ Haunted Trail, a talent show on Saturday night at the Amato Center, a magic show on Saturday at 2 p.m., and the special Halloween stamp ceremony during Friday evening’s kick-off at 5 p.m. at Emerson Park.

Granite Town Festivities Committee president Wade Campbell and vice president Zoe Lantaff have been busy coordinating and finalizing every last detail and noted that all monies raised by the Granite town festivities committee during the Milford pumpkin festival are re-invested directly back into the community.

Janet Langdell, president of the Milford Rotary Club, described the event as, “so important.”

“When MIT and Chamber were unable to continue managing the entire event, and GTFC stepped up, the first thing we asked is how can we help?” said Langdell, speaking of the Rotary and Lions’ organizations. “We thought that by helping them manage all the activities on the community house lawn, that would really help them out their first year. And we’re pleased again to have that opportunity. It’s been a wonderful collaboration and great fun.”

She went on to say “it really gets down to that sense of community, and collaboration and volunteerism. And hopefully that will shine, too. Plus, we have the ‘Citizen of the Year,’ and that’s happening during opening ceremonies.”

“Plus, the Rotarians, Lions Club, and Masons, just to name three, have been incredible,” added Lantaff. “There are so many vendors and non-profits participating. The Masons’ ‘Haunted Trail,’ is always a crowd pleaser.”

Fletcher Hargroves, part of the “Gourd Guard,” a group of fellow Masons who sit on the oval during the festival to protect the great pumpkin arsenal.

“We’ve been doing this for something like ten or fifteen years,” he said. “We guard those pumpkins, so nobody damages them. Plus, there’s the ‘Haunted Trail.’ It took us four hours just to get the tarps up so they can be decorated and lighted. It’s a traditional, and it’s fun for everyone.”

Campbell and Lantaff said an event of this magnitude couldn’t happen without the support of the town staff.

“There are so many people involved,” said Campbell. “The Department of Public Works, the fire and police, plus the EMS and ambulance services and town employees are all incredibly supportive.”

Lantaff said there were so many people behind the scenes, who worked very hard on different projects.

“Kani Nicodemus, our volunteer coordinator, has been very resourceful in finding volunteers to actually help during the weekend of the pumpkin festival,” she said. “And since we have a third stage this year, we’ve had some people who have instrumental in helping me to book musical acts. Henry More, of More Sound, he is the sound systems person, and is doing all sound at all the venues for the fest. And Katherine Schimke from Hippy Hollow Recordings has been instrumental as well.”

For those attending Friday night, officials suggest arriving there by 4 p.m., as some local roads will close at 5 p.m. Route 13 will remain open, with police directing traffic; Amherst Street will also remain open.

There will be free parking and free bus service from the Milford Middle School parking lot, beginning at 4:15 p.m. (until 9:30 p.m.), on Friday as well.

There will also be handicap parking on Nashua Street.

The Milford Historical society will be offering walking tours throughout the festival.