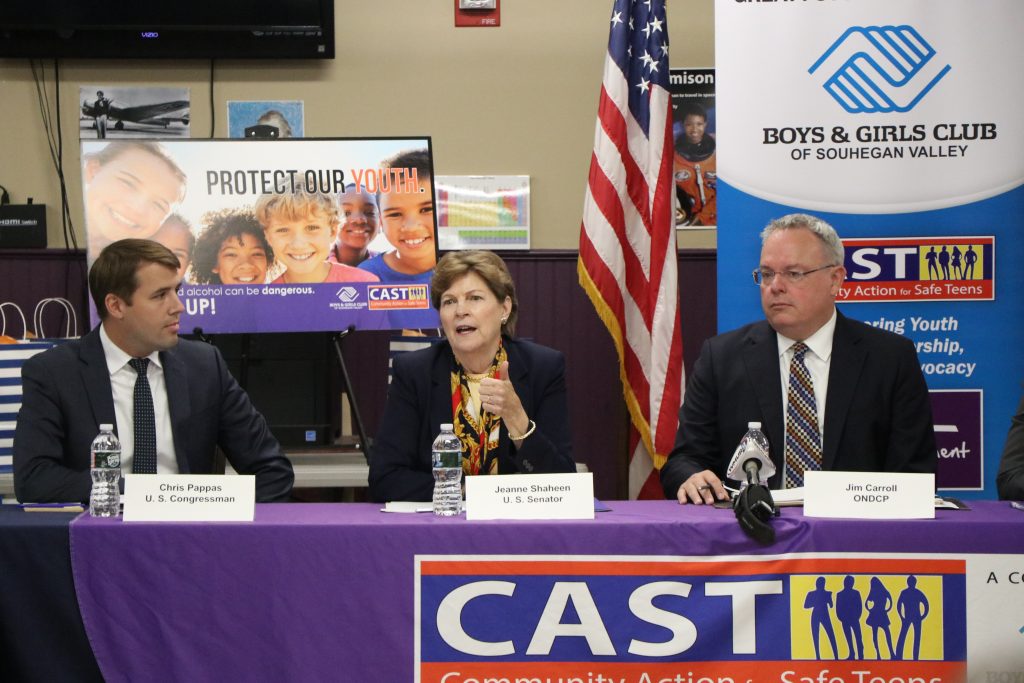 MILFORD – As people in New Hampshire continue to suffer or die from fentanyl, heroin and other opioids, members of Congress representing the Granite State are working to address the epidemic from multiple angles.

“We know in New Hampshire that the opioid and other drug epidemics (and) substance misuse epidemic impacts people from all walks of life. We know it impacts people at all stages of life and it’s changing the day-to-day lives of many, many Granite Staters,” Hassan said.

Hassan said she is grateful for the inter-silo approach that is being taken when addressing this issue. This means she believes all interested parties must work in cooperation to fight the problem.

“There are no silos in this crisis and we’ve got to do everything we can to keep moving forward. We have done some good work in getting resources to the state from the federal government. I’m proud to have worked on that effort with all of my colleagues up here, but we need more resources and there’s more work to do,” Hassan said.

When tackling the crisis, Kuster said it takes a “community approach.”

“Just getting people involved, I think, is a really big step forward,” Kuster said, adding this is, “not a 28-day, one-and-done type operation.”

“You’ve got a strong team here working together; we’ve got your back,” Kuster told discussion participants.

Shaheen and Hassan have cosponsored recent legislation titled, Turn the Tide Act, which will provide resources for New Hampshire residents struggling with substance abuse disorder. The Turn the Tide Act would provide $63 billion in funding during 10 years to bolster prevention programs and address workforce challenges in treatment fields.

Kuster has brought the Turn the Tide Act to the House and is serving as its sponsor.

Pappas on Monday said he believes the best effort to be made is ensuring people don’t get addicted in the first place, and doing that by “ensuring that we focus on prevention, giving people the tools at a young age to understand the dangers that exist of things from marijuana usage, to smoking to vaping to opioids and all the other substances that unfortunately are all too present in our communities.”

“We all understand that we’re impacted in our own homes, our own communities and our own businesses, and that if we’re going to fully confront this and ensure that we can allow people to live healthy and full lives, we’ve got to be doing it all together,” Pappas said.

Carroll believes more money is needed for the opioid battle.

“If we’re going to save more lives, which is what all of us care about so much, it is going to be an investment,” Carroll said.

For Carroll, the rippling effects of substance use disorder is something he knows all too well.

“I’m in this fight for a very simple reason: I have a person recovering in my family,” Carroll said.

Milford Welfare Department Director Susan Drew, who is also an active member of Community Action for Safe Teens (CAST), said while it is easy to get into silos when dealing with an issue such as substance abuse, CAST is working to incorporate those from all walks of life. CAST works to prevent substance abuse and promote healthy choices for youth throughout Souhegan Valley. It consists of first responders, representatives from several churches and representatives from the Boys and Girls Club.

Club Board President Helen Leach said, “The club and the community recognize the need for a program such as CAST. We supported this by taking on the responsibility of fiscal agent with the funding. Since that funding has come in, it has greatly impacted our ability to broaden our outreach into the community.”

“We have educators here; we have police officers; we have firefighters – first responders. That’s what it’s all about,” Fallon said.

“Because of the DFC grant, this has given us the opportunity to become that go-to organization in Nashua that now Mayor (Jim) Donchess, our local mayor, and many of our representatives will come to us and ask for information,” Valuk said.

After the discussion, Shaheen said, “The Drug-Free Communities program does a tremendous job helping local organizations and youth advocates with the resources they need to prevent substance misuse among young people in New Hampshire. As this discussion today demonstrated, the effort to inform future generations of the dangers of drug and alcohol use is a team effort.”

Grace Pecci may be reached at 594-1243, or at gpecci@nashuatelegraph.com.