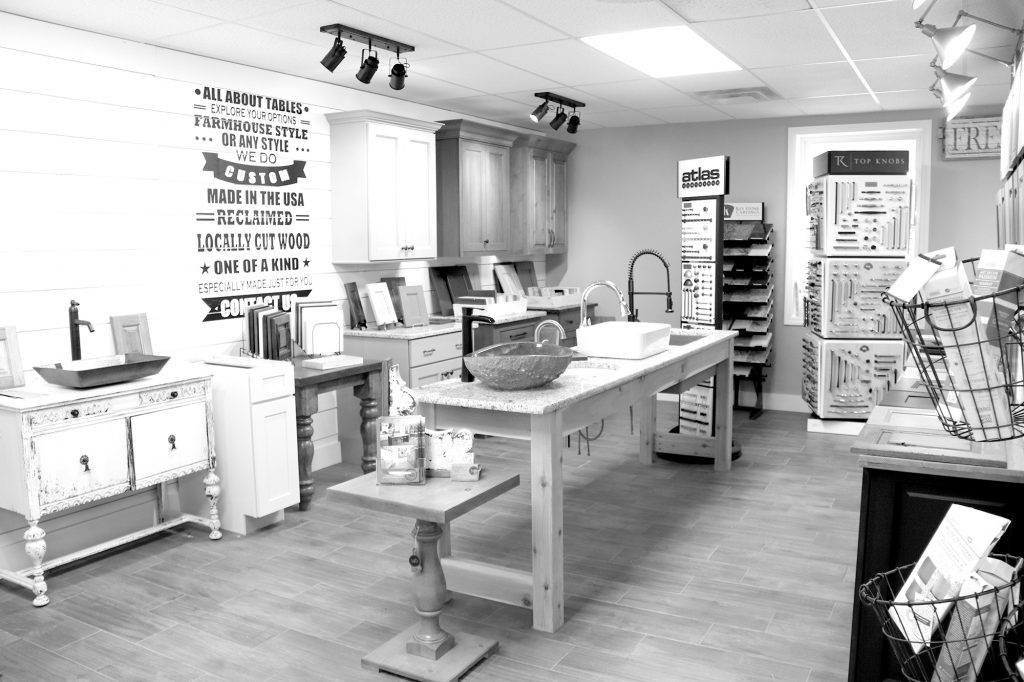 For furniture builder and designer Ray Holman, creating just the right space, along with his wife Lynn, takes a little ingenuity and just the right materials.

As part of the space at Robin’s Egg in Amherst, the Holmans found the right home for their designer kitchen business alongside Robin’s Egg owner Robin Dewey.

Holman said he had been talking to his wife about the concept of a showroom for years.

“I kept asking her, ‘When do you think we can do this?'” he said. “It was a financial thing because it’s a lot of money to open a showroom. So, when Robin’s Egg was moving, I asked if there was any space in the new shop for a showroom and it just so happened that the other side of the building available and we talked through it, and I was able open my own showroom right there in Robin’s Egg.”

It’s been a win-win for both Dewey and the Holman’s, who have all won awards for their work.

“We’re the only kitchen showroom that’s incorporated into a home design furniture store- that’s what makes us different from everyone else,” said Ray Holman. “I don’t want to be considered just a kitchen showroom. We can go in there and sit at a table and chairs and talk to people, and folks find that homey and inviting.”

Holman said that some days he goes into the showroom, “and there will be people just sitting there having a cup of coffee and talking at a dining table that I made. That’s what I like to see.”

He said it’s not so much a showroom as it is a place for people to sit, and relax and talk about what they’d like their kitchen at home to look like.

“People often say they really enjoyed being in our kitchen, they say it felt like home and they would like to work with us,” he said. “I don’t want to be one of those glam kitchen places. We’re more of a ‘ma and pa’ kitchen companies where you actually use your kitchen. We want to create a comfortable kitchen environment and make it beautiful while we’re at it.”

Ray Holman said there is a lot of handholding between Novi Antik and its customers.

“We’re there, communicating with our customers, from start to finish,” he said. “We design everything, and we’re not stuck in our ways. This is about creating the kitchen that you envision. It’s not the same for everybody. We try to help people out by designing their dream. We want people to get what they want from their kitchen. We’re not interested in just taking someone’s money. That’s not me.”

Holman said he typically just gets a phone call from a prospective client who tell him what kind of elements they want to incorporate into their space.

“That’s it, pretty much,” he explained. “I get emails and phone calls all the time. They give me the dimensions of their room, and I’ll go out to their house and take a look at the space. I want to make sure the furniture they want will fit the space properly. The last thing we want to do is build a piece of furniture that doesn’t fit their room.”

Often, the people will send Holman pictures of what they’d like him to create.

“I can pretty much make anything given a picture,” he said.

Holman added that there is a huge distinction between repurposed wood and reclaimed wood.

“Reclaimed is fun but it’s a lot of work because you’re dealing with the elements that made it that way,” he said. “I do a lot of repurposed furniture. I’ll take a piece of furniture that’s been thrown out in a dumpster and bring it back to life. With reclaimed wood, it has to be the right person to like it. It comes with a lot of variations in color but sometimes it takes brand new lumber to make a great table. I use local grown materials from New Hampshire.”

“And we don’t just sell kitchens,” he continued. “I’ve made hutches for people for a dining room off the kitchen; I’ve done custom-made islands. We might create furniture or fixtures to go with cabinets that they’ve already selected.”

“I try to always incorporate furniture that I’ve done for their kitchen or dining room, or even bathrooms with custom vanities,” he said.

So does he ever get thrown a curve ball?

“I get curve balls every day,” he said. “Every day is a new day when it comes to kitchens and bathrooms. You can go in and look and then there are instances where you have to go a different way. So, we sit down with them and go over the options. We always keep our customers in the loop.”