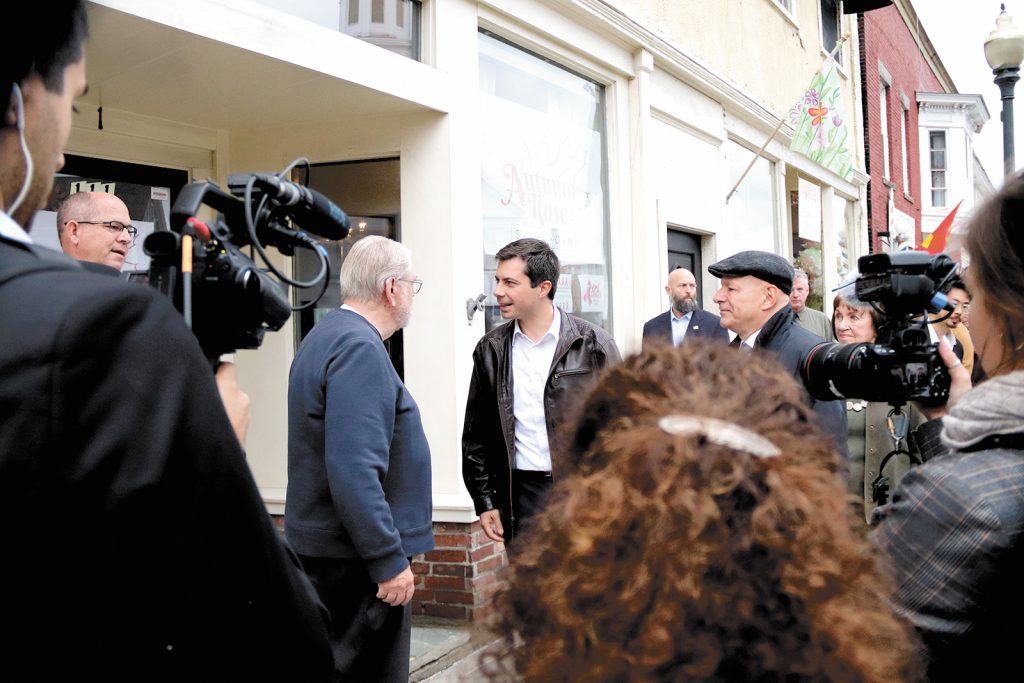 Just hours after becoming the first major candidate to pay the $1,000 fee to file to have his name placed on the ballot for the presidential election, South Bend, Indiana Mayor Pete Buttigieg took a walking tour of Milford on Oct. 30.

Buttigieg was flanked by state representatives Peter Petrigno and Paul Dargie and was followed by a corps of reporters, photographers and supporters as he made his way around the Milford oval.

After making stops at the Red Arrow Diner and J.M. Princewell, he stopped to speak with students and spectators, before heading over to the newly opened CoWorking House on Nashua Street.

Asked how the experience of filing earlier that day was, Buttigieg grinned, saying, “Great, it felt good. There were a ton of people there – really good energy.

There’s something about literally getting it in black and white, even though we’ve been at it for months. It feels very – civic.”

The 2020 hopeful chatted with people at “COHO,” as it’s known, before taking one question from the crowd.

“Just staying on the theme of small business, I’m looking for a democrat who isn’t going to roll back those tax cuts,” said one individual. “Because a 37% corporate tax rate – that was money that I was saving for my employees in case we hit hard times – and the trade barriers nearly drove us to bankruptcy. Trump was supposed to be good for small businesses. He’s been disastrous. I’m looking for a moderate democrat who is for small businesses, low taxes and free trade. Are you that candidate?”

“I might be,” said Buttigieg. “I can’t commit to not rolling back the Trump tax cuts because the explosion of the deficit is a huge problem.”

Buttigieg talked about the trillion-dollar shortfall and said there was room to rebalance effective tax rates.

“You paid more dollars in federal income taxes last year than Amazon,” said Buttigieg. “They have resources, no matter what the sticker rate is to get out of it. A lot of it is in the loopholes there.”

The 37-year old mayor talked about South Bend and the downside of trade in the industrial Midwest.

“To me the answer is not to shut off trade,” he continued. “Or not what they do now with these trade wars – they poke them in the eye. The answer is to make sure that trade is set up in a way that works for American workers.”

“I don’t know if free trade is the best way to express what I’m for,” said Buttigieg. “But I’m definitely not for closing off the rest of the world or any of the moves that this administration is doing because those are killing us, too. Consumers, businesses, farmers, are paying the consequences of these tariffs.”

Buttigieg called it a matter of brass tacks.

“Look, a tariff is a tax,” he said. “Nobody wants to say that, but it’s another word for a kind of tax. To me a balanced approach makes more sense.”

Earlier in the day, Buttigieg said the reason he’s drawn to New Hampshire is that, “there is a very independent turn on mind here.”

In closing, Buttigieg said he enjoyed “taking the grand tour of Milford,” adding, “we’ll see you on the trail.”