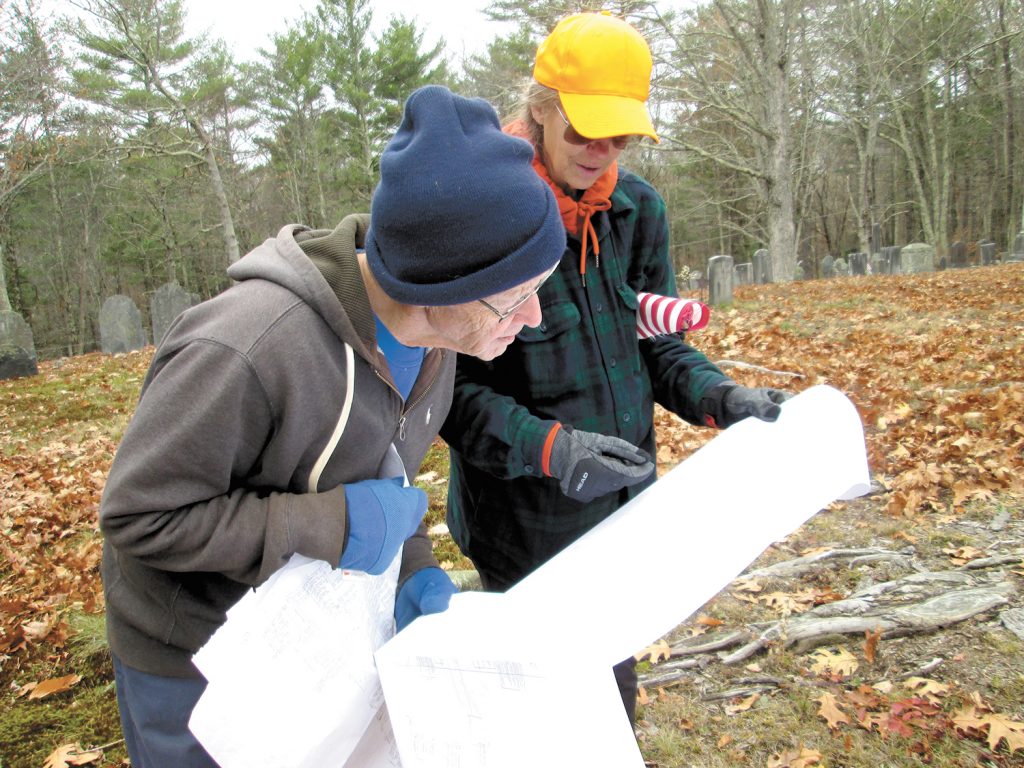 LYNDEBOROUGH – Over the past several years, Cemetery Trustee Ginny Chrisenton has been compiling a data base of the town’s eight cemeteries. Part of that effort has been trying to locate the unmarked graves of known veterans so they can be decorated with flags on Memorial Day. Cross-referencing military and mortuary records, the Lafayette Artillery “List of soldiers graves in town we decorate,” and an 1816 cemetery map, she has identified the graves of six veterans.

On Veterans’ Day, she and fellow trustee Larry Cassidy walked to top of the hill in the South Cemetery to point out the three buried there. A plan is being prepared to provide markers for these veterans.

The top of the hill is mostly bare of headstones. The ground between the huge stumps of the pine trees that date to before the cemetery was established, is covered with low bush blueberries and other native vegetation. There is no lawn grass up here. When the cemetery’s first half-acre was established is not known but it was well before 1800. The town’s first settlers arrived in 1736.

It is presumed that the graves originally had wooden markers since slate was not readily available until after 1800.

A fragile map from 1816 shows over 170 people buried here in Section Two, but only about 30 have markers. Using a nearby headstone as a reference, she pinpointed the grave of Captain Jonathan Stephenson, a very early settler of the town and a veteran of the French and Indian War (1754 – 1763).

The date of his death is unknown. According to the town history of 1905, Stephenson arrived in what was then named Salem-Canada about 1740.He was commissioned a captain in the 10th company of the 6th regiment of Militia in 1764. The commission was signed by Gov. Benning Wentworth. Most of the family records were lost in a housefire.

When the charter of the Town of Lyndeborough was granted in 1764, Stephenson was chosen town clerk, the first person to hold that office.

Also in the South Cemetery, not far from Stephenson’s grave, are those of Jeremiah Abbott and Captain William Blaney who fought in the Revolutionary War.

Oliver Stiles, the only known veteran of the War of 1812, plus an unknown veteran, are in the Center Cemetery.

There are three other veterans of the Revolution who will be honored with markers: John H. Gage in the North Cemetery, and James and Andrew Thompson in the Route 31, or West Cemetery.

The style of the gravestones is still being debated. In some cases, several names may be placed on one stone.

Chrisenton said placing a monument to the Revolutionary War veterans near the Soldiers’ Monument, which is for the Civil War, has been considered.

There are also many other residents in unmarked graves and doing something for them is being discussed with members of the Heritage Commission, perhaps creating family markers.

During a discussion at a recent selectmen’s meeting the general feeling was “everyone deserves a marker.”

That is a very expensive long-range plan.