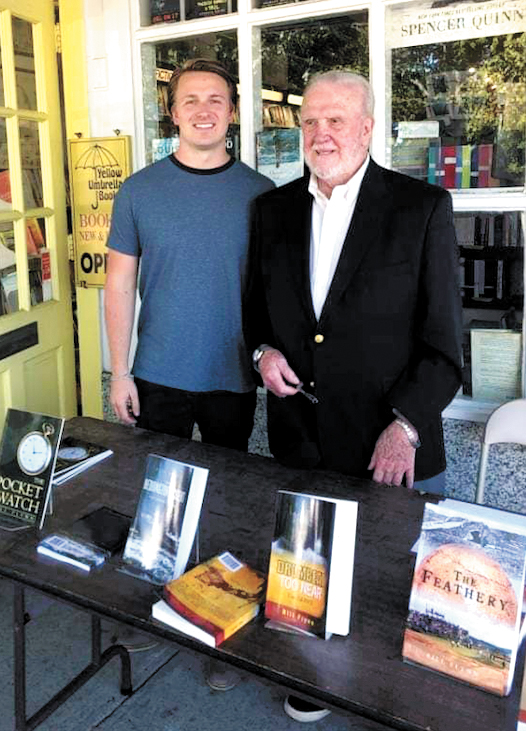 Flynn, an Airforce veteran who lives in Nashua, is the author of several books which include “The Feathery,” “A Drumbeat Too Near”, “The Beddington Incident,” and “The Pocket Watch.”

The author said he draws upon his world travels while in the Air Force and while working as an engineer for Raytheon in Massachusetts.

“I played a lot of golf in Europe,” he said. “I visited a lot of courses, the British Opens and the Ryder Cups. As a result of that, I wrote ‘The Feathery.”

He said he’s currently re-working a book of his, “The Deadly Class Reunion.”

“I’m modernizing it,” Flynn said. “I’ve thrown in some DNA. A man, who was dropped off at an orphanage, tries to find his father. He finds out that he has a half-brother. It’s kind of a thriller.”

“They were probably the closest of any combat that came into America,” he said. “The title of the book, ‘A Drumbeat Too Near,’ was derived from ‘Operation Drumbeat,’ which was run by Admiral Donitz.”

The story centers around three children, Junie, Iggy and Allie, who patrol the beaches as volunteers during the war.

“I basically take a U-Boat commander and make him a good guy,” said Flynn.

We were pretty much were brainwashed that the Germans and the Japanese were terrible people during that time frame.”

In the book, Flynn wrote a parallel story line about the U-Boat commander, drawing this time on his stay in Paris.

“He had a girlfriend in Paris,” he said. “It was a little touch and go with that, because the Gestapo was watching him. They did not want him to be hanging around with a Parisian girl. And then it switches back to Cape Cod where the three kids were growing up and they actually confront saboteurs. In real life, there were seven or eight incidents of that happening during WWII.”

Flynn said that some of the fiction that he writes has a lot of truth to it.

“For example, in the ‘Beddington Incident,’ there is a Col. Pash, who is a real person, who took a bunch of scientists over to Europe and they followed the invasion in the second world war. And the reason they were there was to determine how much each country was doing on nuclear bombs. That was the true part of the book.”

Flynn said he developed his passion for penning books after doing a fair amount of technical writing.

“And then the word processor came along,” he sighed. “That made it a lot easier to do a lot of writing. And I think some very good books are written by independent writers. They don’t make it into the mainstream, because there are too many.”

He added that he took a few courses in English and in writing but it was his many travels that stimulated his craft.

“It really goes back to my ten years in Europe,” Flynn said. “And I am really familiar with Cape Cod because my relatives are down there. I know the atmosphere of Orleans and Chatham. In fact, I did a book signing there are the Yellow Umbrella bookstore.”

As for fiction versus non-fiction, Flynn said he tries to blend the two.

“I do a lot of research on the non-fiction side and sort of put them together,” he said. “There’s actually a true story about a woman in Maine, who was coming home from a bingo game. She saw these men walking along the road in long leather coats, carrying briefcases. It was in the dead of winter. She said she saw a lot of weird things with tourists in the summertime, but this was too weird. So, she called the chief of police.”

As it turned out, the men were German spies.

“They launched off the coast of Cape Cod,” Flynn said. “So, I write a little about that in ‘Drumbeat.'”

“And when I do a particular scene, say, if they’re eating in a restaurant. I figure, maybe the reader is getting hungry. So, I put recipes in the appendix,” he said with a laugh.

It’s true. In the back of “A Drumbeat Too Near,” Flynn lists recipes for menu items like ‘Hush Puppies,’ ‘Mrs.’ Lees Creamy Grits,’ and ‘Barbara’s recipe for Weiner Schnitzel.’