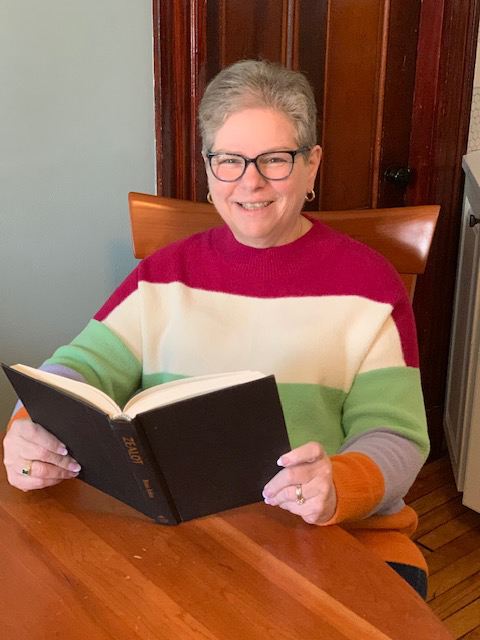 MILFORD – For Judith Zaino, the exasperation of watching the sometimes chaotic chain of events at a Milford School meeting, or hearing about what’s happened to a parent or an educator who hasn’t had a voice, or their message hasn’t been heard, has spurred on the former Milford educator, mother and grandmother, to do something about it.

She’s running for the Milford Board of Education.

“Honestly, it’s something that I’ve talked about on and off for about five years,” she said. “People who know me know that I’ve said that I wanted to run for the school board. I thought it was a good way to give back. I retired last year, but over the past couple of years I became more and more convinced that I needed to run for the school board. I feel that it’s a critical time.”

Zaino said the lack of stability and civility during some school board meeting has made her feel distressed.

“I think we need to change the tone of school board meetings,” she said. “I think we’ve had a lack of stability. And I think that lack of stability has led, and it’s tough to say what came first, but there’s been a breakdown in communication and then a breakdown in stability. So, we’ve gotten ourselves into a situation, where the stakeholders who care most about the school, the kids, their education, those folks are not communicating anymore. And that is really troubling. That’s not good for our kids.”

With a grandson attending Heron Pond, the former social studies teacher said there needs to be a new mindset.

“My first thought is that we need some different representation,” she shared. “And the most important thing anyone can do is vote. This is a representative board. The thing we need to focus on is that if people want something different, they need to vote for change.”

“People can say they want it to be different but they have to vote. Next month, if the people of Milford decided they didn’t want me on the board, and they like the position of the board, then the people have spoken. And they’ll say what’s happening is what we want to happen. In my opinion, we need change.”

In an election year, Zaino said the importance of people running is vital to sustain the bylaws of the board and its intent in the first place.

“I don’t know that the numbers are that different than they have been the past,” she said of the number of people possibly seeking a board member seat. “When I think about elections, and there are five people who care enough to run for public office – that’s important. That’s a positive thing. Whether with it be with members of the current board, and people are looking for change, I think anytime who you have a choice in candidates, that’s a good thing for the voters and the residents.”

She said she follows the board meetings but tends to watch them at home.

“I follow them pretty closely,” she continued. “I understand that there are folks in the audience who are frustrated and speak out during the meetings and that is not appropriate.”

Last week, there was a rumbling in and around the Milford oval about a warrant article that was submitted to the board but in a private session, the school board refused to include it on the ballot.

“I know as much as anybody who read the newspaper article about the warrant article,” Zaino said [Milford Cabinet Jan. TK]. “It does seem like another situation where there was a lack of transparency. And I will say that Pete Basiliere and Joan Dargie are both consummate professionals. I trust them both. Knowing that they’re both involved in looking at this and digging into it then I think they will find out exactly what was going on.”

It’s been observed that many residents, teachers, parents and taxpayers among them, want to express themselves but wish to remain anonymous for fear of retribution because they might have a child in the district and they don’t want there to be any repercussions.

“Yes, I agree with you,” she said. “Members of the board have been imperious and intimidating towards board members and people who attend meetings and make statements. I think there are people who are fearful of making public statements, they may fear for their children’s educations.”

“The greatest casualty of lack of transparency is that I have spoken with parents who are afraid of even speaking in favor of something the board did for fear that a teacher is going to feel badly about their child,” Zaino emphasized. “That is horrifying to me. That speaks to the issue about how people feel afraid and we shouldn’t be running a school district like this.”

Zaino said that people need to keep their jobs. ‘Talking out of turn’ doesn’t fair well to some.

“I’ve met people on the other side, employees of the school district, who won’t saying anything out loud for fear that their job may be compromised,” she said. “Not everyone in this district works under contract and some are fearful because of that. This is not just one side or the other. People feel like they can’t in effect, trust each other.”

Many agree that statements made by board of education attendees who stand at the podium, might have gone farther or sounded clearer had the audience not been jeering or heckling or groaning or snickering when certain members of the board are speaking. Or not, for that matter.

That defeats their best ideas. And their ideas get lost in translation because of attitude.

“It very much can,” Zaino answered. “If you read Robert’s Rule of Order, communication is penultimate. The control of the meeting is the most important thing so everybody’s opinion can be heard and heard fairly. At the base of it, everybody’s opinion gets recognized. Once people start going outside those lines in either direction, it starts to erode. It’s about civility.”

George Pelletier may be reached at gpelletier@nashuatelegraph.com