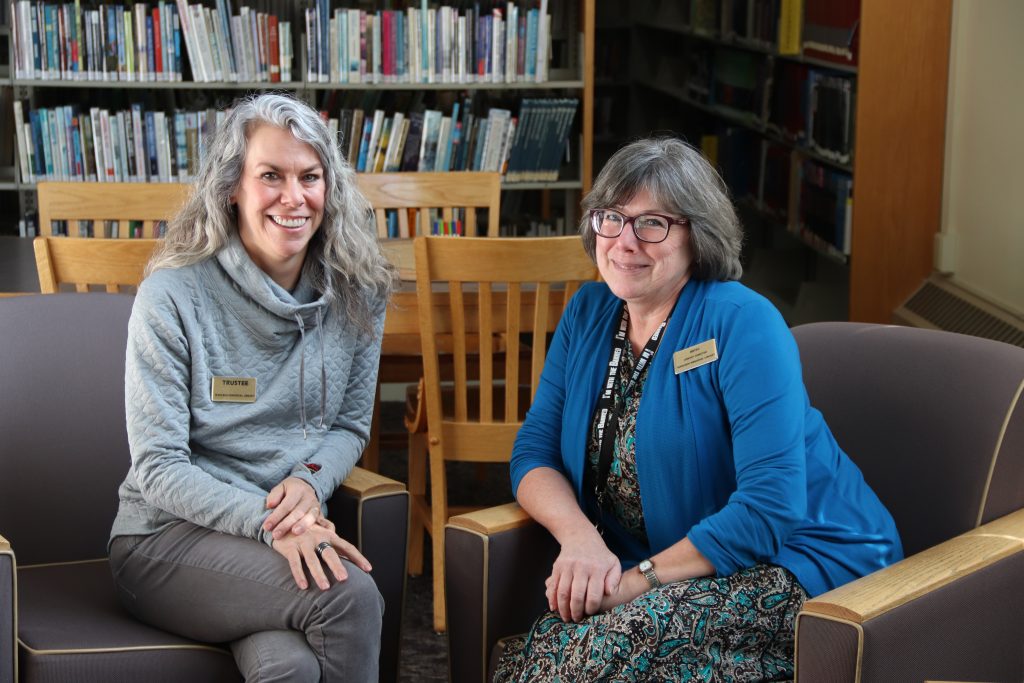 And on any given day, the building is bustling with people. For many, it’s part of their daily routine.

“We were joking the other day that we could probably exist here in town, even if we didn’t have books,” said library director Betsy Solon. “We’re offering services to the community as far as technology, helping people get online – believe it or not in this day and age – some people don’t have computers at home or they can’t afford internet And, we’ll be providing even more of that when the census comes out.”

Wadleigh is also due for a major “expanovasion,” meaning that it will be part expansion, part renovation. As for remaining in their location at 49 Main Street, just steps off the oval, Solon said that everyone agrees – being in the center of town is advantageous for the library and its visitors.

“The citizens, that we involved in the project from the onset, agreed,” she said. “We’re going to make the building more ‘flexible.’ The furniture, the walls, anything that we can do to make the interior flexible for the future if we have to move things around, we won’t have to tear another wall down. It will give us a teen area; right now, they sit on the floor or they go into the children’s room and there are these 16-year-old boys sitting in these tiny chairs.”

Other changes include a new entrance, an expanded computer lab, new lighting, better conference spaces, and a performance terrace.

Those changes will help the library as it also continues to update and streamline its many services. Currently, Wadleigh also provides notary services and U.S. passports.

And it’s a happens to be a great place for seniors to go.

“They come in a learn new skills,” said Solon. “Every Monday there is a movie program so they can see all the new releases without going out at night.”

“With that, residents are creating some pretty unique things,” said Solon. “We teach students how they can use it. We have some creative folks that are designing board games, and one woman who does physical therapy, has us make sets of all the bones in the hand. That way her students can put them together and see how the bones work.”

Wadleigh has offerings for children as well, including teaching parents how to read to their child, providing young ones with early literacy skills.

“With preschoolers, we have three or four programs a week,” said Solon. “We teach them even the simplest of skills, like how to hold a pencil or a crayon. They’re not learning that. Some of them are just shuffled off to school. And we stimulate imagination – like drawing a box and pretending it’s a castle. We’re trying to help with child development.”

“We don’t even check their I.D.s,” she added. “People don’t have to buy anything. They can sit here for five hours. We’re not going to kick them out. There aren’t a lot of places for teens or older people to go. We do have citizens experiencing homelessness in town. We are a place to get warm and get a cup of coffee – which is free.”

Solon said they are seeing a trend with people dealing with trauma – whether through mental health issues, or life situations.

“I see that in the future, my staff will need to be trained,” she said.

That’s quite a curveball, considering any traditional sense of a library. But Solon is undeterred and recognizes the role the library plays as a community center.

“That’s where our focus will be,” she said. “It’s almost like social work training.”

Solon recalled one citizen who had retired and lived in a rural area and was very depressed and despondent.

“The family was very concerned,” she said. “They found a senior living environment here in town, close to the library. And now that person is here every day and doing better. That person is now very social. And the family thanks us every day for welcoming them and making this a place that they can be around people.”

“It’s the one place where a person who makes a lot of money can sit and converse with a person who doesn’t have a lot of money,” Solon said. “They can talk about a movie or a current event and it might not be a conversation that they might have some other place.”

She said that the library is starting discussion groups, saying it’s “a safe place where we can respect everyone’s opinion.”

If that sounds like a lot to handle, Solon, along with library board of trustees president Kathryn Parenti, said that it can be. Much of what the Wadleigh does like many other libraries, has revolutionized that was people think about libraries.

“I think in New Hampshire, particularly, we have a good network,” said Solon. “There is a consortium with twelve libraries. We meet frequently and share ideas and tips and actually, some of the training sessions can be done together so we are consolidating our resources. It’s a real collaborative effort.”

Solon and Parenti agreed that outside the walls of the library, people think there a world of material online; why do we need libraries?

“They don’t realize that people are social beings,” Solon said. “We try to greet everyone by name when they come in. We might be the only person who acknowledges them, so they don’t feel isolated and hopefully don’t feel so lonely.”

In terms of budget, Solon said the trustees set a very reasonable budget.

“With the passport acceptance service, we have eight members trained,” she continued. “Because for every passport we process for the government, the library gets to keep $35. So, it’s given us some wiggle-room, so we can say, ‘yeah, let’s put this program together.’ But we’re trying to be careful, and responsible and transparent.”

Solon said if the library does an event or program that may be considered “controversial,” they do not use taxpayer dollars.

“For example, we did a discussion on racism,” she said. “We watched a DVD or streamed something. We also did something about gun control, speaking about both sides of that topic. That was not done with taxpayer money. And this month we’re doing something on the ‘Innocence Project,’ which helps inmates who might have been innocently convicted. I think that will be fascinating. We just want to educate.”