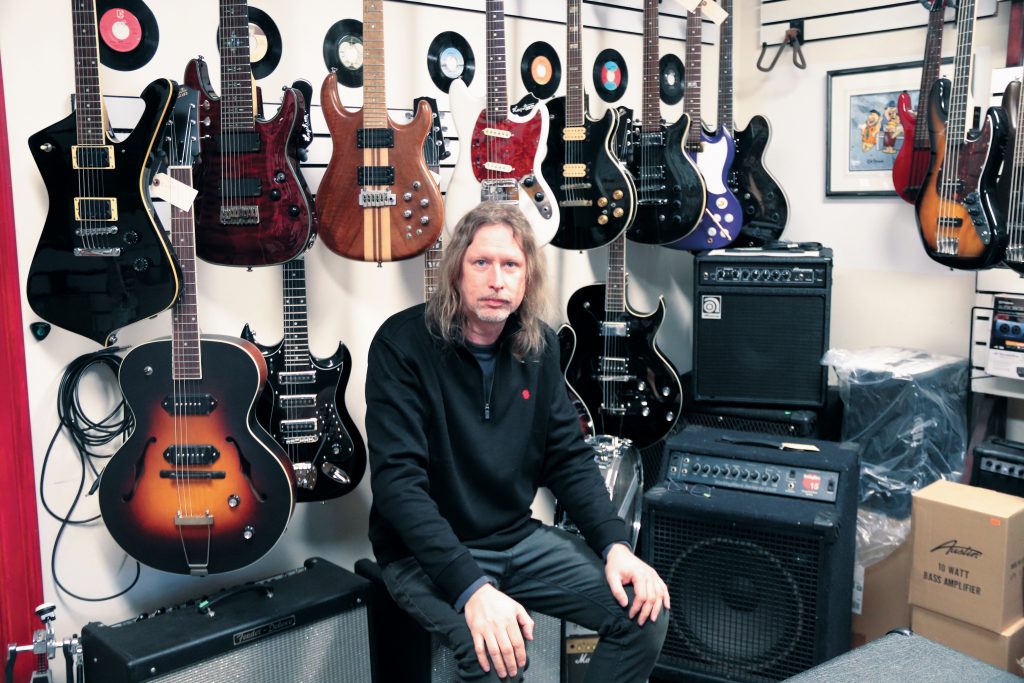 Owner Jeff Harrington said the store is celebrating its 14th year and trends in music lean towards music instruction.

“Most of the time, it’s music lessons that does draw a lot of folks in,” he said. “I’ve been a drum teacher here in Milford since 1995. Before 9-11, I had something like 41 students; and after 9-11 it dropped off significantly. The low-point was two days or about 10 students. It just got back to the point where I am at 33 students.”

Harrington said the reason for the decline had everything to do with the economy then and consumer confidence.

“What unfolded after that date just really hit the economy hard,” he said. “Things were really good before that. Things are just starting to get back and election years are always tough. I don’t know what’s going to happen this year but luckily, lessons are going well.”

Harrington said they shrank their square footage last year for a couple of reasons.

“There is the same amount of equipment and gear in here,” he said. “Our inventory is over $150,000 in here. And when I looked at 2019, Thanksgiving was a week later which only left three weeks for people to get their Christmas stuff. Online is huge — which is terrible for stores. And then we got whacked with a huge snowstorm at the beginning of December, and that took two days. And yet another storm two weeks later.”

Harrington couldn’t have predicted the weather, but he said, “that almost killed Christmas.”

“I knew that Christmas sales would be lower,” he shared. “And then this year, every election year retail goes down. That’s the way it’s been since the beginning of time. So, I knew there would be two tough years in a row.

Harrington isn’t quite sure what it is about election years that jinx sales.

“I’m a drummer,” he said. “I have a music degree in education and performance. But I’m definitely not a business major. I talk to a lot of other stores, and from what I have seen in the last few years, people are holding onto their money. They’re afraid — it’s a doomsday theory every time. People are a little tighter. I don’t know if that effects that stock market, but I think people are more guarded that way.”

As for the climate for music in Milford, Harrington has high praise for the town and sees things moving in the right direction with new businesses and people traffic.

“I do,” he said. “We see new people all the time. When you have 4th graders playing instruments, and then they play, and then they stop, so people come and go every few years. A 9th grader might play for a while, and then they go off to college and you don’t see them anymore.”

Harrington said he’s added another instructor, to make that total an impressive ten. And he said that music and band in middle and high schools has some great music programs.

“For some reason though, we don’t see too much of the band kids,” he explained. “I think if someone needs a new mouthpiece, they get it online. And Milford high school started teaching lessons out of the school, which hurt us. We had an excellent trumpet teacher and flute teacher, and this happened seven or eight years ago. I’m not trying to bad mouth anybody, but when that happened, it did hurt some of our business.”

“The junior high teacher does,” he said.

To any skilled musician, trying the gear before you buy is part of the art of finding just the right guitar or even the right pair of drumsticks.

“That is definitely true for guitars and drums and things like that,” Harrington said. “With the school band program, it’s kind of a racket. I had actually started my own rental program but stopped it. With band instruments, it’s a total racket. If you have a brand-new flute, for example, which will cost you $1200. You have no choice but to rent it for $25 per month. And the problem is, the flute is actually only worth $300. Crazy.”

Harrington started his own program and where he was refurbishing nicer instruments.

“And we were selling them for $199, or $299 so if the kid stopped, they could probably almost get all their money back, for a flute or a saxophone or a trumpet. But what we found with that, is that we would end up returning so many instruments so we had to stop doing that.”

Harrington goes back to Milford, saying it’s great for lessons.

“It’s almost like a disease or something,” he said. “Everybody catches it — I mean that in a good way. I grew up in upstate New York near Utica, and in ’99, I moved back to work on a record and worked at Guitar Center. That was about a year. It wasn’t great — my feeling was that a good guitar teacher would have 40+ students. Their thinking was that number was closer to 20, which isn’t good at all.”

“This area in general has been excellent,” he said. “All the kids are learning and they keep coming back every week. That has been really special about Milford and Amherst and Hollis.”

And Harrington has big news: “We’re starting a by appointment high-end show room,” he announced. “Stuff that’s over $1,000. Drums, guitars, anything I can get my hands on. So the stuff in the showroom and store now will be up to $1,000 and more dedicated to the students that come through. And then if somebody wants to try out a really nice piece, I’ll make them a cup of coffee, they can come in and we can go from there.”