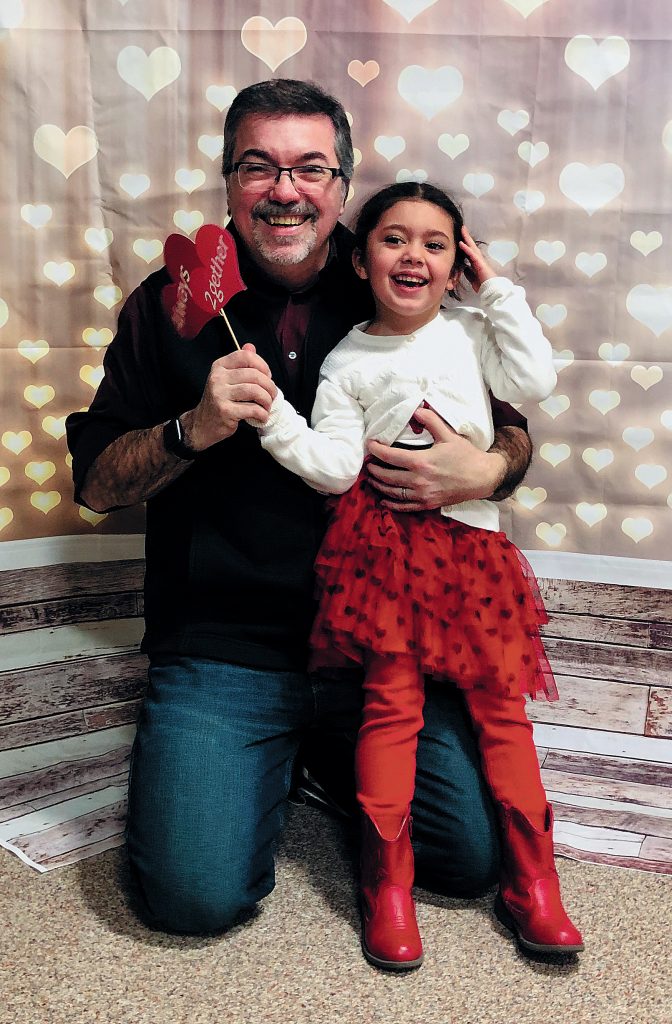 MANCHESTER – When local author Dan Szczesny’s daughter Uma born almost five and a half years ago, he began journaling their special bond. The result is his new book, “You & Me (Reflections on becoming your dad; Hobblebush Books, 2020).

With the inauguration of its “Reflections Series,” Szczesny, a long-time journalist, travel writer and speaker, shares how the birth of his daughter changed his life, a year at a time through a collection of brief essays.

Szczesny kept journals as his daughter grew, written through the eyes of her doting dad, through the first five years of her life.

“It was kind of strange how the book came about,” he said. “I never set out specifically to write a collection of essays about raising my daughter. That wasn’t something that I initially began doing.”

Since her birth, Szczesny has released four books – “Peppersass in Pennsylvania,” (2019), and “The White Mountain.” (2018) among them – but for the first year of Uma’s life, he was a stay at home dad. And now, with the pandemic, he is one again.

“During those first few months, we have a little bit of a difficult pregnancy and birth,” he shared. “There were complications and it was a pretty stressful time.”

As a writer, Szczesny was unable to freelance write during that period, and instead kept a journal, as a way to flex his creative muscles and record his daily chores, his personal feelings and how he spent any particular day, between paperwork and daddy duties.

“I would just turn to the journal over and over again,” he said. “And I wrote in the journal a lot. And during that first year, it became almost therapeutic for me. I could get my feelings out.”

Szczesny said there were many friends and family members who were interested in knowing how child rearing was going, and he didn’t have the bandwidth to constantly pick up the phone to share how young Uma’s life and his were progressing on a regular basis. So, he turned to social media, where he is quite active, and a couple of times a week he would post his journal postings as a way to keep folks informed.

“It occurred to me, as I was putting those notes out there, that they were becoming popular,” he said. “People started sharing them, and we started making new friends and it all occurred to me that what we were going through – this journey of parenthood, was not exclusive to us.”

Through his writings, he was accidentally touching upon a lot of universal philosophies and parenting challenges. As the years progressed, so did the journal entries.

“Are you familiar with NaNoWrimo, the November writing month?” he asked. “Beginning in 2017, I started taking part in that every November and instead of trying to write a novel, I began writing an essay a day.”

For those three years, he dedicated writing an essay to Uma and posting it on social media, which is how the collection came about. By 2019, Szczesny said he didn’t pitch it to his publisher, rather they were having a casual meeting about what might be on the editorial horizon.

His publisher told Szczesny about the ‘reflections series,’ which was to be non-fiction essays about a particular theme or subject.

“‘You practically have the book written,’ my publisher said,” Szczesny relayed. “That was the first time it occurred to me that I could put what I had written in the journal, into a book. I could actually do this. So, I spent the fall of 2019 gathering all the essays that I wrote.”

“So, this book was more a matter of editing, than writing,” he said. “They were there, and people seemed to enjoy them. We broke them down and there is one section dedicated to each year of her life, so far.”

The epistolary essays were the result of a project that Szczesny said he is very proud of.

“And if you had told me six months ago that I would be releasing this book in the middle of a worldwide pandemic, I would said you’re crazy,” he said with a chuckle. “But here we are.”

Szczesny said that this style of writing, triggered other thoughts and sparked his creativity and curiosity.

“I’m notorious for going down the research rabbit hole,” he said. “The thing about my writing in general is that I like making connections. I like the idea of time not existing and being able to connect our ancestors, the past and the present, to what my daughter is doing.”

Szczesny explained that one of his favorite sections in the book and one that drove his publisher crazy, is the famous joke that his daughter would tell: Why did the chicken cross the road?

“I didn’t’ tell her this joke,” he said. “She must have learned it from one of her friends. And as I was writing about, I wondered where that joke came from. Is there an etymology to that joke? It turns out there is.”

The joke first premiered in 1847, in “Knickerbocker Magazine” in New York. And Szczesny found it incredibly cool that the joke being told by his young daughter was published the same year that Thomas Edison was born and “Wuthering Heights” was released.

“I like having my writing being sort of a yo-yo,” he said. “I like to throw my yo-yo out there, and it picks up all these other things, and you pull it back to the theme. I did that with the ‘White Mountain.’ As I’m also a historian, I like collecting all of this information.”

Szczesny said he is always looking for story ideas and logs them onto index cards for reference, that he catalogues by theme. Those themes have found him venturing into poetry and short story realms, as a bit of a palette cleanser.

“I never thought of it that way,” he said. “I’ve always written something but my career as a journalist around the country, non-fiction and history and doing research and interview is my wheelhouse.”

But, Szczesny said that sometimes a story or idea doesn’t fit into the same category. He joked that’s he not a very good poet but enjoys the genre.

“It’s like a hobby,” he said. “As a way of assembling words or playing with form. Getting a lot of meaning out of only a few words. I look at poetry as a form of practice.”

Szczesny recently gave a webinar on memoir writing. He noted that most of our lives are all peaks and valleys. But mostly valleys.

“If all you’re doing is waiting to get to the next peak, you’re missing out on a whole lot of life,” he said. “If nothing else, having a five-year old when I’m little older – I’m not a young dad – I had her when I was 49 when she was born – so it’s given me a lot of opportunity to see the mundane through more awestruck eyes.”

In his early journals, Szczesny said he was pouring his soul onto the page; ‘bleeding onto the page,’ as Hemingway would say. Much of what he wrote was raw and personal, not knowing which way things were headed during the first months or year of Uma’s life.

“It was a traumatic time for us,” he said. “A lot of stuff that I talked about in those early days was ‘today.’ I didn’t know what tomorrow was going to bring. So, I had better enjoy giving Uma her first bottle. I better enjoy that diaper change. It really put me in a place where five years later I can pull myself back and really appreciate the every day.”

As for writing during self-isolation, Szczesny said that creatively, while his wife works from home, he is back to being a stay at home dad.

“We have grandparents nearby and they are part of our circle,” he said. “I hate to use the word ‘babysitting,’ because they are part of the family. But they’re able to take her for a few hours here and there.”

Szczesny added that he’s never felt busier than during this stay-at-home time. ‘

“It feels like I don’t have any time at all,” he shared. “I’m constantly either taking care of her or doing some chores or trying to get to some writing. Or trying to sleep or eat, which tends to take a back seat.”

While he’s busier than he’s ever been, Szczesny is focusing on freelance writing versus events speaking. He would often give presentations at libraries or retirement communities, where are all shut down. Next month, he’ll launch this book, doing virtual speaking, and some Zoom events.

“The speaking events of what I like the most,” he said. “What’s the joke the marathon runners? I hate running, but I love finishing. Getting up in front of a crowd of people and telling stories – that’s finishing.”