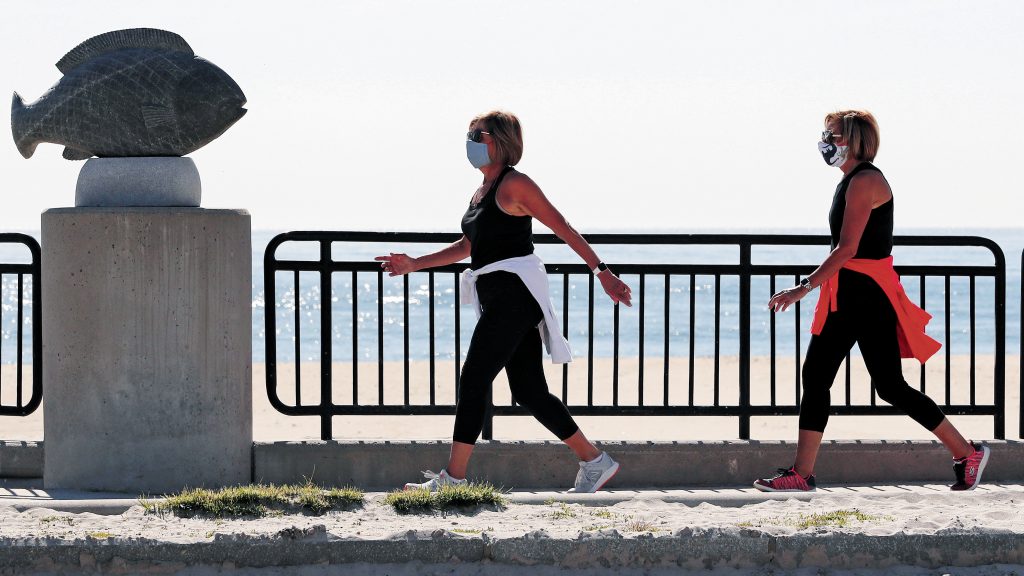 Two women, wearing protective masks due to the COVID-19 virus outbreak, walk on a sidewalk adjacent to an empty Hampton Beach in Hampton, N.H., Thursday, May 21, 2020. Beaches in New Hampshire have been closed since March by state order due to the coronavirus. (AP Photo/Charles Krupa)

CONCORD, N.H. (AP) — New Hampshire is considering a different approach than its neighbors when it comes to allowing out-of-state residents back in its hotels and other lodging establishments.

In an effort to prevent the spread of the coronavirus, such accommodations would be limited to New Hampshire residents or out-of-staters who have quarantined at home for 14 days before arrival, according to a proposal submitted Thursday to the Economic Reopening Task Force.

The proposal under consideration in New Hampshire would be an update to recommendations approved by the task force on May 12. Those recommendations included a May 22 opening date, but public health officials and Gov. Chris Sununu haven’t acted on them yet.

The task force also heard proposals Thursday related to road races, driver’s education and the tattoo and esthetics industries. Some members also pushed for revisiting previous rules on the reopening of hair salons, particularly one that limits appointments to one hour.

“It has hampered the salons that have opened,” said Sen. Sharon Carson, R-Londonderry. “We should send a strong recommendation from the task force to let them do their jobs and give them the time they need.”

Other coronavirus developments in New Hampshire:

More than 8,000 initial unemployment claims were filed in New Hampshire last week, down more than 1,500 from the previous week, the U.S. Department of Labor reported Thursday.

The latest number covers new claims through May 16.

The number of new claims in a week peaked at 39,000 in early April and has since been declining.