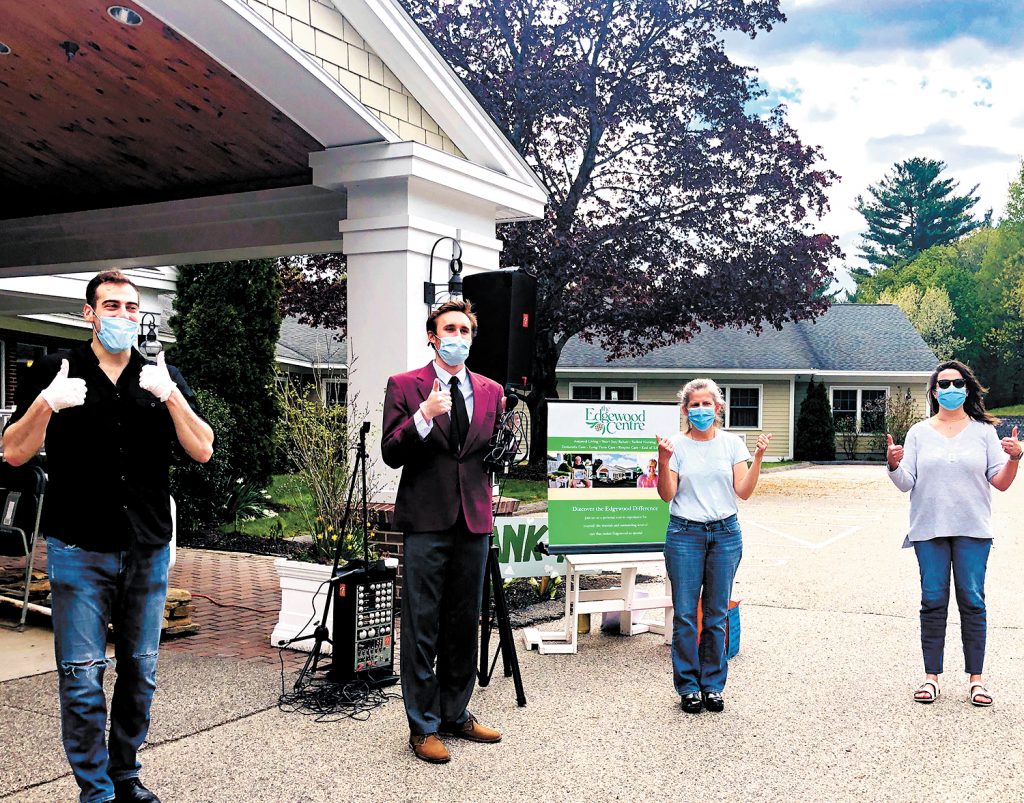 BEDFORD – English poet Lord Byron said, “Always laugh when you can. It is cheap medicine.”

Two New York City comedians, Trevor Glassman and Connor Kwiecien, were doing open mics and playing the circuit in Manhattan when COVID-19 forced them to make a decision as whether to stay in a shuttered city or return to their family roots in New Hampshire.

Since being back, they’ve taken their comedy to the streets, or to the curb anyway, providing laughter with their “Curbside Comedy.” They’ve performed several shows, including one in Exeter, from where Kwiecien hails, and they’ve also performed a show for the nursing staff at the Edgewood Centre in Portsmouth. And the duo said they’re just getting warmed up.

The shows also are to benefit the charities, Direct Relief, where funds go directly to health care workers; and “Comedy Gives Back,” which helps comics who can’t perform out right now.

“We talked a lot and thought, what better way to help those who are fighting the virus,” Kwiecien said. “As well as the people, just like us, who aren’t fortunate enough to be performing right now.”

As for the return to the Granite State, Kwiecien said he had to decide whether to stay or go in New York and had to make that decision quickly.

“I made a split decision within 16 hours to go home,” Kwiecien said. “That meant leaving behind the job I had in the city, leaving behind comedy and I was thinking, one week with New York City closed down isn’t too bad. Two weeks could be tough, three weeks would be really bad. I didn’t want to see how it would look in three weeks and here we are eight weeks later.”

As the Big Apple is still not open for business, Kwiecien said he feels good about his decision to retreat for a while.

“Leaving behind comedy and not performing, well, no one in the city is performing now,” he said. “It’s kind of a moot point.”

Three weeks ago, Kwiecien and Glassman, who met each other at an open mic last October, talked about a comedy concept that Kwiecien had and the two followed up with that idea a few weeks later about doing comedy shows in New Hampshire while observing social distancing and adhering to CDC guidelines.

Kwiecien noted that a lot of people looking for laughs turned to the internet. He does a podcast with a friend, called “Small Town Radio,” began doing some YouTube videos, and kept busy on social media, with his page, “Sometimes Funny Content” on Instagram.

“I try and post daily visual jokes around a specific topic,” he said. “So, I was toiling away at different projects trying to strengthen that muscle for writing jokes. But those things weren’t comparing to actually getting in front of people and really testing out material in real time and getting a reaction in real time.”

Glassman said he has kept busy as well, writing stand-up material each day for roughly an hour and a half, and also working on a late-night variety show packet so that he can try to get his foot in the door into a late-night market once the COVID dust has settled.

“As far as creating content, I’ve focused on Instagram posts and videos,” he said. “And I unfortunately joined the wave of Tik-Tok, which is the downfall of everyone, I think.”

Kwiecien and Glassman started laughing at the Tik-Tok reference.

Glassman has been also working on the shows and business and branding so that when this is over, he can move forward.

“When this quarantine does lift,” he added, “I’ll be able to get off the floor and get going.”

Kwiecien said his approach to his own comedy material is to make it universal – in that he can use that material at a club in NYC or right here in New Hampshire.

“I’m using my ‘A’ material,” he said. “I go through it, saying, ‘I do need that word, I don’t need that word.’ I try to hone it but obviously but with different crowds, some jokes work better than others, so you pick and choose. For these New Hampshire shows, I trying to do the best show that I can and get real feedback on what I think is my strongest stuff. So far, it’s been positive.”

Glassman said his comedy philosophy is to have twice as much material as the amount of time you’ve been allotted to tell jokes.

“With Connor and I, we’re doing about 15-20 minutes of comedy each,” he said. “I really have probably a tight 20 minutes that I can choose from. So, I do about 2/3 of my time, I stick to what I know works. And somewhere in the middle, I’ll be trying new stuff so I can keep tightening it.”

“We did a random show in someone’s back yard,” he said. “They were all drinking and talking to me so I could step outside my material and talk with them. They were completely engaged.”

Glassman said all of the shows that they’ve done have gone extremely well and that their audience has been especially appreciative.

The format for the shows is for Kwiecien to introduce the show and himself and do his set. And then, he will introduce Glassman, who performs his set. Then the two comics take questions from the audience, which is typically ten people, again, adhering to guidelines. They both wear masks and gloves for protection.

“We found out after the first show that we did, that a lot of people have questions,” Kwiecien said. “They want to know what it’s like to do comedy in New York and what it’s like to be doing comedy in New Hampshire. And through that, as is the nature of being comedians, we try to find little pockets of humor and there is some sense of us being a comedy duo at the end of our sets.”

When the guys do the Q&A, it allows them to interact with the audience, step outside their routines and have some fun as a two-fer.

“Feeding off of one another is really great,” Glassman said. “People ask what comics we like and what we do when we’re not doing comedy and why we are the way we are.”

“What we’re really building is that community connection that’s been lacking,” Kwiecien chimed. “I feel that a lot of people are finally being able to step outside in a safe and appropriate manner and have these interactions. I think people are genuinely interested, but also genuinely looking for that type of information.”

So far, they’ve done four shows and have four more shows this weekend, with more to follow.

“We keep pretty good caps on our audience numbers,” Kwiecien said. “It’s a bit of a moving target. We’re seeing what the state says with different guidelines but with our shows, we try to keep the numbers right at ten.”

When they went to Edgewood on Saturday, and as they were invited, so the facility controlled the number of audience members.

“Technically, they can have as many people as they want, within reason,” Kwiecien said. “There were five people spread out and then there were people in their cars watching as well.”

The boys have another commonality – that being the influence of George Carlin.

“Actually, the first comic I ever saw was Katt Williams,” Glassman said. “Which is not what I do but I really got into stand-up comedy because I saw this dude on the stage, basically being an idiot for people. And I thought, ‘Hey, I would be pretty good at that.’ And I am. I am one big idiot. But I really loved George Carlin growing up – watching him be so smart and so witty and so funny at the same time.”

“But I honestly don’t watch that much comedy,” Glassman continued. “Probably because I’m around it all the time.”

Kwiecien said last year, he was living in Florida and drove back to the north along the east coast, listening to Carlin the entire way.

“I downloaded all of his albums to Spotify,” he said. “Carlin is definitely a big one. I’d say John Mulaney has that tone and that universal likability which I kind of strive for. He stands in the middle. He does swear but not in an edgy way.”

To book “Curbside Comedy,” for public spaces, restaurants, bars, nursing homes, hospitals, and private homes/communities, go to either of their websites. Connor’s is www.connorkwiecien.com (click “Book a Comedy Show”); and Trevor’s is www.trevorgcomedy.com and (click “Bookings”).