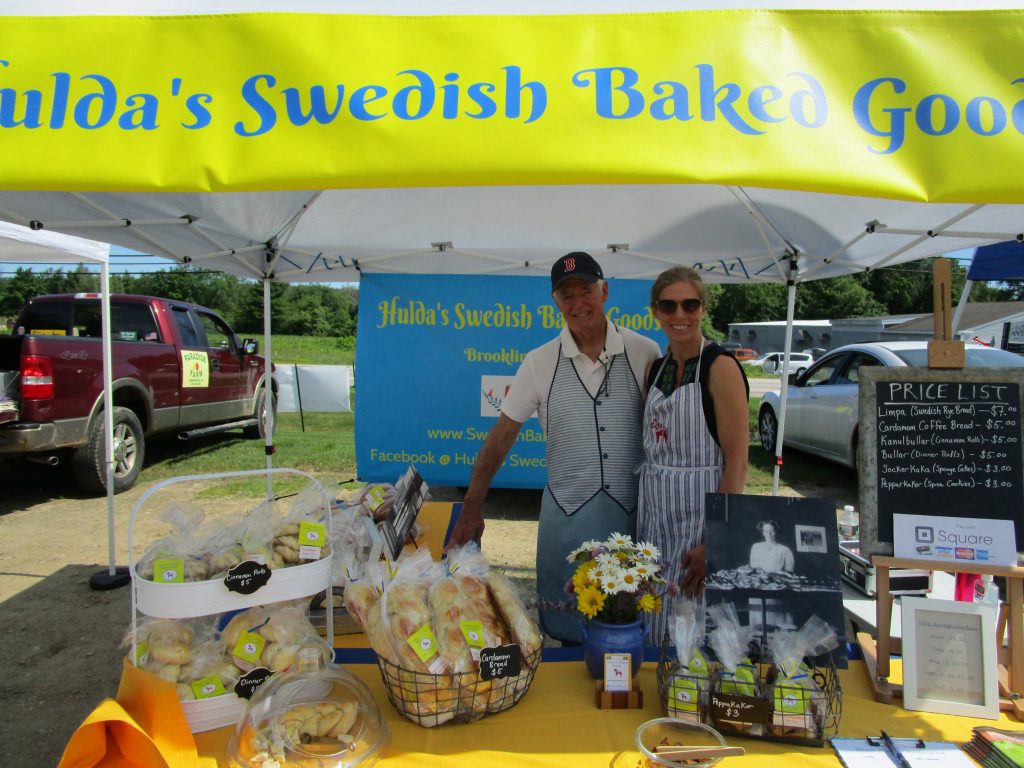 MILFORD – “It’s going to be bigger than ever!”

So, touts Adrienne Colsia, manager of the Milford Farmers Market, as it opens for its 42nd outdoor market season on Saturday, Jun. 13 from 10a.m. – 1p.m. (And every Saturday morning through Oct. 10.) The familiar spot itself remains the same – 300 Elm Street across from N.H. Antique Coop.

“We had to put the brakes on a little,” she said. “Because of social distancing, I had to spread the vendors out a little wider. We have a good lot to do it in, but it’s going to take up that whole space.”

Even with a few precautions taken, Colsia said there will be between 16 and 19 vendors at every market. And the selections again this year are rich and plentiful: vegetables, olive oil, black garlic, perennials and cut flowers, craft beer, local wine, meats (beef, lamb, pork, chicken and duck), eggs, goat milk, honey, maple syrup, fresh cut fish, (fresh that morning from the docks), fresh cheese, (using milk from their own cow).

One of the obvious odes to a farmers market is that folks get to buy fresh ­- something that’s not lost on customers in this current climate as local businesses and restaurants begin to reopen.

“Local is huge,” Colsia said. “Get to know your farmer – you can get perks. And you know that the food will be clean- it hasn’t been around the country on a truck, not knowing who has touched it. So, you’re not going to find cleaner food.”

Colsia also explained that there will be a lot of safety protocols in place for the safety of everyone – vendors and customers alike.

The other key difference- no touching the product.

“We ask that you let the vendor pick up what you’ve selected and bag it for you,” Colsia said. “We just want to keep everything clean. That way the customer will know the only other person who has touched that is the vendor.”

Soaps may present a tiny problem, as people are so accustomed to being in a shop and selecting a soap to sample sniff. Colsia said samples will be available in this case for people to sample the scent. But no other samples of other wares will be made available at the market.

“That is a challenging one,” she noted. “The soap samples will be wrapped individually, and the vendor will have them in a spot where the customer can smell them but not within six feet of the vendor. Other than that, there won’t be samples. People are used to going up to the craft beer guy or the baker – this year, no sampling whatsoever and there’s no eating or drinking inside the market.”

Craft beer and wine will be sold in bottles.

Such are just some of the tricks to playing it safe.

“It’s a lot of work,” Colsia admitted. “And we have to also encourage people not to stay- it’s more of a grab and go. It sounds kind of weird, but we don’t want people to feel unwelcome either. It’s a balance.”

Colsia mentioned another no-no: The farmers market will go on, sans music.

“So far, I cancelled for June and July,” she said. “I haven’t cancelled August or September or October. But when I talk to other farmers markets, they’re having no music whatsoever.”

Staying safe is of the utmost importance, Colsia stressed. She also mentioned that this year there will be just one entrance.

“There’s a front parking lot and there’s an overflow parking lot in the back,” she said. “But they won’t be able to enter from that back lot – just the front one. Fortunately, we have a really big lot and people can mill about. There will also be lines painted in front of each vendor so people will know where to stand. I’m also going to try and encourage one-way shopping in a counterclockwise direction.”

People will enter and exit through the same (separate) areas.

There’s so much new to know,” Colsia said.

Check out next week’s Cabinet for new info.