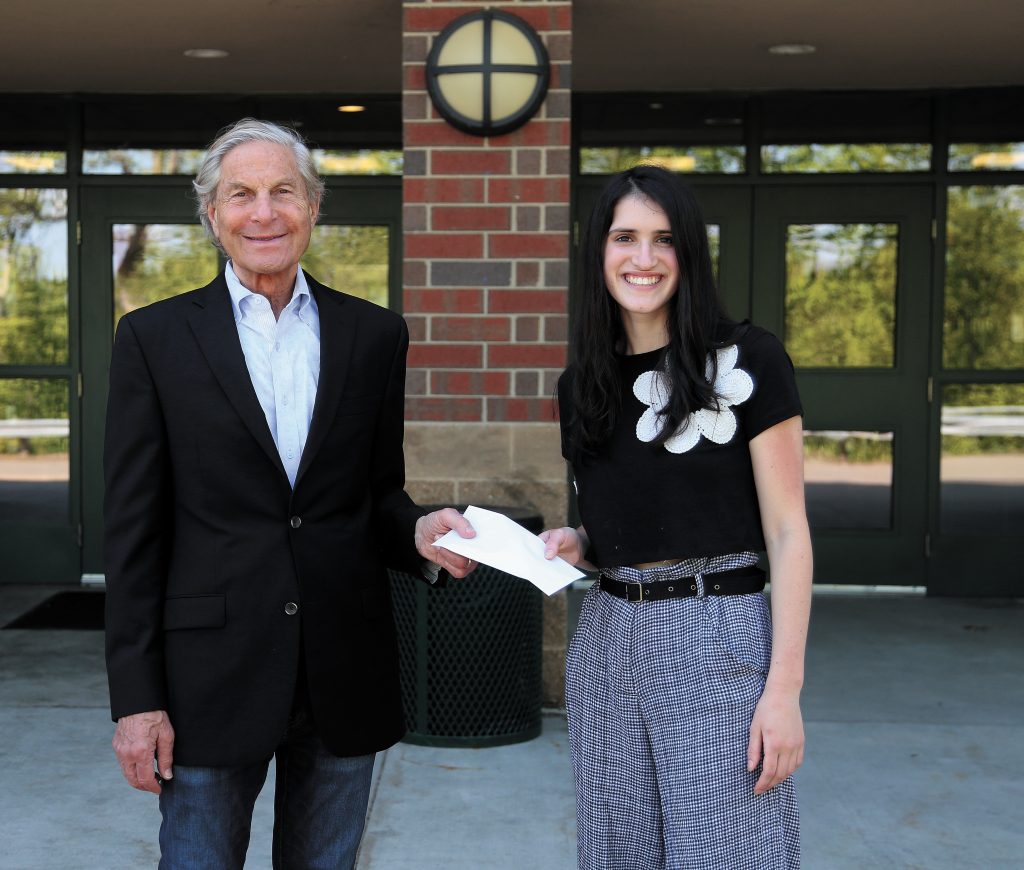 Photo by Allegra Boverman. Emma Rosenbaum of Bedford received the Brodsky Prize from Howard Brodsky at Bedford High School on May 26, 2020. She will attend Northwestern University in the fall and will major in journalism.

MANCHESTER – Bedford High School senior Emma Rosenbaum is the winner of the 2020 Brodsky Prize, a $5,000 cash award that recognizes journalistic excellence and “out of the box” thinking by high school journalists.

Rosenbaum, 18, is the founder and editor-in-chief of The Runaway Bulldog, an independent, student-run news source for Bedford High School, and alternative outlet to the school newspaper.

She started her news source two years ago, after community outrage about Bedford High went unreported by the official, student-run newspaper. “I knew the school newspaper would not cover the issue because it avoids controversial topics. Reading inflammatory parent comments on social media finally pushed me to act. I founded my own newspaper, independent from the school.” The Runaway Bulldog now spans three online platforms and receives about 1000 readers each week.

Brodsky Prize judges were unanimous in their choice of Rosenbaum, chosen from the largest pool of applicants received in the Prize’s three-year history.

“I vividly remember 30 years ago when my son Jeff was co-editor of his school newspaper, and it was shut down by the principal, and the impact that action had on Jeff’s life at the time. It is gratifying to hear remarkable stories like Emma Rosenbaum who still use the power of the school press to challenge authority a quarter of century later,” says Howard Brodsky, CEO of CCA Global Partners.

Rosenbaum will use some of the prize money to support the online news source in the coming year. She will also use the award to help meet future college expenses when she enrolls this fall at Northwestern University’s Medill School of Journalism.

In her submission essay, Rosenbaum wrote, “This paper transformed my life. It gave me a sense of direction. It gave me the confidence to talk to and call out anyone. It taught me the discipline of releasing content once a week, no matter what was going on in my life.”

The Brodsky Prize was established in 2018 by Jeffrey Brodsky, who was co-editor of The Little Green during the early 1990s. He hopes to encourage “out-of-the-box efforts and innovation” by a new generation of student journalists. Brodsky, now 46, studied oral history and communications at Columbia University, becoming a historian and documentary producer before illness forced his retirement and return to his hometown of Manchester, NH.

The Brodsky Prize is open to all New Hampshire public and parochial high school students. The prize is administered through the Nackey S. Loeb School of Communications. Judges are Brodsky’s father, Howard Brodsky; Misbah Tahir, CFO of IGM Biosciences, who was co-editor of The Little Green with Brodsky; former New Hampshire Union Leader Publisher and President Joseph McQuaid; and Laura Simoes, executive director of the Nackey Loeb School.

For more information about the Brodsky Prize, visit thebrodskyprize.com.