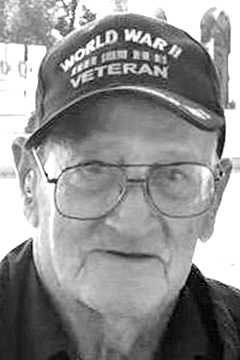 Danny joined the U.S. Navy on his 18th birthday and proudly served his country during World War II aboard the USS Hall, in the Atlantic, where it was as one of three destroyers escorting President Franklin Roosevelt to the Teheran Conference, and in the Pacific Theater, where it was involved in the invasion of the Marshall Islands and the battle for Okinawa. He was awarded the Asiatic Pacific Area Service Medal, the Philippine Liberation Ribbon, and the American Area World War II Victory Medal. He was honorably discharged on November 11, 1945.

He was a member of the Riccardi-Hartshorn Post #23 American Legion and Harley-Sanford Post #4368 VFW in Milford. In 2010 he and others successfully fought to ensure that occupants of a senior living facility could continue flying the American flag when management tried to prohibit it.

Danny spent many years working in the secondary sales market, primarily in New Hampshire, Texas and Florida. His adventures took him many places, as he often chose to take the path less travelled, without knowing where that path would end.

Danny will be interred with military honors at the New Hampshire State Veterans Cemetery at a later date. To view an online tribute, leave a condolence message, or for updated service information please go to www.phaneuf.net.