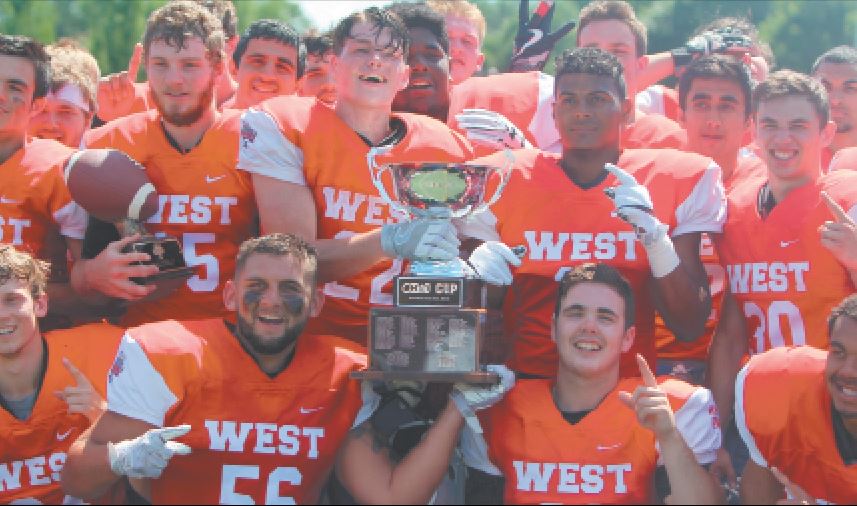 Photo by TOM KING Team West celebrates with the CHaD Cup following a 25-14 win over the East on Sunday at Manchester Memorial.

Merrimack’s Justin Grassini received the Bo Dickson Most Valuable Player award for the West’s 25-14 win over the East in the Sunday resumption of the sixth annual CHaD All-Star Football Game at Manchester Memorial High School.

But what about the Most Valuable Play? That may have belonged to former Souhegan High School standout Tucker Aiello, whose 20-yard interception return for a touchdown midway through the third quarter gave the West a commanding 22-8 lead.

“That interception? That’s a pro move,” West defensive coordinator Paul Lavigne said. “He hit that at full tilt and he didn’t slow down. That was the turning point, I thought. … That opened it up right there.”

“That pick six really pumped us up and helped our offense a little bit,” Grassini said. “We were just fired up.”

“They sniffed that out well,” East coach Craig Kozens, of Laconia, said, his team somewhat undermanned. “We had only one offense to run. Considering what we had, I thought we did a good job. … We made it a game, which is good for the game.”

The game started Friday night, but was suspended due to heavy rain and thunderstorms. Upon resumption Sunday, the West was leading 14-8 when East quarterback Jake Stevens, of Londonderry, threw one seemingly up for grabs off his back foot under pressure. Aiello rushed in and grabbed it, zipping into the end zone untouched with 7:49 left in the third quarter.

Aiello said he was keying on the play as Lavigne had predicted a pass to his side. “Someone put pressure on (Stevens), he was throwing off his back foot, and it was just lobbed up there,” Aiello said. “We wanted to take their run game early, made them want to pass the ball and we definitely did that and came up with a couple of interceptions that were big for us. But a pick six in the CHaD Game is definitely the highlight (of his career).”

As Aiello alluded, the East ran for just 26 yards. Top running threat Christian Peete (Portsmouth), who had three carries in the first quarter before the game was suspended Friday night, was one of a few players who couldn’t make it back. It showed, as the Stevens had to throw 47 times, completing 23 for 282 yards.

But while the first interception he threw gave the West points, the second one stopped the East from scoring possibly the tying points. Down 22-14 late in the third, Stevens had just completed a 40-yard bomb to Kennett’s Pat Culen, putting the East in the red zone. But his next pass was picked off by the West’s Henry Yianakopolos (Hillsboro-Deering/Hopkinton) at the 5-yard line.

Yianakopolos added a 23-yard field goal with 6:19 left that more or less sealed the deal, giving the West a 4-2 edge in the series.

Meanwhile, Grassini completed 8 of 19 for 145 yards, but did direct the West to two TDs, one Friday (Leahy’s 21-yard run that made it 7-0) and Ryan Milliken’s 22-yard run shortly after play resumed Sunday that made it 14-0 with 9:24 left in the half. “I think that touchdown really set the tone for the game,” Grassini said.

Was he surprised to get the MVP?

The East, despite being limited, didn’t exactly roll over. Stevens hit former Londonderry teammate Peter Navarro on an 18-yard TD just 24 seconds left before the half to make it 14-8.

And about four minutes after Aiello’s big score, the East turned a fumble by the other West QB, Goffstown’s Nikolas Moquin, into Navarro’s second TD catch, this one an 11-yarder, that made it 22-14 after the two-point conversion failed.

“Defensively we did some nice things, we shut the run down,” West coach Jim Schubert said. “They (the East) played tough, I have to tip my cap to them. But our kids played hard, too.”

Lavigne has been an assistant and head coach for the CHaD Game, but at age 74, he said this was probably his last game coaching.

“I promised my wife this would be my last game,” Lavigne, the former Milford and Manchester West head coach. “I’ve got to get some stuff done in my life. I’m 74, I’m not getting any younger, and I thought I’d just sit back and enjoy life a little bit.”

Last but not least, the game, at last total, had raised $246,000 – and counting – for CHaD. It was announced late in the fourth quarter.

Here are a few tids and bits as we welcome in June, hoping it brings progress following all the rough times we’ve ...