Milford High defended the South’s rep and rocked unbeaten Kennett – in Conway – on Friday night, proving it has rebounded from the lone loss to Souhegan. The South is now 5-1 vs. the North, by the way.

Without a calculator or abacus, you can see that the South will take at least five of the eight playoff spots. A 7-6 Plymouth win over Saint Thomas could prevent a sixth ultimately, if, as expected the Bobcats run the table against three teams with a combined 4-14 mark.

Right now, in the South, it’s Alvirne and Milford at 5-1 with Souhegan, Pelham and Hollis Brookline at 4-2.

West and Saint Thomas are 3-3, looking for someone to stumble.

Pelham High presented the latest plot twist with a 21-20 win in overtime at Souhegan.

The Sabers entered on a high after outgunning previously unbeaten Milford a week ago. The euphoria was short-lived, though, as the Pythons, who have climbed back into the chase with a couple gritty wins of their own, were here to play.

Folks around Amherst will be talking about Bowkett’s choice to go for two and the win after Ryan Hauser scored from the 10 on first down.

Bowkett called a time out after his team answered to talk it over.

“Just a gut feeling. As coaches, we were going back and forth,” the coach said. “We asked the kids, and it was unanimous. Let’s win the game now. You call the play, and you live with it.”

But a botched exchange would doom the Sabers, now 4-2, and send Pelham into a wild celebration on the field.

“Losing stinks always,” said Bowkett. “I’m just proud of our guys, how they battled back and gave us a chance to win at the end.

Defense certainly ruled the night. After posting 46 points last week, the Sabers were held to 211 yards of offense.

“We knew their defense was going to be great. That was no shock to us,” said Bowkett. “They did a great job.”

Fortunately, Souhegan’s defense also stood up to the task, anchored up front by Alex Karpawich, Mike Maroun and Will Darnall.

The Sabers struck first when Austin Jain hit Connor Holland for a 29-yard TD on the post route. Riley Lawhorn’s kick made it 7-0.

Neither team would budge until deep into the fourth. Ian Hoey danced seven yards to put Pelham up 14-7 with 4:42 to play, but that Saber resiliency resonated when Jain (18-27-2, 168 yards) moved Souhegan down smartly, 64 yards on 11 plays.

The junior hit Lawhorn, Holland, Ryan Hauser and Luke Manning for key completions before diving in from the 1 and knotting things at 14-14 with 1:42 left.

That set up the overtime, with Pelham taking the ball first. Wildcat QB Charlie Katin score on 2nd-and-10 to give Pelham the lead and leave Bowkett with the difficult choice.

On the night, Jain spread the ball around nicely to six different Saber receivers. Holland caught four for 52 yards, and Aidan Casey added three for 33.

The usual doubt that might have crept in after a team’s first loss certainly didn’t harm Milford.

Neither did the three-hour bus ride to Conway.

“The Milford Boosters helped us out and got us a motor coach for the three-hour ride there on Friday night, so that was pretty nice,” said Spartans’ senior Matt Hannon.

“So was the pregame meal. We stopped for barbecue, ribs, marinated chicken, brisket, it was really very nice.”

Gavin Urda, Caden Zalenski and J.R. Ughu all had big nights on offense for Milford, and Darien Kimball came up with a big interception.

Milford also welcomed all-Division II South lineman Colton Burrows back to the trenches. He had been missing since the first defensive series of the season.

“He was dominating people,” said Hannon. “He came up with a bunch of big plays.”

For Milford, it was refreshing to only give up 21 points after two straight 40-plus weeks.

“We felt good and had some momentum going before the Souhegan game. That loss felt like a speed bump. Winning again feels like we’re back on track,” said

“None of us doubted ourselves. We supported each other. We help each other out, no matter what you do. Defensively, it was just us putting our foot in the ground. We realized we just weren’t focused. At Kennett, we were looking at not giving up points. I think we did a pretty good job.”

Milford now has 0-6 Sanborn and 1-5 ConVal in the next two weeks before hosting Alvirne in the regular-season finale.

Yes, the Broncos, who have four straight outscoring the opposition 141-29, still have 1-5 John Stark and 4-2 HB remaining, but you can help but think that last week of the regular season will be epic, with the South Conference title hanging in the

Friday night’s overtime stumble to Pelham might have been more about missed Saber opportunities than anything else.

Give credit to Souhegan coach Robin Bowkett, not just for taking the shot and going for two in the first overtime but for the way he demanded his kids stay together after the disappointment.

“Family” was a word he used in the huddle at least 4-5 times, and the coach believes it.

The Sabers can still control their own playoff destiny, most likely needing two wins in the last three.

First, West has been shut out twice in the last three weeks, by Alvirne and Hollis Brookline.

Second, the Sabers showed they could win at Bow last year, upsetting the Falcons in the Division II quarterfinals.

Saturday in “The Swamp” at Hollis should be an absolute war. 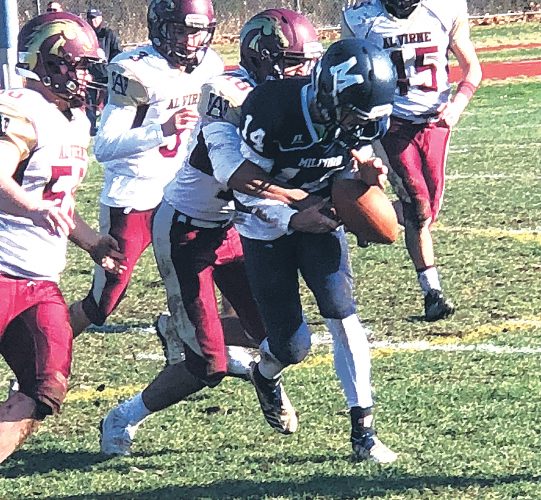