NASHUA – About the only quiz Caroline Fischer has failed this fall was when the reporter asked her post-race on Saturday how many state or all-state championships she had won in four years at Bishop Guertin High School.

She’s excused on that one. This is cross country, not calculus, and no abacus was handy.

Still, Fischer schooled her competition on the Mine Falls Park course here, rolling to the title with a wire-to-wire win in the NHIAA Meet of Champions.

The winning time of 17:55.3 on the 5k course was 4.2 seconds better than hard-charging Souhegan sophomore Chloe Trudel (17:59.5) but was hardly a tank-emptier for Fischer.

Healthy, happy and absolutely tearing up the trails, the recent Providence College commit has eyes on New Englands and

“I haven’t gotten that (total track and cross country) number for you,” said Fischer with the utmost humility. “But I hadn’t ever won this race before, so I’m very excited. I am very grateful for that.”

Trudel’s stretch run, getting past Guertin senior Caroline Towle (third, 18:02.8) was a team tone-setter as the Sabers took their Division II state title from a week ago and added to the trophy case with an MOC championship.

Souhegan finished with 80 points, well ahead of BG which was second at 109.

In fact, it was a pair of Saber seniors – Georgia Jones (fourth, 18:11.2) and Mackenzie Hayden (fifth, 18:11.7) completing a dominant performance from the area schools, sweeping the top five spots.

For Fischer, this was all about running her own race, which she did, literally, from the opening gun. By the first half mile, she had 15 yards on the field and that margin grew at times.

“I think I’ll get the competition definitely next week at New Englands,” said Fischer. “That won’t be how it will be next week and when I race at the Foot Locker Regionals.

“This will be the last race I’ll be out in front (like on Saturday), so hopefully I will be looking at some better performances in my future.”

Campbell was 16th, paced by junior Cassie Hemming who was 29th. 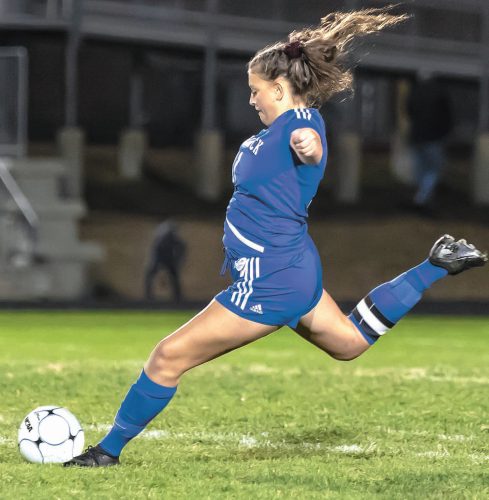