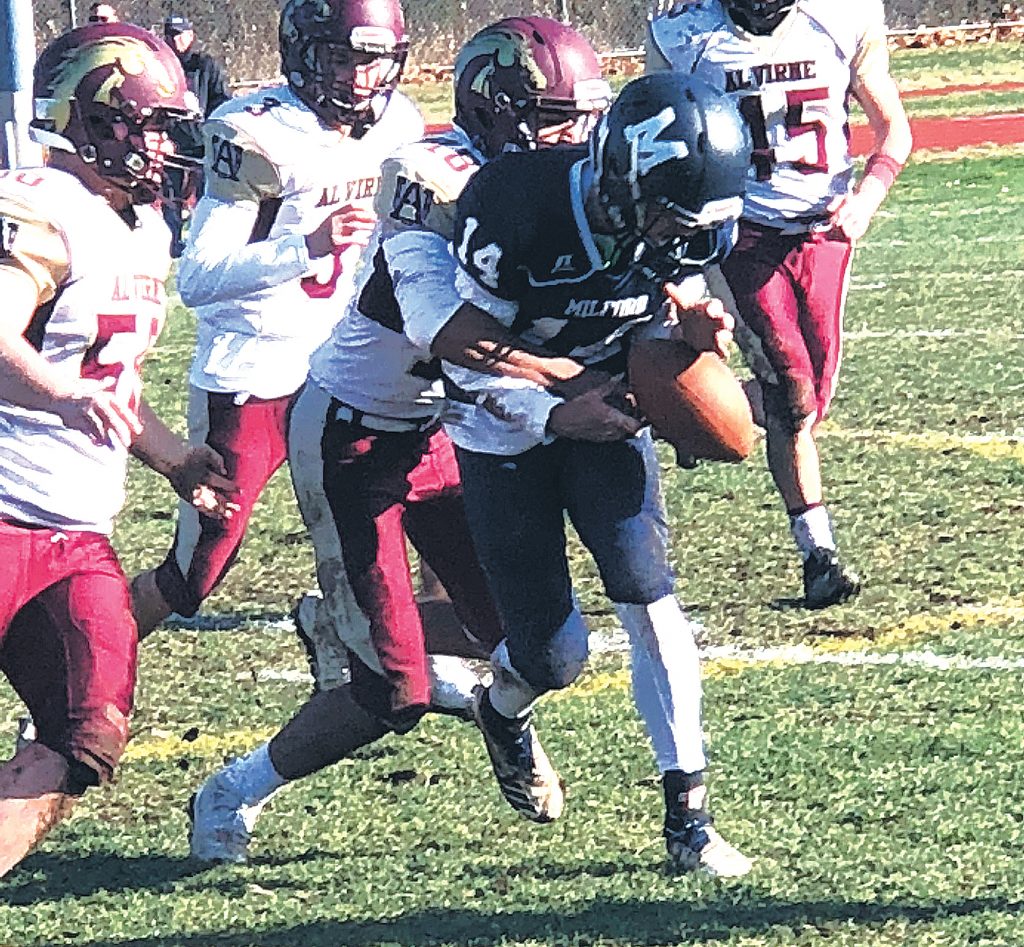 One local entity, the Milford High Spartans, can call themselves South Conference champions. The other, Souhegan High, owns a win over those same Spartans.

Still, the high school football season came to an end prematurely for both as the Sabers and Spartans were eliminated in the Division II state quarterfinals on Saturday.

Each team tangled with the team that it had faced in the regular-season finale. And that was an unlucky formula for both.

Five big first-half pass connections between Kyle Gora and Kyle Boucher and some excellent defense sat at the center of the Alvirne Broncos’ 20-7 victory over host Milford.

Just a little more than one week after their epic overtime battle – won by Milford on its home field the previous Friday night – the two teams faced off with advancement or expulsion on the line. And coach Tarek Rothe’s seventh-seeded Broncos were the stronger team by far, racing out to a 20-0 lead by halftime and frustrating the second-ranked Spartans’ comeback hopes at nearly every turn in the second half.

Alvirne had dropped its final two regular season games – to Hollis Brookline and Milford – to finish up at 6-3 overall. The host Spartans went an excellent 8-1 overall and won their final four contests of the regular season. But the Broncos got the final word in the playoff game, which was something upon which coach Rothe was

“Coming into today, I told my team with its 27 seniors that I would bet everything I own that they wouldn’t lose three games in a row. And they didn’t,” said coach Rothe.

Alvirne caught the first break of the game – on the opening kick-off – and made it count. The Broncos drilled a short, rolling kick toward the Spartans on the first play of the day, with the football banging off of the ankle of a Spartan. Versatile senior Morgan Williams would make the first of his several big plays by diving on the loose ball, and the visitors began the first offensive series of the game at the Milford 45-yard-line.

Morgan Williams made his second big play of the day with a little more than nine minutes to go in the half when he forced Milford quarterback Gavin Urda to fumble the ball away. Alvirne started its next series at the Milford 49, and four plays later the Broncos were celebrating Gora’s 44-yard scoring pass to Grady Hudson. This time the two-point conversion was successful with a pass from Boucher to Alec Prescott, and the score ballooned to 20-0 with the host Spartans left scratching their heads and kicking the soft turf of their field.

The half would end with that tally up on the scoreboard, and Alvirne having amassed 271 yards worth of offense while holding Milford to a mere 53. The quarterback Gora completed eight of 12 passes for 206 yards and three scores. Boucher caught five tosses for 128 yards and two of the scores.

Facing a big comeback effort, the Spartans then put their first offensive series of the new half to great use by reeling off a 12-play effort which culminated with Urda’s five-yard sprint to pay-dirt. Colin Gregg’s extra-point was good, and it was a 20-7 contest.

The hosts got as far as the Alvirne 36 before losing the ball on downs on their next series, and next they got inside the Broncos’ 10 before Urda attempted to maximize a gain in a scrum of bodies and had the ball stripped for another fumble at the visitors’ 5-yard-line.

The Broncos then sought to run out the remaining 3:32, but had to line up to punt the ball away on fourth down at their own 36 with a little more than a minute to go. Rothe had a final trick up his sleeve however, with Williams making his third big play of the day by sprinting the ball on a fake punt which gained a huge 29 yards. And all that remained was to have the clock run down to zero.

The victors wound up notching 365 offensive yards, with Gora connecting on nine of the 16 passes he attempted for 228 yards and three scores. His defense held Milford to 210 total offensive yards, with Spartans’ signal-caller Urda perhaps gaining a bit of solace from having completed seven of 10 passes (102 yards) and rushed for 78 on 15 carries.

Top-seeded Bow defeated No. 8 Souhegan, 51-7. The 9-0 Falcons appeared to dominate the Sabers (5-4), who only managed a Nick Zampella 10-yard TD reception on the day.

“They shut down our offense and we couldn’t get things going,” Sabers coach Robin Bowkett said. “We sold out on the run and they did a great job finding our weak spots. We just got out-coached and outplayed.”