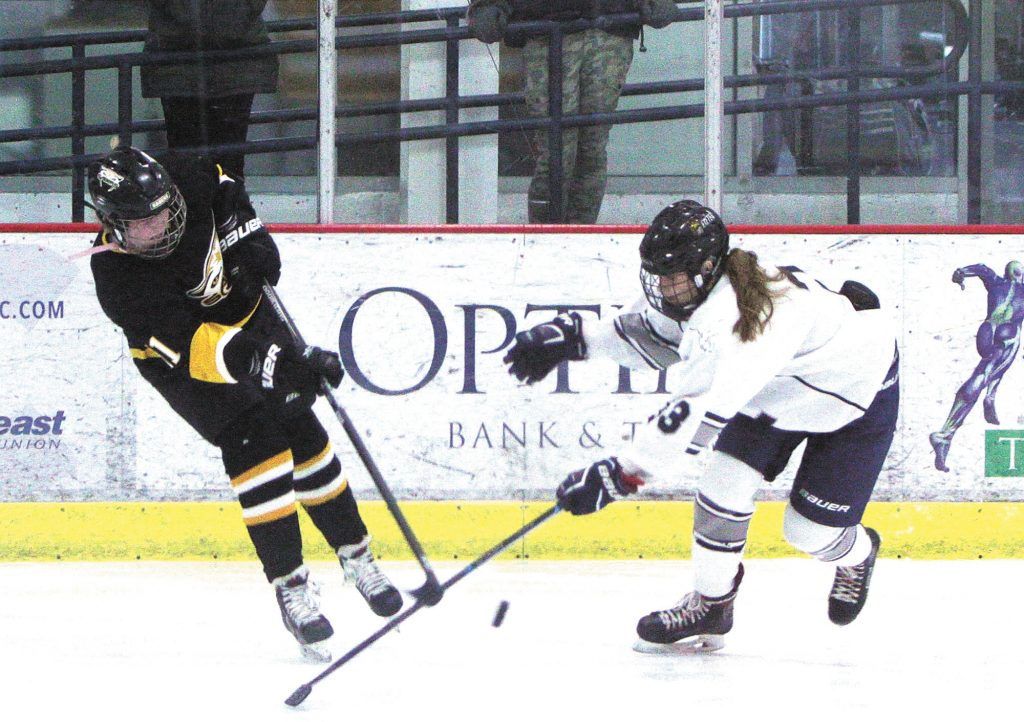 The sixth-seeded Blue Hawks put up goals 85, 83 and 126 seconds into each of the periods and kept the No. 11 Sabers at bay, advancing to Friday’s state quarterfinal at Oyster River-Portsmouth.

“One early in every period. The last couple games we’ve been good at getting going early, too,” said coach Kelli Braley, whose

“That first goal in the first

period, I would chalk up to nerves and adrenaline and all that. We just came out a little too flat in each period, and they were gunning.”

Caitlyn Knowles scored the first one, and Shauna Vadeboncoeur had the goal in the second.Maddie Ganley made it 3-0 in the third, and with the Sabers pressing to get back into it, Knowles scored late to ice the win.

“We were hemmed in defensively a little bit, especially in that first period,” said Braley. “We were afraid to take the chances we were going to take. In the third, we started taking some chances with Clare (Woodford) who is our top scorer, and we drew some penalties.”

Woodford showed amazing courage, getting physically knocked around by Exeter, and she just kept coming back.

The late 5-on-3 advantage she sparked provided Souhegan’s best chance late, but with a bit of an open net, Alice Serbin was denied on the far side.

“But by the time we started that generation, it was a little too late,” added Braley.

Exeter, which took the regular season meeting between the two teams in overtime.

For Braley, it’s the second straight tough ending to the year. In the fall, her field hockey Sabers fell in the state finals.

One huge link between the two clubs, of course, is goalie Elle Byram, the senior who made 17 saves yesterday.

Riley Tobin, Alice Serbin and Julia Ireland are among the dual-hockey Sabers.

“I spend a lot of time with these girls, together every day at school, every chance we get, in the rink, outside of the rink, so these seniors, especially are huge, and there’s a lot of them,” said Braley. “This one definitely stings. It hurts. I have a lot of girls who have been with me two seasons, four years. This one stinks.

“We are who we are. I’m proud of how hard they worked. I back them, We worked hard getting here, and Exeter finished the job.”

There will be no raising of the title plaque in front of droves of fans for the Bishop Guertin High School girls ...

For many, especially the seniors, the high school boys and girls basketball seasons came to an abrupt halt this ...

The biggest fish in the smallish Division II South Conference pool is heading for the Seacoast and open water. ...

Titan-Sabers squad made some history

SALEM - It had to feel good for the Nashua North-Souhegan boys ice hockey team. You were the first team in this ...

Welcome to potentially the busiest sports month of the year. The maddening month of March. It’s got ...