Devotees of ‘the Buck’ now out of luck 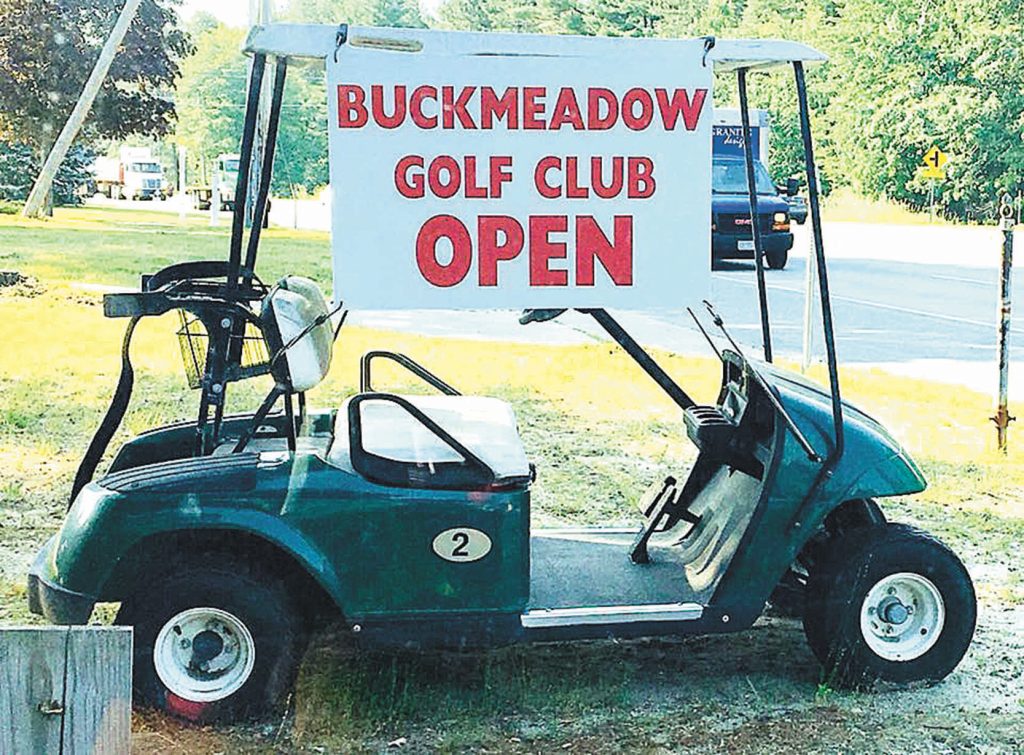 Facebook photo You always knew where to turn off Route 101 A to go into Buck Meadow with the tell-tale golf cart landmark.

Al Neville was looking out from his condo the other day and the expansive sea of green he was always fond of seeing, working, and playing on.

“I’m looking at it right now,” he said. “Just very blank. Just very green … It’s sad. I talked to the guy from the Amherst Recreation Department, they’re not going to do anything for a while.”

The area Neville, the former longtime Nashua High School and Nashua South defensive coordinator was talking about is none other than the 40 acres of heaven that was known as Buckmeadow Golf Club.

Unfortunately, it is no more, sold to the town of Amherst, which plans on converting it into a recreation area with athletic fields (mainly soccer).

The Buck was like no other course. A par 33 with doglegs galore – Par 4 on the first, third (although probably should’ve been a par 3), fourth, fifth, seventh, and ninth holes. The par 3’s were the second (probably the easiest hole on the course), the sixth and the uphill eighth.

This is a tough good-bye. While the Buck was a social setting for a lot of seniors and others from the local recreational golf community, it was also a great place to learn the game and just have fun.

For yours truly, for years it was a great spot to slip out in the evening, time it so it was possible to be the last person on the course. Play two balls a hole, as long as one could beat darkness, taking one’s time, the birds chirping. Often in the last few years, often between 7 and 8:30 p.m. you could have the course to yourself. Peaceful. And hey, mulligans galore. After all, who would you be holding up? You’d call it practice. Saturday evenings were always a good time after the heavy traffic was gone. Same for July 4, when many would be at barbecues and getting to their fireworks shows.

“It was a great course for people who weren’t serious golfers,” Neville said. “I decided a long time ago I wasn’t going to make the tour.”

But it was target golf. On the doglegs, you had to have a good drive to set you up for clear shots to the green.

You just had to be careful on crowded days not to make other players the target. The course was pretty compact, leading one work colleague years ago to call it a “shooing gallery.” But the course often forced you to hit it straight off the tee and judge your distance thereafter to the green. The greens weren’t PGA material, but hey, but they weren’t obstacle courses, either.

“Ohhhh noooo,” said Milford golf coach Bill Soubosky, a pretty accomplished golfer in his day, when he heard the news. “It was different, you had to adjust. You get players who all they care about is hitting it so far. There you didn’t have to hit it so far.

“It’s fun to play that way. Just play, play the game. You’re not going to win the Masters, just enjoy the game.”

And everybody enjoyed the Buck, especially Neville, who also worked there a few days a week during the season. Neville showed up one morning in the fall and wondered where the owner, Ken Young of Greenfield, a 1970 Milford grad, was, as he was around all the time. It turns out Young had fell ill and soon after unfortunately passed away. He and his late father Maurice had built Buck Meadow some 40 years ago and it opened in 1980.

But, in a familiar story, no one in the Young family wanted to keep The Buck. Ironically, those in the know will tell you Young had been trying to sell it anyway, and his family (officially owners M.E. Young, Inc.) eventually sold it to the town of Amherst for some $570,000 – about half of what Young had originally asked for when he first put it on the market a while ago, according to some.

Amherst officials are thrilled to get field space. The chairman of the Amherst Board of Selectmen, Peter Lyon, called the purchase “exciting” saying the the “project is unusual in that it is using recreation and conservation resources.”

Yeah, just great, Selectman Lyon. Tell that to the golfing community that cherished its time at The Buck. Sure, there are two other courses right nearby, Amherst Country Club and its smaller sister course Ponemah Green, but the Buck was special. Unique.

“A lot of people have been going there for years,” Neville said. “Weekend golfers, lot of times the same groups all the time.”

Neville said the toughest hole was the first, the 325-yard dogleg left par 4.

“First hole, hands down,” he said. “You had to make that long, straightaway drive and then get your next shot over the pond to the green.”

The easiest? “The ninth hole,” he said of another dogleg 340-yarder, in which another straight, fairly long tee shot was needed for a clear shot with woods on the right and marsh on the left. “I’d hit it over the trees.”

We disagree, the ninth was tough, but maybe by the time we got there it was close to dark and tough to see. But the first was always a challenge.

Favorite hole? Yours truly liked the slight dogleg right seventh hole, a 330-yard par 4 that the property owners on the left side had horses grazing over the fence. If you had a hook, you were in trouble. You’d finish the par 3 sixth, leave your bag in the middle of the seventh fairway and walk to the tee. Always with an extra ball in your pocket in case that first tee shot found horse manure.

“It was a course you could walk,” Neville said. “It was pretty challenging. Not as easy as people think it is.”

Granted, Buckmeadow likely wasn’t doing the business it had after the golf boom of the 1990s and early 2000s subsided. But it certainly still had its place in the hearts and minds of local golfers.

Who will forget that golf cart sitting out on Route 101-A to let golfers know this was the turn into the course? It’s gone now, and as you make the turn and head down the hill toward the parking lot and clubhouse, there are barriers and a no-trespassing sign. And, of course, no flagsticks in the greens, and there never will be again.

Sad. But we had to head over there to say good-bye. Of course, the course would still be closed now, anyway, as the pandemic has shut down most if not all golf courses. Tough, but temporary.

But this? The finality is tough. Our last hole? Three-putted for a bogey, just as darkness was settling in late last July.

But now the course has gone dark, for good.

Bye Buckmeadow. You were a great summer escape.

Tom King may be reached at 594-1251, tking@nashuatelegraph.com, or @Telegraph _TomK.

When ‘normal’ returns, let us be ready