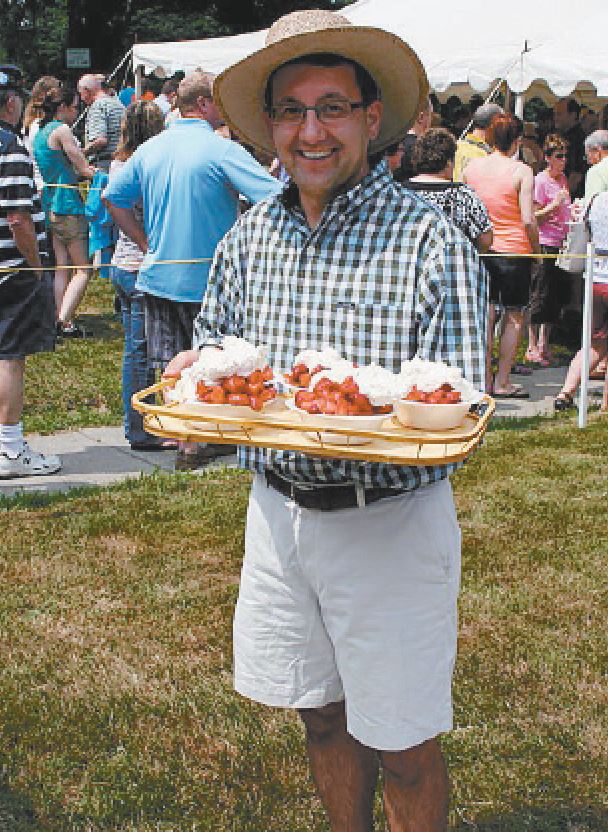 An attendee of a past Strawberry Festival loads up with strawberry delights. The Hollis Town Band will start its summer concert series with a performance at the festival on Sunday, June. 25. Courtesy photo

HOLLIS – The town’s band highlights the start of its summer concert series with a performance at the Hollis Strawberry Festival, from 2-4 p.m., on Sunday, June 25 at the town common. The rain location is the Hollis Brookline Middle School, 25 Main St.

The Strawberry Festival is a joint effort by the Hollis Woman’s Club and the Hollis Town Band Association. In addition to the concert, festival-goers can enjoy fresh strawberry shortcakes, strawberry sundaes and delicious ice cream from Doc Davis. There is no admission charge to attend and proceeds from the sale of food will benefit local charities.

The Hollis Town Band will be performing “An American Adventure,” composed by 18-year-old Mont Vernon resident, Jeff Henderson, who will be attending college in the fall to study music. Jeff’s compositions are performed locally as well as outside the New England area and the band is excited to showcase his piece.

Trumpet player Deb Waltz will be the featured soloist. She will be performing the “One Finger Polka,” by Harold L. Walters. The piece was written so it can be played with the soloist using only one finger.

Other musical highlights include, “Moorside March” by Holst, the grand march from “Aida” by Giuseppi Verdi, a unique march from John Philip Sousa, “The Quilting Party,” medleys of hits from the 1960s group the association and the 1980s group Journey, and a collection of music from Hollywood movies. In addition, the band will award the annual Hollis Town Band Schellenberg-Twichell-Jeynes Memorial Scholarship. The scholarship is given to band members, regardless of age, to assist in attending music school, music camp or college.

The band was founded in 1943 to provide Hollis area students with an opportunity to play in a band. Over the years, the band has provided community members with a venue to grow together musically while performing a wide variety of music. Currently the band includes over 70 members from 13 different towns in southern New Hampshire and northern Massachusetts. Members, who range in age from middle school to retirement age and all walks of life, gather weekly to rehearse in preparation for community concerts such as the one at the Strawberry Festival.