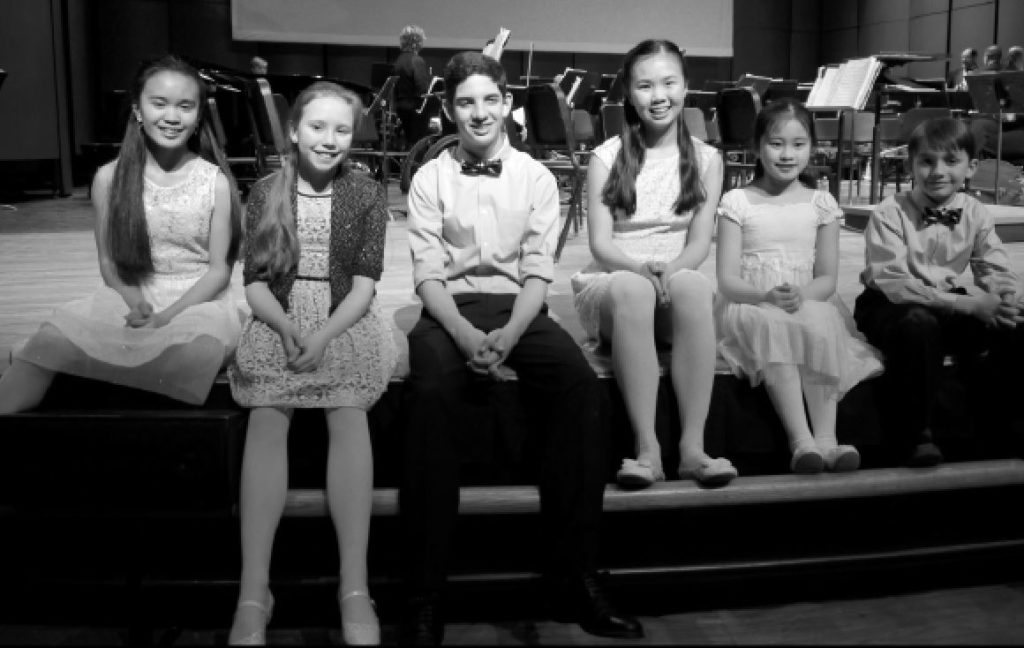 Courtesy photo Piano students of Mila Filatova are shown at a concert of the New Hampshire Philharmonic earlier this year. Pictured, from left, are Alessandra Mariano, 14, of Manchester; Anna Musteata, 12, of Hollis; Nathan Morrissey, 14, of Chelmsford, Mass.; Kedai Wei, 13, of Salem; Melinda Hu, 10, of Hollis; and Charlie Molten, 10, of Carlisle, Mass. They’ll be among the performers taking part in the Sempre Musick Concerto Project, a concert featuring young artists on Sunday, June 11 at 3 p.m. at Nashua High School South. Admission is free and the concert is open to the public

NASHUA – The future of classical music, and the talents of some of the area’s best young pianists, will be highlighted at an unusual concert in Nashua.

On Sunday, June 11, a total of 19 students of Mila Filatova’s Piano Academy will get to experience making music with a symphony orchestra.

The young pianists, aged 9-18, will each take the stage at Nashua High School South for a chance to perform classic and modern works for keyboard and orchestra.

The event, dubbed the Sempre Musick Concerto Project, begins at 3 p.m. in the auditorium of Nashua High School South, 36 Riverside Drive. The concert is free and open to the public, with donations accepted to help defray costs.

On the program: works by Mozart, Beethoven, Grieg, Saint Saens and many other composers from Baroque to contemporary, including a specially commissioned work by Robert Edward Smith.

The ensemble, known as the Sempre Musick Symphony Orchestra and led by Maestro David Feltner, was created to give music students the chance to experience performing in public with an ensemble.

“For many piano students, it’s no longer enough to play solo works in recital,” said Mila Filatova, founder of the Manchester-based Piano Academy that bears her name. “It’s important for them to make music that involves collaborating with other players. Not only is this exciting, but it opens up many new possibilities with the music that they study and learn.”

It’s not the first time that Filatova has arranged for her students to work with orchestras. In the past, they’ve performed with ensembles ranging from the New York Concerti Sinfonietta Orchestra to the Nashua Chamber Orchestra, which David Feltner also conducts.

Filatova created Sempre Music as an offshoot of her piano academy, and engaged Feltner to act as music director.

Filatova, who teaches students throughout southern New Hampshire, is an award-winning musician who was raised in Russia and came to the United States in 1999.