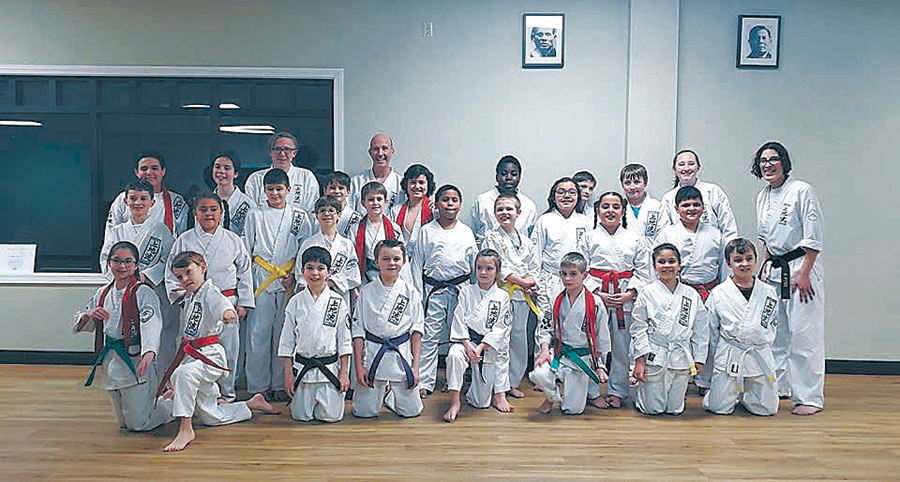 HOLLIS – For Neil Stone, teaching martial arts takes discipline and concentration. And as days turn into weeks with the COVID-19 crisis, reaching out to his students took some ingenuity and reinvention as he parlayed his classes into the virtual realm.

Students at Neil Stone’s Karate Academy at 22 Proctor Hill Rd. can now don their gis and continue their martial lessons with their ‘sensei’ in their homes through Zoom, the popular digital platform that allows multiple people to see and communicate with one another. Right now, he has 230 students participating.

“We had to assess things and get them up running quickly,” he said of the change in how the school offers instruction. “Obviously, we had to go remote, so we’re doing all of our classes virtually now. And we have modified our schedule a little bit, and it’s been quite successful.”

Stone’s wife Deb is teaching fitness classes, and he said that as a way of giving back to the community, they’re offering a free online class each Monday. Neil Stone added that he and his team are especially proud of their PACE program.

“It’s a martial arts class, but I think what separates us is that we are a private school,” he stated. “What we do is have a character development program. With PACE: Practicing Actions that Create Excellence, every month we have different themes and activities and things that we require our students to do.”

PACE was conceptualized by a student of Stone’s, who is graduating from Bishop Guertin in Nashua this year. She developed the program and fine-tuned it to the specific needs of the academy’s students.

With the PACE program, there are monthly worksheets that coincide with that particular theme, and they are broken down into age groups, 4-6 years of age, and 7-12 years of age.

Their worksheet is emailed to the students, who are expected to complete 10 out of 12 in a year’s time.

Stone also praises his wife, who helps parents navigate the road as students are learning everything – from reading to round-house kicks – at home.

“Deb is extremely talented as far as counseling and helping parents through the struggles that they may have with their children,” he said. “She does that constantly. She’s been on Zoom with parent after parent, answering questions and kind of helping them deal with certain behavioral issues that they may be experiencing with the kids at home.”

Stone’s karate academy is structured differently than other karate schools. All classes are recorded so students can go to the video library and take classes that way. The studio has also created themed game nights with activities – something to keep kids busy, while their parents take a much-needed break.

“Ordinarily, we would check in with schools, in order for kids to get promoted,” he said. “We send out sheets; we want to make sure their effort and their grades are up to par.”

The team at Stone’s school has worked very hard, he said, in transferring their lessons and messages to a virtual setting in order to allow students to continue their martial arts training.

“In our system, back a year or so, we promoted five people to seventh-degree black belts,” he explained. “That’s very high – it doesn’t normally happen. There aren’t a lot of places like ours that have that longevity. A lot of our students have been with me for 20 years or so.”

Stone began his teaching in Pepperell, before moving to Brookline and then to Hollis. Many of his students continued their training with Stone as he moved to new locations. He said he looks at his classes as a four-year program.

“It’s kind of like high school,” he said. “When you enter, you’re coming into your freshman year. In every year, there are certain standards that we want our students to adhere to in order for them to continue their training with us.”

Stone said that he and his team view the karate academy as the ‘Harvard of martial arts schools.’ He added that there is a standard that each student might uphold in order to continue their education at the academy -even through virtual teachings.