A look at the Lyndeborough Improvement Society 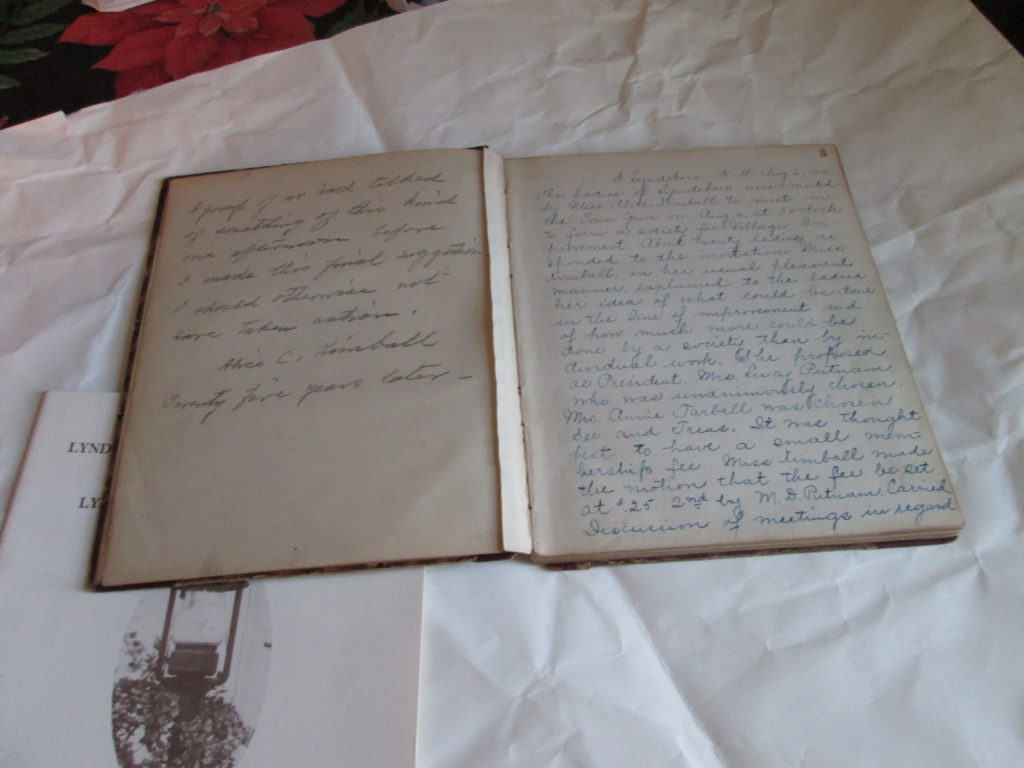 In 1935, Miss Alice Kimball, a summer resident of South Lyndeborough, penciled a note in the front of the ledger containing the minutes of The Village Improvement Society from its founding in August 1910 to 1915.

She wrote, “A group of us had talked of something of this kind one afternoon before I made the formal suggestion. I should otherwise not have taken action. Alice C. Kimball, twenty-five years later.”

The Society that Miss Kimball founded lasted for 90 years, disbanding the first week of August 2004. She died in 1948, but other ladies continued her vision as long as there was interest. In the end, there were only a half dozen left, and no young women wanted to join.

That book of minutes was rediscovered recently during the ongoing Historical Society inventory of their pictures and papers.

There were originally 20 members, with Lucy Putnam as president and Addie Tarbell as secretary. The membership fee was set at 25 cents.

The Society published a booklet in 1985, the 75th anniversary of the Society. The cover of the book is a picture of a kerosene lantern, one of the 26 purchased to light South Lyndeborough streets in 1912, one the Society’s first projects. The lamps cost $3.08 each, plus another 60 cents for the posts. They were installed by volunteers. The town hired a lamp-lighter.

In 1957, they changed its name and broadened its scope to Lyndeborough Improvement Society.

The Society’s lasting legacy is the Village Common. In 1914, the ladies decided that the space in front of the railroad station, which they termed “The Square,” was unsightly and, since it was the first view visitors had of the village, it should be improved. In September, 16 men with horses, wheelbarrows and tools answered their call, and the area was graded and landscaped.

Over the years, the women planted flowers and lilac bushes, bought a flagpole, a fence and benches and assisted with Christmas tree lightings.

In 2014, on its 100th anniversary, the common was rededicated after several years of restoration by a group of volunteers. Some of the old lilacs were discovered in 2012 and are blooming again.

The Society purchased veterans’ memorials for both World War I, 1926, and World War II/ Korea in 1963. The memorials were moved to the common during renovations at the library, and are the focus of the common.

“The Grove” was one of their main interests. It was a stand of large pine trees around a small pond located at the end of present-day Grove Street. The Society had the area cleaned and a platform erected. Town, school and church events were held there, and the pond used for ice skating. The grove was destroyed by the hurricane in 1938, and the area was abandoned.

In 1928, they purchased fire extinguishers for the Citizens’ Hall, and in 1973, they paid $1,200 toward extending water to the library. The library always was one of their main projects. They paid the electricity bills as long as they existed, donated toward new books, helped pay for the new furnace and install a septic tank. In the end, their treasury went there.

Citizens’ Hall benefited with, among many other things, kitchen appliances, voting booth curtains and a clock.

In 1927, they published a cookbook. A few copies still are around town.

In 1928, signs “Town of Friendly neighbors” were installed on Route31.Those signs were removed in the early 1960s. The Heritage Commission is considering replacing them.

Improvement societies existed in most small towns, and most of them have disappeared for lack of participation. The tradition continues in a small way in Lyndeborough through the Common Committee, a totally volunteer, no-expense-to-the-town effort by a handful of residents.