The story of pie 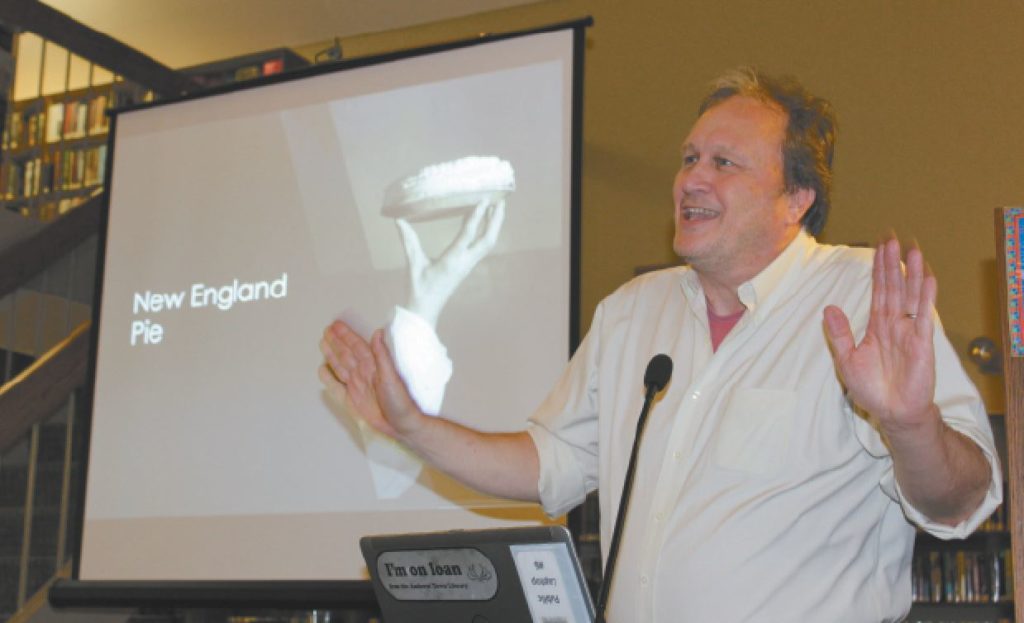 Robert Cox engaged in a lively back and forth with his audience at the Amherst Town Library Oct. 5. Cox is the author of ‘New England Pie: History Under a Crust.’

AMHERST – Pies in nearly every variety – apple, blueberry, cherry, pumpkin, pecan, strawberry-rhubarb, custard, peach, cherry and cranberry – were sliced up and served to an audience at the Amherst Town Library, whose appetites had been whetted by the evening program.

But none of them were authentic New England pies, according to Robert Cox, author of “New England Pie: History Under a Crust.” Cox gave an entertaining slide show Oct. 5, alternating pictures of pies with those of his cat, Margaret.

He is not a cook and is originally from California, so he spent a bit of time defending his right to hold forth on New England cuisine.

As head of special collections and university archives at UMass Amherst, he specializes in the history of social change and the histories of New England, including the history of food in our region.

“Food is the best way” to get at the heart of a culture, he said, and asked what is the quintessential New England pie.

Many in the packed audience said apple, but apple pies are also traditional in Washington State and Michigan.

Most of the pumpkins we use in pie come from Illinois, so pumpkin can not be called an authentic New England pie. That leaves squash and lobster pie, said Cox, reminding people that non-sweet pies are pies too.

“In New England we’ve keep a balance between sweet and savory,” he said. “In the South, there is nothing that is not sweet. All they eat is sugar on sugar.”

The best part of any pie, at least for Cox and for most pie-lovers, is the crust.

But it didn’t start out that way.

“If I asked that question in the 1700s, nobody would say crust,” he said, because for the earliest pies the crust was just a surrogate pot made of flour, water and salt, put in the over and “baked and baked. The filling ingredients melded together, but the crust ended up “not fit for anyone but pigs, dogs, children and servants.”

Eventually someone discovered that if you added a little fat, especially lard, the crust would develop flaky and light layers.

What about Boston cream pie? It may be Massachusetts’s official state pie, but it’s really a cake, and “an affront to pies,” introduced to Boston’s Parker House by a French chef and becoming one of the hotel’s marketing tools.

Which leaves maple-walnut, which combines the classic fall flavors of New England. Served only in New England, and hard to find, Cox said, it’s less obnoxiously sweet than pecan pie.

Cox talked about the pie traditions of his wife’s French-Canadian family, especially tourtiere, a pie filled with pork, beef, onions, garlic and spices.

A lot of what we call “pie” is not pie, he said. Shepherd pie is not a pie – it has no crust – but a place “where leftovers go to die under mashed potatoes.”

Another false pie, also denounced as “evil things” are woopie pies, the official state treat of Maine, though Maine’s offiicial pie is, of course, blueberry.

Ritz Crackers’ mock apple pie, sometimes called “chemical pie” because the taste depends on a chemical reaction, is made with the buttery crackers, sugar, cream of tartar and cinnamon substitute for apple. The recipe has long been on the back of the Ritz box, and in blind taste tests people have a hard time distinquishing the cracker pie from the fruit pie, he said.

Years ago, when apples weren’t available in late spring and summer, home cooks “had to do something for their families who loved apple pie.”

Mock cherry pie was created out of cranberries and raisins, instead of expensive and seasonal cherries. Cranberries in New England were “super-abundant and super cheap,” Cox said, and that puts mock cherry pie in the category of an authentic regional pie.

“Take something you have at hand and craft it into something your family loves. That makes it a real New England pie.”

‘New England Pie’ is part of a library series called Quintessential New England. Next in the series is a program on New Hampshire’s one-room rural schools, by Steve Taylor.