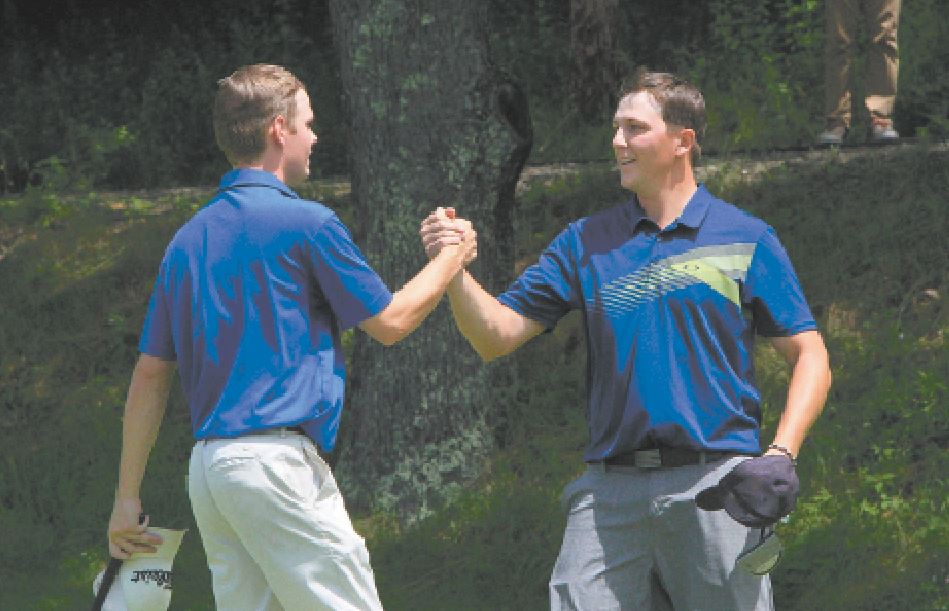 KEENE – It wasn’t easy, but making history rarely is.

The triumph marks Martel’s second championship in five years, as the 24-year-old New Ipswich resident also won at Golf Club of New England in 2013. He’s the second golfer to earn multiple State Am crowns since the turn of the century, joining Joe Leavitt (2012 and 2014).

“The second one is maybe a bit sweeter,” Martel said, “because I know it’s pretty rarified air to have two.”

Martel, the No. 10 seed, went back and forth with top-seeded Paradis during the brunt of the front nine. Paradis – a Southern New Hampshire University standout who also settled for runner-up honors in 2016 – was 1 up through 11 holes, but Martel turned the tables by dropping in birdies on five of the next six and was 4 up at the 18-hole intermission.

“I can get on runs for sure. I had been hitting good drives, and I had good numbers to the pins,” Martel said. “I was hitting good shots, and a lot of close birdie putts.”

Martel maintained a cushion throughout the following nine and a three-putt from Paradis on the 28th put the Nashua CC member 5 up with eight holes to play.

The cushion dissipated in a hurry, though, as Paradis birdied the 30th before back-to-back Martel bogeys suddenly put the Concord CC member down two with four holes to go.

Paradis continued to apply pressure with a birdie on the 33rd, but Martel stopped the bleeding and rolled in a short birdie putt of his own.

“I expected Matt, 100 percent, to make the putt he had. I knew I had to make it before his went in,” Martel said. “It was quite an easy putt. It was just on the right edge, I hit a good one and it went in.”

The pair halved the next two and Paradis ran out of time.

“I never lost hope, really. Anything could happen. He gave me a couple of shots coming down the stretch and I was able to roll in a few,” Paradis said. “The big turning point was, I think, down there on 15 (33rd hole of match) when he answered my birdie putt. He got it done.”

It was a bittersweet day for Paradis, who was humbled to reach the final for a second straight year.

“It’s an honor just to get here,” Paradis said. “There’s so many tough matches you have to get through throughout the week just to get here. I’m happy I made it, but I’m just frustrated I couldn’t get it done.”

Martel has little doubt the 21-year-old will be back again.

“He’s a phenomenal player. It’s only a matter of time before he wins one,” Martel said. “You keep putting yourself there and eventually you’re going to break through. I had to play some damn good golf to beat him, no doubt, and I knew I would have to. I came in and I was focused and I had a good mindset.”

The execution on the course led to a memorable day for Martel. He was a former member at Bretwood GC, and his brother, Luke, caddied the final three days. He had numerous fans in the gallery, including his parents, siblings, girlfriend and some close friends.

Moments after he clinched history, a few of his clearly confident supporters surprised him with a banner that read: Mike Martel, NH State Amateur Champion with 2013 and 2017 in the corners.

“I’m glad I didn’t see that before I won,” he said with a chuckle.

The future is bright for Martel, who might follow in 2016 State Am champion Chris Houston’s footsteps and test his game at the next level.

“Maybe I’ll take the jump to professional in September,” Martel said. “I have a lot of stuff to think about, but it’s pretty cool to have two of them.”