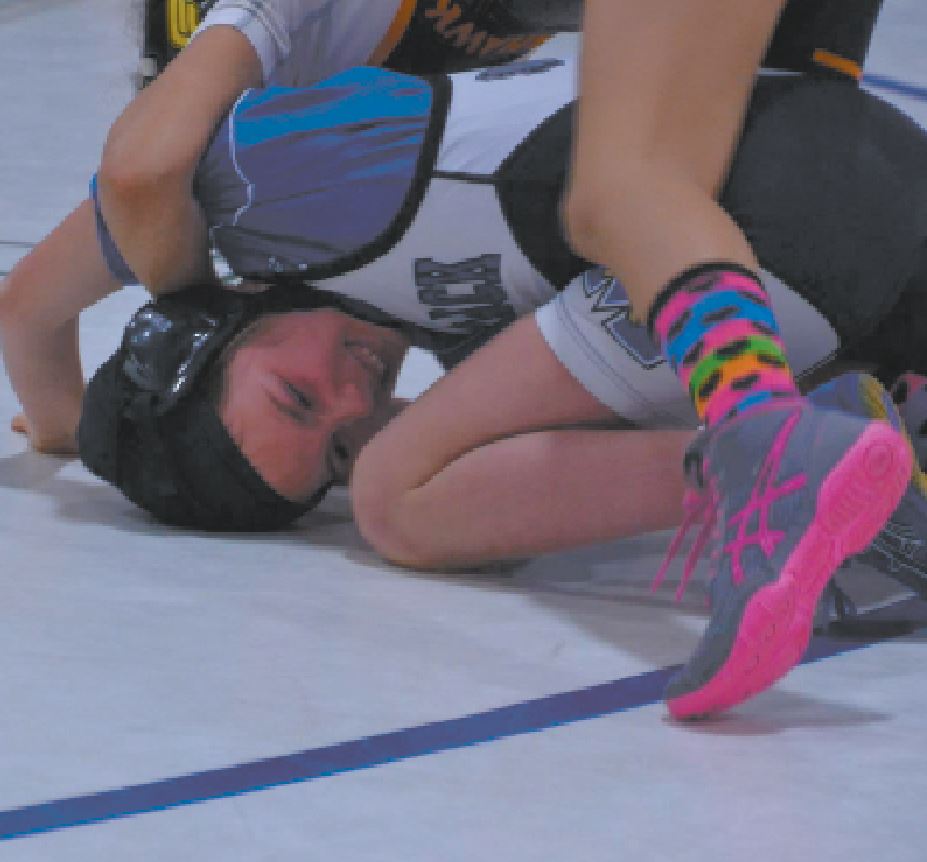 Emmi Haddad tries to get off the mat during a recent match at Pinkerton.

Both tournaments served as an Ohio Tournament of Champions Qualifier and Gene Mills Eastern Nationals Qualifier for those who placed.

As a result this postseason tournament is notoriously challenging attracting wrestlers from all over New England as well as Pennsylvania, New York and New Jersey. Merrimack as a team finished 9th in the K-4 division out of 46 teams. Merrimack brought 17 wrestlers to compete with individual results below:

Kindergartners Natasha Koudriashov and Olivia Dine fought hard in the Wonder Women Classic and Andrew Schuster in the 44-pound bracket in the Rebel Classic.

Emmi Haddad, grade 2, grabbed one win by points in the all-girls tournament.

Second graders, Kael McAloon and Ben Koudriashov each grabbed fourth place on the podium with one win by pin for both wrestlers.

Cayden Dine and Jackson Meehan, grade 3, took home fourth and third place, respectively. Dine had two wins by points and Meehan completed two wins by pin and one by points.

Ivey Johnson, grade 4, capped off a stellar season taking home the champ title in the Wonder Women Classic and third place in the Rebel Classic. She pinned her way through to first in the all-girls tournament. And, completed another two pins and one win by commanding points in the Rebel Classic. She has grown into a great leader and example for our increasing female representation on the team.

Hunter Adams, grade 7, also put up a tough fight in the 88-pound bracket.

The Merrimack Youth Wrestling Program is part of the Merrimack Youth Association. It strives to provide a safe recreational activity for Merrimack children in grades K-8. The program promotes the sport of wrestling, the world’s oldest sport, by providing a safe practice environment, by delivering high quality instruction, and by facilitating tournament competition opportunities. The Program is in its 12th season and currently has 46 wrestlers on its roster.