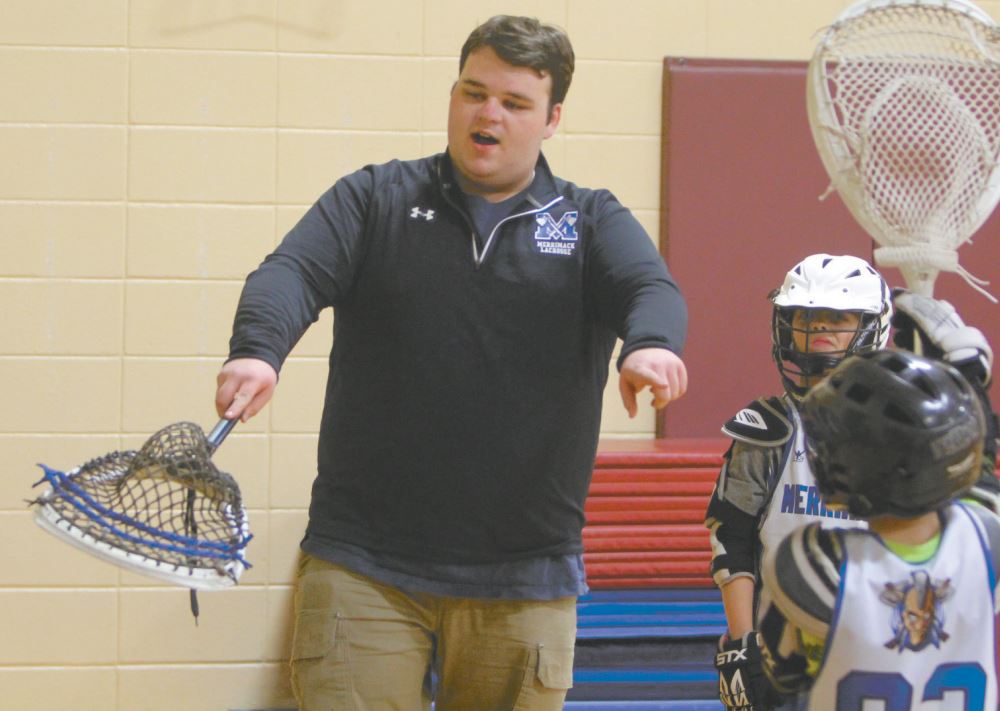 MERRIMACK – One of the youth lacrosse players was wide-eyed after an instructional session with Alex Annutto.

“Wow,” he said to Merrimack High School coach Brian Miller. “Is he a professional lacrosse player?”

No, but he wants to coach lacrosse someday as a profession.

That would be a perfect way for Annutto, a senior at Merrimack High School, to turn a negative into a great positive. You see, Annutto was supposed to be the Tomahawks starting goaltender this spring for the second straight season, but a car crash caused by a deer in late August has basically ended his playing career after he suffered a severe concussion. He simply can’t risk the game’s contact or any blow to the head, doctors have told him.

Thus, instead, he’s turned to coaching to get his lacrosse fix after eight years playing the game.

“I haven’t touched my stick since (the crash),” he said. “(Playing lacrosse) is what I did. I just have to find something new.”

And that new thing is coaching.

“We had talked about doing this sort of thing the minute we found out he wasn’t going to play,” Miller, the varsity head coach, said. “I think that just speaks to (Alex and his family), how much they want to give back. Not every senior wants to stay involved like that.”

Annutto plans on going through USA Lacrosse and getting an actual coaching certificate; that would entail taking classes in Exeter. Thus right now he’s working at Merrimack Youth Association clinics that are held, indoors for now, once or twice a week. Even before the accident, Annutto worked with the incoming freshman goalie at MHS. He actually had coaching on his future plans list prior to the accident.

Well, suddenly the future is now.

“It’s fun; it’s kind of the flip side of the coin, I guess,” he said. “Thankfully I’ve had a lot of opportunities to get a very broad spectrum of coaching in general. I’ve kind of learned a lot and trying to take my favorite drills and exercises and try to teach (the youths) that.”

What’s the one thing a goalie needs to know?

“How to communicate and rally the team behind you,” he said. “And not let the energy die. I just tell them that communication is important, don’t be afraid to get loud.”

Annutto will go over stick work, positioning, ground ball drills, and has the youths’ full attention. “And how a goalie is not only the last line of defense but the first guy on offense (with the outlet pass).” Annutto has the right demeanor, it seems, for coaching.

“Alex has always been a pretty calm guy,” Miller said. “As a goalie, you’ve got to be a little louder. … Alex can be loud, and be assertive like that.

“We’re early in it; just a couple of practices for him. But he’s got the right demeanor to work with kids, so I’m sure that will develop over time.”

Miller said he hopes Annutto will work with the youths about twice a week, on a more regular basis once everything moves outdoors.

“I’m sure they’ll love him,” Miller said. “He’s got the people skills for sure.”

Annutto actually went to a Tomahawk offseason lacrosse meeting or two in the fall, but Miller could see he wasn’t quite right. Then by the holidays Annutto announced he couldn’t play.

“It wasn’t immediate, it was something I found out in a month or two span after meeting with several doctors,” Annutto said.

Little did he know his lacrosse life would end the day before his senior year started at Merrimack. On Aug. 31, on the trip back home from an excursion to Six Flags in the Springfield, Mass., area, the car Annutto was in, being driven by a friend’s father, struck a deer in the road. Annutto was in the back seat, seat belt on, and suffered a swollen face, black eye, broken nose, sheared teeth and a severe concussion. Lacrosse ended up being an unforeseen casualty.

Invested in the sport

Alex Annutto first got into lacrosse around middle school age when his parents wanted him to get involved in a sport. He want to a camp with a friend, and became hooked. He became a goalie, he says, “because my team needed one. It’s invigorating, it’s awesome. You have it all on the line, I guess. You make a big save or just a key save in general, it’s great.”

He not only has played at the high school, but Annutto had taken part in all the offseason programs and teams that a serious lacrosse player would be involved in – Granite State Warriors, New England Elite, Four Leaf Lacrosse, etc. He’s played in tournaments at several colleges around New England but also as far away as Lake Placid, N.Y.; Charleston, S.C.; and Austin, Texas. A scheduled trip to a tourney in Santa Barbara, Calif., had to be canceled due to his injuries.

“Alex had a great year last year,” Miller said. “He had a great offseason, he had put in a lot of work. He’s flown around the country to get into different tournaments, get recruited, and just improve his game. … The guys feel for him. … Alex made a big connection with some of our younger players last year. He’s always making connections with kids. He has that knack.”

And that’s part of the reason that midway through the school year, Alex’s father got him thinking that perhaps coaching at the youth level would be a way of helping him stay involved. He won’t be playing the sport in college, although several schools were interested during his junior year.

Academic were always a focus, too. Annutto, whose classes at Merrimack have been modified this year due to the injuries, may go to college part time next year to slowly make the adjustment back to a full class load. He’s just begun applying to schools, having to wait a bit until his health improved. He’s not exactly going to major in basket weaving; he plans on studying either mechanical engineering or bio technology.

And stay involved in lacrosse. Miller says that having the high school players work with the youths is important for the Tomahawk program, and Annutto is helping to pave the way for that.

“It’s all about making connections with kids and that’s what draws them back to the program,” Miller said. “They look up to these high school kids in a big way.”

As Annutto once did, and now he hopes someday to coach on the level he played.

“I would love to work my way up to high school,” Annutto said.

For now, he will offer his time when he can; he can’t be a full-fledged head coach or assistant even at the youth level without a certificate. That shouldn’t be difficult for him to obtain, as he feels he’s hitting home with the youths.

“I kind of notice that they are trying to learn,” he said. “I know the trouble of making the same mistake over and over, and I bring that out.”

He’s only been to the youth practices, but not high school practice. But Annutto plans on going to every Merrimack varsity game.

“I think I’ll be happy to see my team playing, my friends I’ve grown up playing with,” he said. “And see it from a different perspective.”

From, one would think, the coaching perspective. For Alex Annutto, a life-changing accident may take the player away from playing lacrosse, but it won’t take the love of lacrosse away from the player.