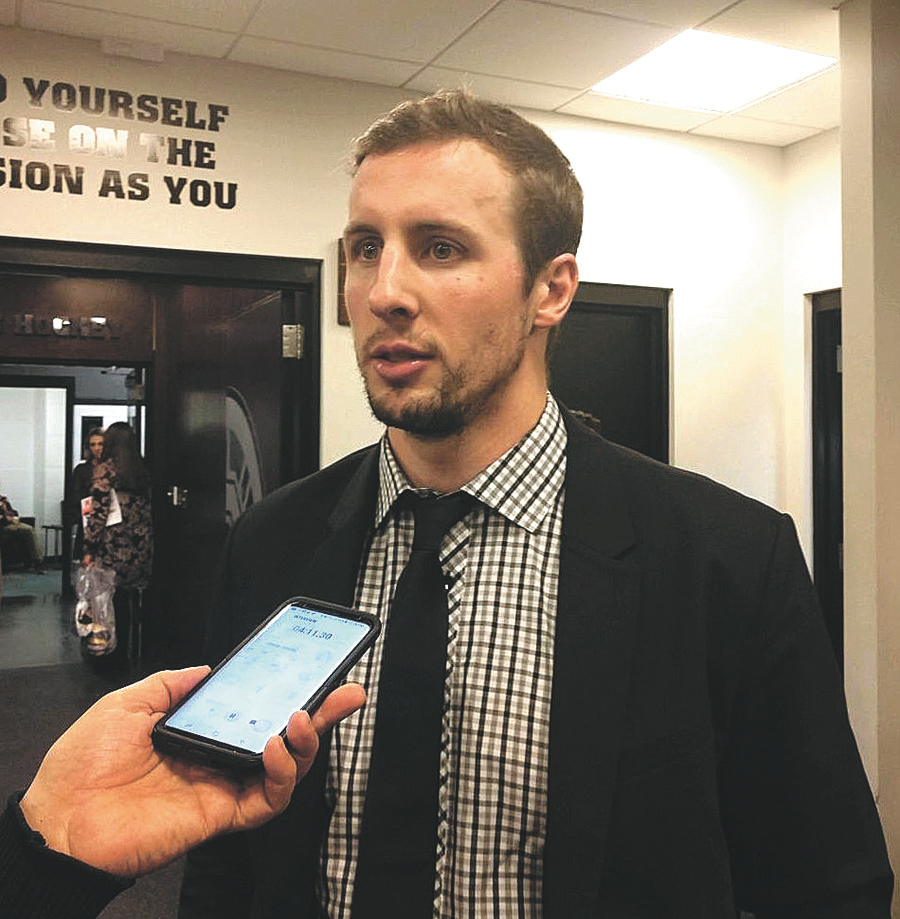 Courtesy photo by Chris Hurley Merrimack's Tim Schaller talks about his role in Saturday night's 7-3 Bruins win in Game 2 of the Stanley Cup playoff first round series with Toronto.

It was his second altercation of the game, as he also had taken on Tornonto’s Kasperi Kapanen after the Maple Leaf had taken a whack at Bruins goalie Tuuka Rask during a quick flurry. The refs intereceded quickly in that one.

Now what would Schaller’s mom Susan say about all this?

“She was probably covering her eyes a little bit,” Schaller said with a grin. “She’s kind of used to it right now, so she’s all right.”

But that’s part of Schaller’s job, and he did it pretty well.

If the Leafs had half the jump, especially at the start, that Schaller had the other night, they might be in better shape. All the excitement on Saturday – and deservedly so- was about David Pastrnak’s incredible play and his hat trick, but Schaller certainly set the tone for the game with his incredible jump and puck pursuit.

He’s clearly made for coach Bruce Cassidy’s up-tempo style, showing that a fourth line forward doesn’t have to be a plodding grinder, he can be a fast grinder too.

It’s been good all year for the local guy, playing in his second season for the team he worshipped growing up in Merrimack and progressing the entire time.

“I think I have a lot more confidence,” Schaller said. “I think I know my role more. I’ve learned over the years what my role is going to be and what it’s going to dictate at this level. I’ve taken that and run with it, and it showed (on Saturday).”

We’ve said it before; these Cup playoffs could be a pretty good Bruins story. Right now they and Tampa are each two wins away from a collision course in the conference semis, and you wouldn’t want to poke the Bear here.

“The confidence we have in the room is awesome,” Schaller said. “It’s not cockiness,it’s just a confidence that you believe in the guy next to you.

We’ve had that through the entire year. We’re clicking right now, so it’s going well.”

Almost too well. As Bruin Tori Krug said, “This game’s over. You think about your last game, and you can be in trouble.”

Not if this team sticks to the scripe that little things lead to big things. Example: Schaller takes off after Toronto’s Mitchell Marner, gets a hit on him, and that baits Hainsey into going after the former Tomahawk, Providence Friar and Buffalo Sabre. Schaller gets two minutes for roughing, Hainsey gets four, and the Bruins score on the power play.

“I hit one of their top guys, which I saw was him, so I tried to speed up a little bit,” Schaller said. “Hainsey was doing his job getting in there, I would have done the same thing if someone were to hit one of our guys. I was ready to go, and he was doing his job, I was doing my job.”

Keep an eye on Schaller throughout the playoffs. We keep telling you he makes good things happen, and don’t forget he can use his effort to score goals. The Bruins’ top line of Pastrnack, Patrice Bergeron and Brad Marchand is the talk of the NHL right now, but the B’s have others, including Schaller who can put the puck in the net in these playoffs.

“Tim Schaller plays on our fourth line, and he has 12 goals with no power play time,” Cassidy said late Saturday night. “So it’s in the room. I’m not surprised we’re getting secondary scoring.”

Schaller would love to be part of that in these Stanley Cup Playoffs.

“I got one last year,” he said of that one-and-done playoff series vs. Ottawa. “I got my goal tally (NHL career high 12) in the regular season, so I’d like to do it in the playoffs as well.”

We’ll see what happens, because the playoff road is littered with teams that look fantastic in taking 2-0 series leads only to falter. The Leafs, though, look like they need to make major adjustments to cut down on all the space the B’s forwards are getting. Maybe showing up might help.

“We’re having a lot of fun,” Schaller said. “With the goals we’re scoring, you still have to stick to the game plan, still play the same way not matter what the score is. I think we have the right mindset, the right leadership to keep us in the right direction.”

You can open your eyes now, Susan Schaller. You may not want to miss what else this Tim Schaller guy may do as these playoffs progress.