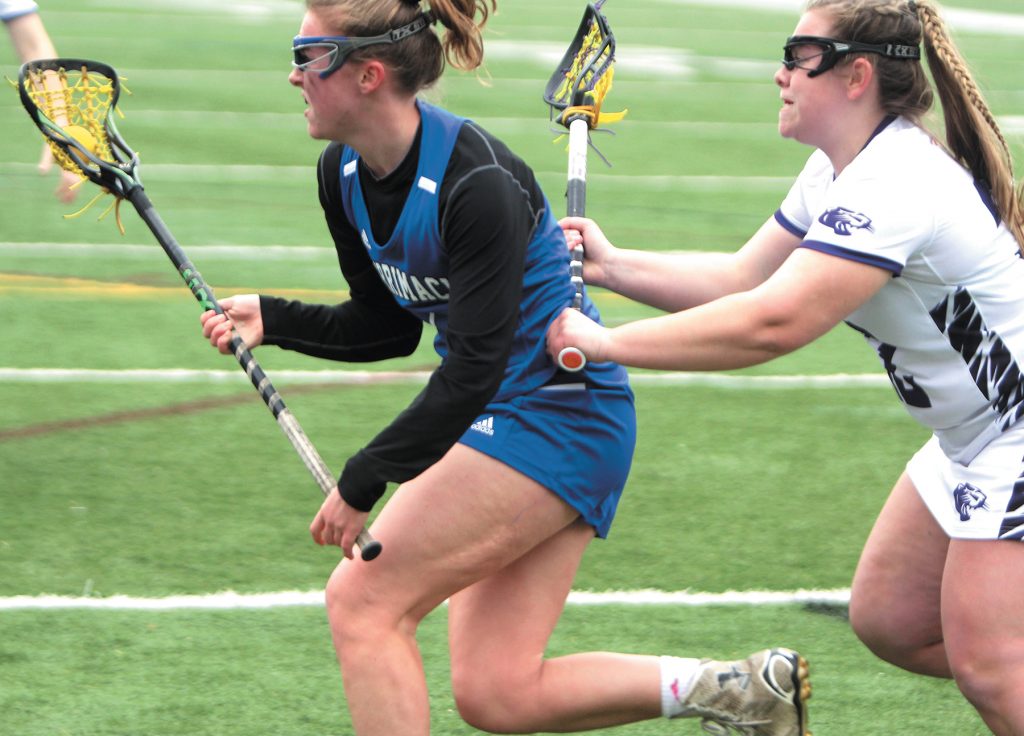 NASHUA – After a tough opening loss at Exeter, the Merrimack High girls lacrosse team responded with back-to-back wins, first over Nashua South and most recently, 11-6, over Nashua North.

The win over South was a huge confidence-builder for the youthful Tomahawks.

Merrimack’s Melanie Hutchinson more or less followed the art of the deal with her free shot in overtime Friday against South.

“I was just thinking fake high, shoot low,” Hutchinson said after she scored just 1:03 into sudden death overtime to give the Tomahawks a dramatic 8-7 win at Stellos Stadium. “Try to the get the goalie’s off-stick. If it’s not there, pass it to a teammate, hopefully they’ll get it. It was a really hard fought game for South. We played good, it was

“She can take control,” Merrimack coach Sarah Rothhaus said of her junior midfielder. “She’s got the speed, she’s got the skills. You can just count on her.”

Hutchinson led the 1-1 ‘Hawks with four goals, including one just five seconds into the game. She also got the game-tying goal on a similar restart with 1:40 left in regulation. The Panthers, meanwhile, just missed a chance to perhaps win it when Kirsten McIntire’s blistering shot hit the post next to Tomahawks goalie Bella Beaton, (11 stops) who, like South netminder Abby Rowe (10 saves) was tough when she had to be.

“We had so many good chances,” South coack Ciki McIntire said, letting out a long groan. “I’m just so proud of the way they played and kept fighting. It was back and forth.”

McIntire finished with a hat trick, while Olivia Johnson had a pair of goals and single tallies were by Sarah Signorello and Liz

South led 4-3 at halftime when McIntire scored on a free shot with 0.4 seconds left. The Panthers trailed 6-5 until Olivia Johnson scored with 11:52 to play and converted a pretty feed from Signorello exactly five minutes later to give the Panthers their last lead, 7-6.

Amber Brewster had two goals to help the ‘Hawks, while Megan Dinsmore and Page Letoile had singles.

When OT began, Merrimack got possession, but the teams took turns turning it over.

Hutchinson then gained control and was fouled.

“So many things led up to that last shot,” McIntire the coach said. We just couldn’t take care of the ball in the end.”

But the ‘Hawks couldn’t have had the ball in better hands at the end.

“Mel is the one you can count on,” said Rothhaus, who also lauded the defense of Erin Ortega. “We had that set up before. She knew what we wanted her to get done, and she did it.”