BG slips past Bedford for crown 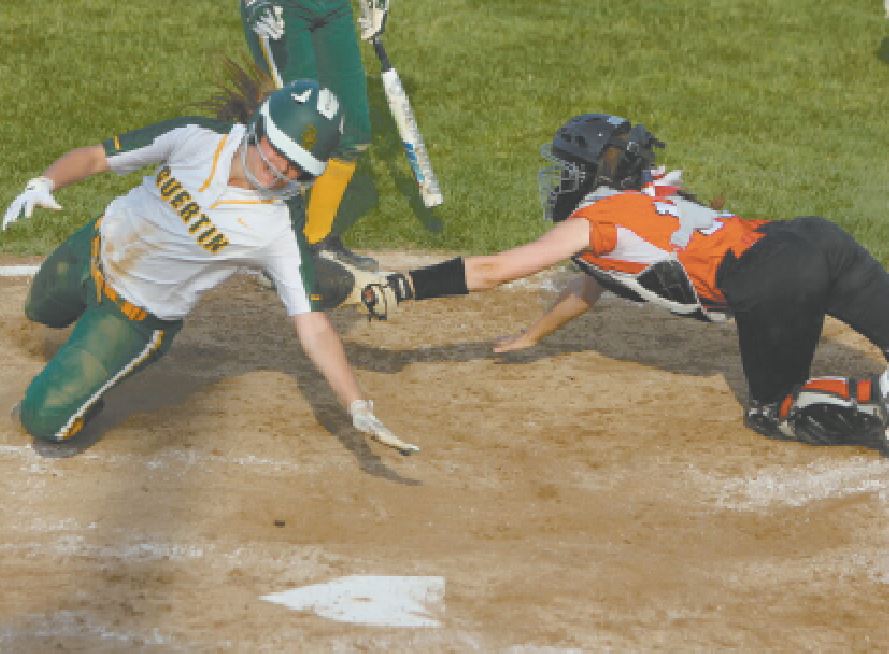 Photo by TOM KING Bedford catcher Kylie Dimond just gets the tag on Bishop Guertin’s Neysa Ouellette to prevent the winning run from scoring in the bottom of the seventh of Saturday’s Division I title game. The Cards, however, scored two plays later to rallly past Bedford, 2-1, at SNHU.

And score she did. Ross’s run capped a two-run rally in the bottom of the seventh that turned the Cards from a possible runnerup to a Division I champion with a 2-1 win Saturday at Southern New Hampshire University.

Ross had doubled with two outs and nobody on after the No. 3 Cards (17-4) had already tied the game on an error by Bedford. But the Bulldogs, who thwarted Guertin’s first chance at plating the winning run when BG’s Neysa Ouellette was thrown out at the plate, had one more mistake waiting.

With Ross on second and two out, Rachel Marion hit a slow grounder to second base. The throw sailed over first, and Ross crossed the plate and turned to her dugout in triumph. This is BG’s first softball title.

“It was a great game between two great teams,” Guertin coach Nicole Adamson said. “We faced them twice during the regular season, so we knew they were going to be a tough team and they were. But we were able to capitalize.”

It’s the second time in a week the Cards were an out away from elimination. The previous Saturday they rallied to beat Alvirne in the seventh in to advance to the semis.

“These girls, they dig deep every time. They’ve done it all season. I knew they could, and they believed.”

“I really thought we were going to go to extras,” said Bedford coach Jay Brewster, his ninth seeded team finishing at 13-9. “It came down to we made a couple of mistakes, and that happens.”

Soraghan was tough, getting all of her six strikeouts in a row early on. She only allowed three hits, walking three.

The Bulldogs looked like they had a golden opportunity in the fourth, but Jacquelyn Harrington got caught off third on a bunt play after doubling to lead off the frame.

But they finally solved Soraghan somewhat in the sixth. Harrington walked with one out, Erica Barley singled and a fielder’s choice loaded the bases. Harrington scored on Caitlin Fletcher’s ground out to third.

In the bottom of the seventh, Bedford pitcher Katherine Martin plunked Soraghan and Ouellette blooped a single with none out to start the rally. Soraghan scored on the first Bulldog error.

“Bridget was great all day,” Adamson said. “She did her job, and she knew she had the confidence of the team behind her, that helps.”

“I could do this all day,” she said. “I just love this environment.”

Especially when there’s hardware to hold up.

Off the beaten paths of Acadia National Park