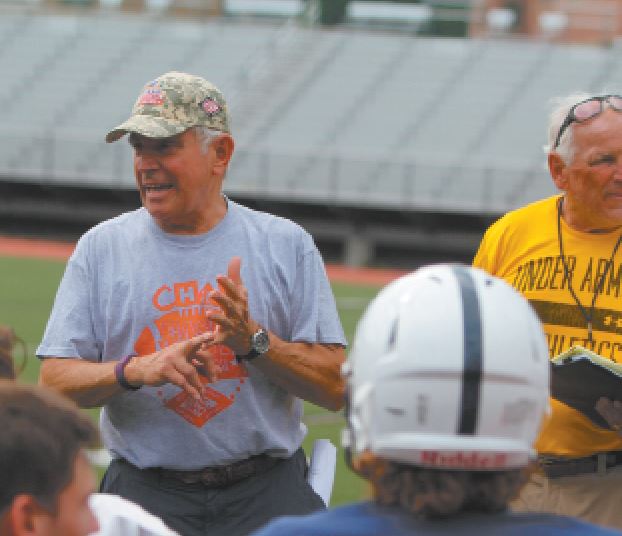 They’re good-ol’, old-time football coaches that really go together in all kinds of weather.

Make no mistake about it, the two guys running the West CHaD All-Star football team are doing things their way – the old-fashioned way.

We miss former Milford coach Paul Lavigne and former Manchester Central coach Jim Schubert during the regular season. They had their unique view of football, and were both highly successful.

But a game like the CHaD East-West All-Star game brings these two guys together, and there’s no doubt the players can learn from them as they either finish their football careers or continue on in college.

“Now, what did I just say?” Schubert asked a player during his explanation of an offensive set the other day. The player repeated it back verbatum. Otherwise, he’d probably still be running.

After Schubert gave his opening address to the players on the field at Bedford High School’s Bulldog Stadium, in stepped Lavigne with a few words.

He talked about how the East team, practicing at Manchester Memorial, had all the advantages of a locker room, meeting room, training room all right next to each other. His was the “We shall overcome” speech.

“I do it for the hat,” Lavigne said. “I do it because they give me a free hat every year.”

Hey, you can never have enough free hats.

“I do it because I love the doggone sport,” he continued. “It’s been part of my life ever since the fifth grade. And as a coach for the last 40-some-odd years. If I ever stop coaching, I think I might stop everything, you know?”

Addicted, and that’s a good addiction. Right now, this is the only coaching Lavigne, who lives the comfortable life – well deserved – in Meredith, does.

“I love this so much, my wife gets mad because I take this part-time job and make it a full-time job,” he said. “But I’m glad I’m doing it.”

Of course he is, it keeps Lavigne connected with the sport. But now in his early 70s, like Schubert, he’d make a great assistant or consultant somewhere.

Schubert treks from his beach home in Hampton every day this weeklong stretch, and he has the tan to prove it. Man, we all should be retired football coaches, right?

Make no mistake, they’re head coaches 1 and 1A. Schubert was involved in the administration for the East team in 2012, was the West head coach in 2013 (his first time since 2005).

“I was all anxious, maybe I forgot how to coach,” Schubert said. “But once you get on this field, see these kids, it all comes back.”

Lavigne was the head coach again last year but didn’t want to be the head man this year. So he called his old buddy Schubert, and Schubert said, “Well, why don’t you be the defensive coordinator again?”

You have to love it when a plan comes together, right?

In any event, these two are coaches who are meant to be coaching, still as they ease into retirement.

The East may have the convenient facilities and all the modern ammenities.

But the West has Schubert and Lavigne. You figure out where the true advantage lies.

Off the beaten paths of Acadia National Park