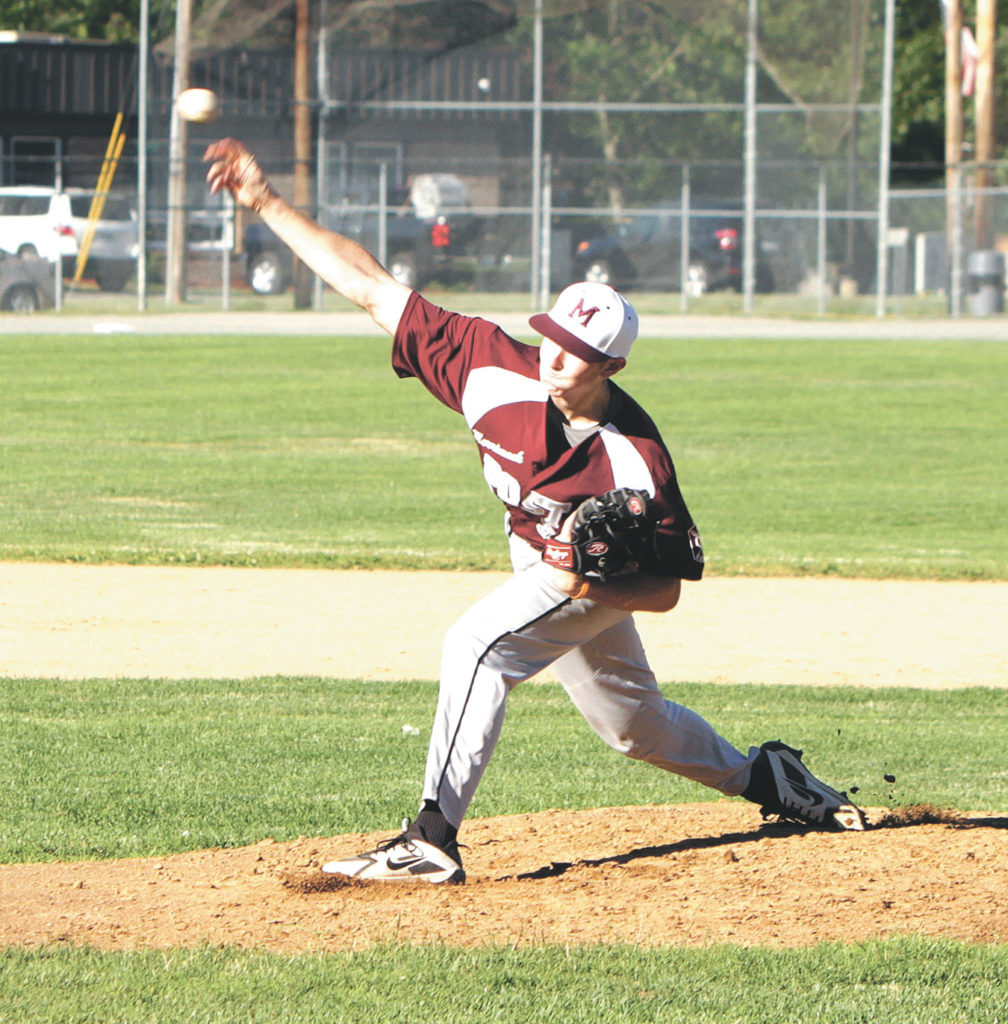 MERRIMACK ­- At a time where the old-school standby of American Legion baseball has lost its luster around the state and even around New England, Bedford’s Patrick Harrington has looks at Legion ball as a godsend.

Harrington came off a dynamite season with the Bedford High baseball team, closing out a superb career.

He’ll head to Assumption in the fall, where he’ll join the Greyhounds’ pitching staff.

But he needed a vehicle in between. Enter Merrimack Legion Post 98.

“I aged out of AAU baseball,” said Harrington, just after a sparkling Merrimack debut, in which he allowed only one run on two hits, working into the seventh inning off a nine-inning 2-1 win. “This was the closest Legion team to me, and it’s proven to be the best option.

“I’ve only been here a few days and it’s easy to see this is a great team. The guys here (nearly all from either Merrimack High or Bishop Guertin High School in Nashua) have welcomed me as the new guy. It feels like I’ve been playing with all of them for years.”

American Legion baseball has shrunk in numbers throughout the state as players believe they will see greener fields in travel or AAU ball.

But the talent level at Legion ball remains strong.

Rules to go from nine-inning games back to seven inning games has helped to keep players around. In addition, a few years back, the age limit was raised to 19, helping to keep players like Harrington or even younger athletes returning from their first year of college, like his Legion teammate and standout pitcher/shortstop Justin Grassini in the game.

The first step for Harrington, though, was to rinse the final memory of his high school career, the Bulldogs’ state title game loss to Exeter at Northeast Delta Dental Stadium. out of his mind.

“It took a while to really get over it,” Harrington

“I was really happy to get into the Legion season and get that off to a good start.”

There was an extended period between the two seasons, and Harrington didn’t waste any of his time.

“I worked out a lot and did some extensive work with my pitching coach,” said Harrington.

“I wanted to keep my conditioning up.

“And I wanted to work on correcting things, trying to get back any of the mechanics that I may have lost during the high school season.”

Apparently, the work was well worth it with Harrington carrying the no-hitter into the seventh inning of the opener, at least according to the official score book.

The righty wiggled out of a jam in the fourth when he hit two batters, and he potentially lost the no-hitter in the sixth, when a hard two-hopper sneaked under a glove at third (ruled an error).

“I wanted to try and not think about it, but when the opposing dugout is yelling that you still have a no-hitter going (in the seventh), it’s going to get in my head,” said Harrington.

The first hit, a one-out triple to right in the seventh, was certainly a clean one.

“He found a gap, and that’s going to happen,” Harrington said.