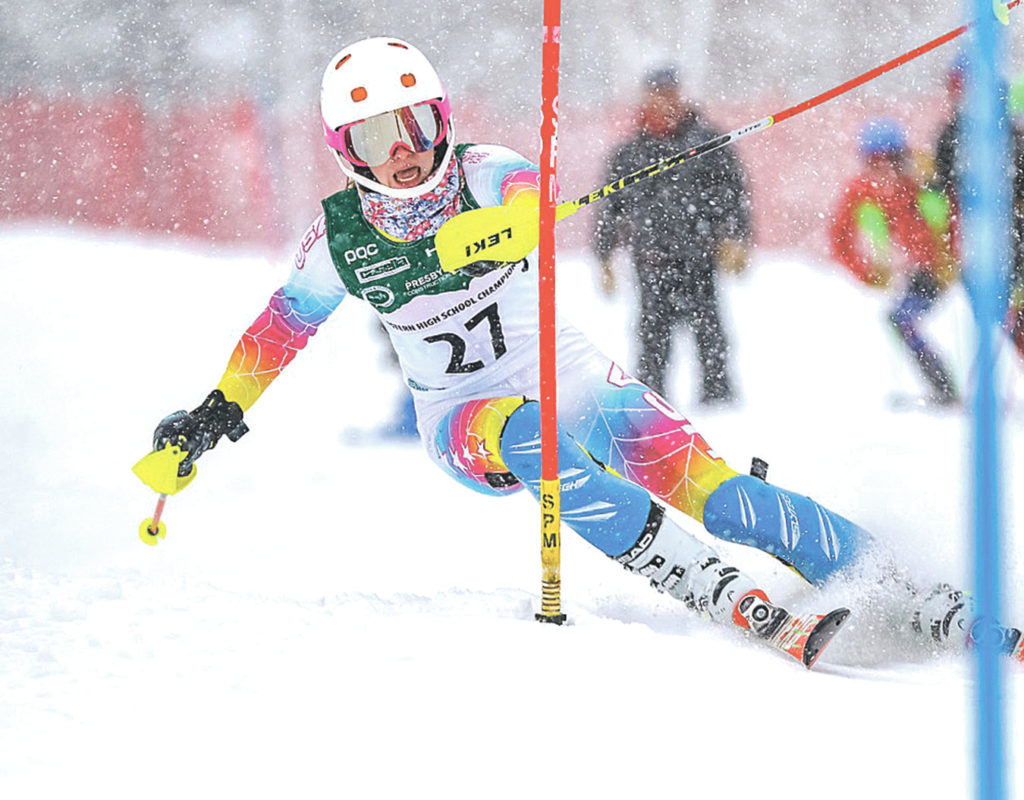 HOLLIS – The snow is dripping away here in Southern New Hampshire, but Hollis Brookline High School alpine ski champion Stephanie Menard isn’t about to hang the skis up just yet.

“I think I’ve got at least two more weekends in me,” said Menard, who spent last weekend taking first in the Governor’s Cup Race at Loon Mountain in Lincoln. “Basically, I’ll keep going until it all melts

And why wouldn’t the Cavaliers’ junior? With the ski-racing winter she’s had, you can understand why Menard wouldn’t want it to end.

Competing for the HB team, Menard won 6 of the 10 races held during the regular season at Crotched Mountain.

At the Meet of Champions, she posted the greatest highlight of her season, beating the field in giant slalom, which really isn’t her specialty.

“Everyone in the state was there, and it’s a pretty big accomplishment,” said Menard. “It’s basically my first big win in giant slalom.”

Menard went on to represent Team New Hampshire, capping her season at Eastern Regionals (all states east of the Mississippi) and took ninth in the slalom there.

It was a huge high school year, but only a fraction of what has become the busiest of winter seasons.

“Being so competitive, you put in a lot of practice and a lot of time spent at the mountain,” said Menard, who also races weekends for the club team at Loon. “During the week, we train at Crotched Mountain, and that’s basically 45 minutes from our school.

On the weekends, it’s up to Loon, where the team hits the hill first thing in the morning.

Of course, Menard would have it no other way.

About 10 years ago, she fell in love with skiing, but first tried to compete as a freestyler.

“I really didn’t like freestyle, but I knew how much I liked skiing, so we tried racing,” she said.

She and her twin sister Isabelle chose to stay home and attend HBHS instead of looking into the ski academy route.

Both Menard girls wanted to remain well-rounded. And while skiing forces some sacrifices — “I didn’t get to go to our championship basketball games this winter, and I wish I could have,” Stephanie said — they’ve accomplished their goals.

Both girls played varsity soccer in the fall and are partners in the spring with the school’s unified track team.

In addition, Stephanie is a straight-A student, taking a course load that includes an AP class and three honors courses.

“Our high is a good high school, and we’ve done well,” she said. “If I went to a ski academy, it’s basically ski half the day, go to school half the day. All skiing all the time.”

Still, she’s always on the go.

Like most juniors, Stephanie is already looking to that next step. She’s talking about potentially studying medicine. But the recent success on the slopes has added a new dynamic to the equation.

There’s plenty of time to think about that, though.

Menard still has another year-plus to take on the rigors and joys of high school. And she has Isabelle right with her, taking every step.

“We are really competitive you know. I always compare myself to her,” said Stephanie. “She’s my best friend. I do everything with her, and we do everything together.”

The competitiveness certainly flows on the slopes. While Stephanie grabbed the headlines, Isabelle was no slouch, taking seventh at the state meet in slalom.

“She beats me up in training,” said Menard. “I know how to handle my nerves on race day. That’s really the only difference between us right now.”