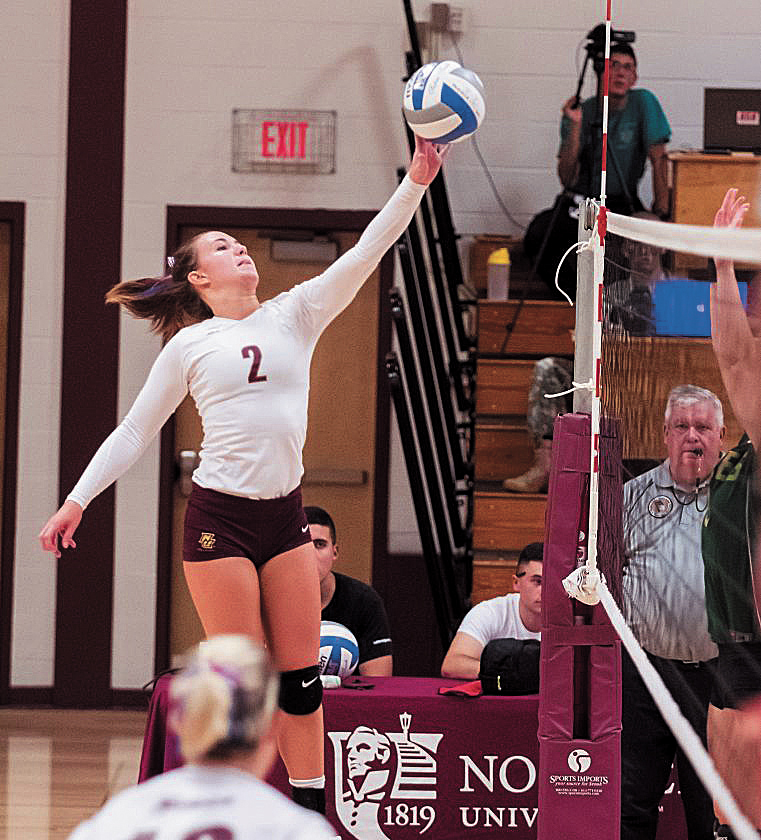 Norwich University women’s volleyball coach Ashlynn Nuckols went to Brookline’s Monika Schneider a month ago and told her there was an award she felt the Cadet senior would be perfect for.

It was the school’s prestigious Charles F. Crosby Courage award, honoring a graduating senior athlete or manager who had overcome adversity during their time at the school.

What could be more adverse for a college athlete than two straight years of injuries wiping out her junior and senior seasons, as well as four surgeries her senior year?

Thus it was no surprise a few days ago when she received the award.

“I was very honored to even be selected,” Schneider said. “I didn’t think I was going to get it. I was very excited about it.”

Just as excited as she was to get her diploma after cramming in six courses and resolving an incomplete after her four surgeries for a torn Achilles that took away not only her senior season, but her fall semester as well.

And all that came after Schneider, who played on the Hollis Brookline High School 2015 state title team, had fought her way back from a non-displaced fracture of her right foot suffered just before her junior season was about to start. She was in a boot the entire season. It was a far cry from her first two years at Norwich when she played in all 26 matches, and was an impact player from the start, leading the Cadets in kills her freshman year and then had 134 kills her sophomore season as an undersized (5-6) outside hitter.

Her rehab from her first injury was extensive, and she had only three months to get back in shape for her senior year.

“Then the second day of preseason, the first practice of the day, I stepped forward on the court to transition to hit a ball, and I heard a popping noise,” she said.

She then tried to step and couldn’t put any weight on her left foot. At first it was thought to be just a sprained calf, and she was on crutches and then in a boot again. But a few weeks later she had more issues and it was discovered she had a ruptured Achilles.

She had surgery this past October, but later developed an infection in November and needed three additional surgeries, including taking a skin graph from her forearm to cover the Achilles, and then a skin graph from her thigh to cover the forearm, then a tendon from her foot for the Achilles. Then a further complication developed while she was in intensive care and she needed a fourth surgery.

“I had three different nurses who were coming,” she said. “It was a very long process. Now I’m able to walk, I just have to concentrate on running and jumping.”

Schneider wasn’t sure she’d be able to play volleyball again, especially after the surgery to her arm, so she never tried to get a redshirt waiver for her two lost seasons. She may instead play in a local adult recreation league to continue playing the sport she’s loved since her days in middle school.

“I still can’t jump,” she said, adding she’d check with Norwich if she indeed does have remaining eligibility. “It was definitely really hard sitting on the sideline my junior year after starting my first two years. And I knew I’d have to fight for my position (going into her senior year) before those surgeries. But it was good I was able to cheer on my team and go to as many games as I could before I had to go to surgery.

“I would’ve been much more upset if I had to be in the hospital for the whole season.”

“Monika has showed everyone on our team that even if you can’t participate in the sport you can still be a part of the team as much as anyone,” said Nuckols. “She has shown so much strength and acceptance through this past year with her injuries.”

It was a tough year, period. Schneider also had to endure a couple of things in her personal life, including the death of her grandmother. But last weekend she got her degree in business management with a concentration in marketing. Being able to actually finish her classes from home in Brookline online helped since she had limited mobility when she was on campus. She even took a course online during her hospital stay so she could graduate on time.

Schneider also did some research and watchd a few videos about Crosby, who fought leukemia for 15 years while a full time employee of the school.

“Charlie’s story has shined a new light on what I have gone through,” Schneider said. “It is a true honor to have been chosen for this award and I will work hard to emulate Charlie’s story in my everyday life so his legacy lives on.”

Schneider has left quite a legacy herself.

“It was definitely hard,” Schneider said, “not having that (volleyball) escape. You just work as hard as you can and eventually things will get better.”

The New England Independent Baseball League has been around since earlier this decade when it replaced New ...